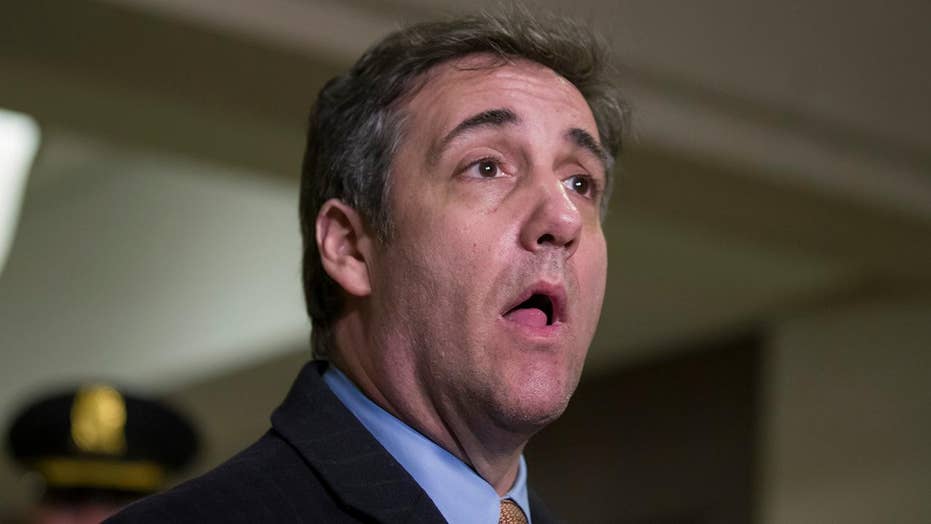 Michael Cohen is facing steadily mounting criticism over apparent inconsistencies in his testimony before the House Oversight Committee last week, concerning his statements on everything from a potential pardon to the Trump Tower Moscow project to his prospects for a job in the Trump administration.

The former personal attorney to President Trump dished to lawmakers on a range of scandals connected to the president, providing Democrats with numerous leads regarding potential wrongdoing in the president's business dealings and more. In the wake of the testimony, several committees have ramped up their anti-Trump investigations. Yet the veracity of Cohen's testimony has been challenged on several fronts, with some Republicans claiming he may have committed perjury.

“As I warned before Mr. Cohen’s appearance before the Oversight Committee, relying on an admitted liar to attack the President is beneath the dignity of the People’s House,” committee Ranking Member Jim Jordan, R-Ohio, said in a statement Thursday, urging committee Chairman Elijah Cummings, D-Md., to join his call for a Justice Department review of Cohen’s testimony.

One section of Cohen’s testimony that has come under scrutiny was his claim that he “never asked for, nor would [he] accept, a pardon from Mr. Trump.”

But on Thursday, Cohen’s attorney, Lanny Davis, said that Cohen was “open to the ongoing ‘dangling’ of a possible pardon by Trump representatives privately and in the media.” Davis also said that Cohen “directed his attorney to explore possibilities of a pardon at one point with Trump lawyer Rudy Giuliani as well as other lawyers advising President Trump.”

Davis, defending his client’s credibility, did say, however, that since July 2, 2018 when he began representing Cohen, he has said that he “would never accept a pardon from President Trump even if offered.”

“That continues to be the case,” Davis said. “And his statement at the Oversight Hearing was true—and consistent with his post joint defense agreement commitment to tell the truth.”

“Never means never ever not after July 2, 2018, which is the latest deception. Another perjury and more prison,” Giuliani tweeted, adding later: “The defense now to Cohen saying under oath he NEVER asked for a pardon is a familiar one; What’s the Meaning of Never. Serial liars often try the same deception too often. Let’s hope Congress and DOJ are outraged at Cohen’s disrespecting them by perjuring himself repeatedly.”

Giuliani added: “I’m still waiting for the House Dems to demand a perjury prosecution for the man who made fools out of them by lying under oath. Do they care about the truth? Or is it get Trump at any cost, even to their own integrity?”

Cummings, during a committee hearing Thursday on a separate matter, said he was a “deliberate” person and would look at Cohen's testimony when challenged by Jordan. A spokesperson for Cummings did not respond to Fox News’ request for comment on the timeline for when he might review the hearing transcript.

Meanwhile, Cohen has been criticized for his statements about potentially working in the Trump White House. During the hearing last week, Jordan accused Cohen of turning on the president because he didn’t land a job at the White House. Cohen denied this,  saying he just wanted to be “the personal attorney to the president.”

“I got exactly what I wanted,” Cohen testified.

During the hearing, the president’s sons, Donald Trump Jr. and Eric Trump sought to fact-check Cohen on Twitter.

“Michael was lobbying EVERYONE to be ‘Chief of Staff.’ It was the biggest joke in the campaign and around the office. Did he just perjure himself again?” Eric Trump tweeted last week.

Shortly afterward, Davis acknowledged that Cohen was, in fact, at one time considering the possibility of working in the White House.

“The fact is, early on, Michael Cohen speculated about a possible position in the White House,” Davis said in a statement. “But after he consulted with his family and friends, he decided that he preferred to stay at home in New York City and be ‘personal attorney to the president.’”

Another inconsistency is related to the Trump Tower project in Moscow. Cohen is going to jail, in part, for lying to Congress during a closed-door hearing with the Senate Intelligence Committee in 2017 about the timeline of communications with Russia about the project. Cohen initially told the committee communications ended before the first contest in the 2016 primary season but later admitted they continued through June 2016, after Trump had become the Republican nominee.

During last week’s hearing, Cohen told the committee that Trump’s attorneys, including Jay Sekulow,  reviewed and edited the statement he provided to Congress in 2017 about the project, including concerning the timeline of discussions.

But Sekulow said in a statement after the hearing last week that the “testimony by Michael Cohen that attorneys for the President edited or changed his statement to Congress to alter the duration of the Trump Tower Moscow negotiations is completely false.”

And Fox News reported on Wednesday that records show "the original date in the original draft" of Cohen's false congressional testimony on the conclusion of the failed Moscow negotiations was January 2016 -- undercutting allegations that Trump attorneys made edits to alter the negotiation's timeline.

The questions emerging since the testimony speak to the concerns Republican lawmakers voiced when Cohen was before the panel last week.

“It’s the first time a convicted perjurer has been brought back to be a star witness in a hearing, and there’s a reason this is a first, because no other committee would do it,” Jordan said in his opening statement last week, taking a swipe at Cummings.

Cohen’s testimony slamming the president as a conman also came under question following the revelations of a book proposal he shopped around just weeks before the FBI raided his office as part of the U.S. Attorney for the Southern District of New York’s criminal investigation into his personal business dealings.

The book proposal reportedly portrayed Trump in a positive light, countering negative descriptions of his then-boss.

“All of these things have been said about my longtime boss, Donald J. Trump. None of it is true,” the proposal reportedly said.

Cohen testified that Trump was a “racist” a “conman” and a cheat.”

Trump, himself, weighed in on Cohen’s testimony.

“Book is exact opposite of his fake testimony, which is now a lie!” Trump, in part, tweeted last week. “Congress must demand the transcript of Michael Cohen’s new book, given to publishers a short time ago. Your heads will spin when you see the lies, misrepresentations and contradictions against his Thursday testimony. Like a different person! He is totally discredited!”

Davis, in response to the reports, said in a statement: “Sometime in early 2018, Mr. Cohen was offered a substantial advance for a proposal regarding a book on understanding Donald Trump. Mr. Cohen ultimately elected not to proceed. In other words, POTUS has yet lied again...but what’s the difference between 9000 or 9001 lies?”

Fox News' Gregg Re, Catherine Herridge, and Kristin Brown contributed to this report.