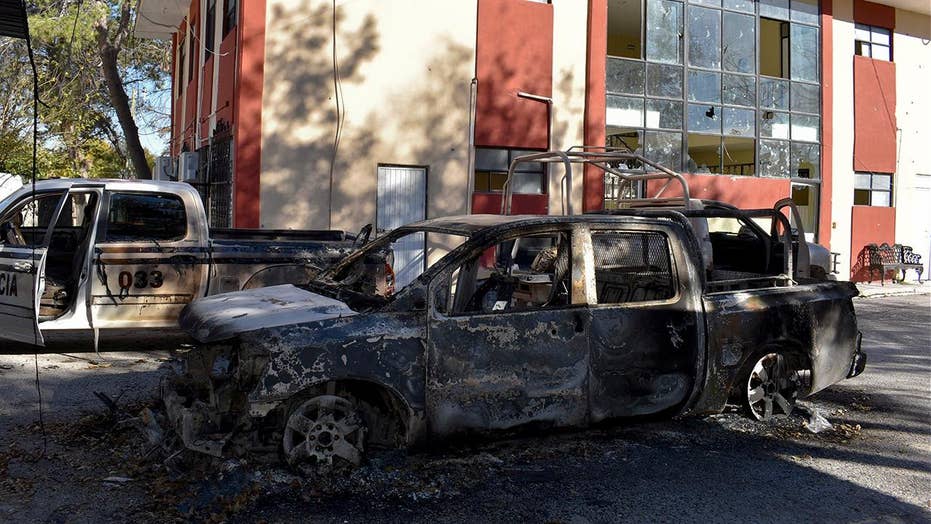 At least 21 people killed in a gunbattle near Texas border between suspected members of the drug cartel and police; Fox News contributor Tom Homan weighs in.

The Mexican cartels are coming under increased pressure from U.S. lawmakers.

Sen. Tom Cotton, R-Ark., is expected to introduce on Wednesday a bill to subject certain foreign criminal organizations – namely the cartels – to the same level of sanctions as terror groups. It comes after President Trump last month announced that plans were in motion to designate the drug-trafficking enterprises south of the border as foreign terrorist organizations, or FTOs.

“Criminal organizations and drug cartels like the one responsible for last month’s attack in Mexico ought to be treated just like terrorist groups in the eyes of the U.S. government,” Cotton told Fox News in a statement, referring to the early November slaying of nine U.S. citizens from the Mormon community in the northern state of Sonora.

“This bill would help stop cartel violence by ensuring these groups, and anyone who helps them, face dire consequences for their actions,” he added.

The sanctions include prohibiting organization members and their immediate families admission to the United States, freezing assets, and seeking civil and criminal penalties against individuals providing material assistance or resources to the organization.

Moreover, the bill mandates that the president submit a report to Congress with the government’s findings on the Nov. 4, 2019 attack on U.S. citizens in northern Mexico once the investigation is completed, including whether the organization responsible should be designated a significant TCO.

The act defines “membership in a significant transnational criminal organization” as direct members and/or their spouse and child. But it carves out an exemption for those “who did not know, or should not reasonably have known, that his or her spouse or parent was a member of a significant transnational criminal organization or whom the Attorney General has reasonable grounds to believe has renounced” to such membership.

The bill comes at a time when cartel violence is spiking and the U.S. is battling unprecedented levels of drug-related deaths and overdoses. New Acting Homeland Security Secretary Chad Wolf has also vowed to go after cartels and other gangs fueling chaos at the border.

Meanwhile, it remains to be seen if and when Trump's FTO designation on the cartels will come to fruition, a move that has generated both praise and criticism. Terrorist designations are handled by the U.S. State Department. Once a group has been slapped with such a designation, known members are prohibited from entering the country, and it is then illegal for those in the U.S. to intentionally provide support to them. Financial institutions are also barred from doing any type of business with the organization or its members.

“The FTO designation is an important step in a positive direction for U.S. national security. Too many Americans have died as the ruthless cartels have made billions by terrorizing communities and killing at unprecedented levels. It's clear President Trump always places the safety of Americans first,” noted Derek Maltz, a former special agent in charge of the Drug Enforcement Administration Special Operations Division in New York. “Designating the cartels as terrorists and implementing a focused operational plan will save a tremendous amount of lives.”

The FTO tag could also mean that an American in an inner-city gang selling street drugs that originated from south of the border could be prosecuted under anti-terrorism laws – possibly being given a life sentence.

A boy pauses as he speaks next to the coffins of Dawna Ray Langford, 43, and her sons Trevor, 11, and Rogan, 2, who were killed by drug cartel gunmen, during the funeral at a family cemetery in La Mora, Sonora state, Mexico, Thursday, Nov. 7, 2019.(AP Photo/Marco Ugarte)

According to the latest annual assessment from the DEA, Mexican drug trafficking organizations pose the greatest crime threat to the U.S. and are continuing to “expand their control of the opioids market” in conjunction with the deadly spike in overdoses in recent years. However, officials have also lamented that “the scope of violence generated by Mexican crime groups has been difficult to measure due to restricted reporting by the government and attempts by groups to mislead the public.”

Moreover, Mexico’s homicide rate – routinely driven by cartel-connected violence – is on the path to reaching record levels this year, even higher than the record numbers set in 2018 when more than 30,000 people were killed.