Attorney General Merrick Garland faced tough questions on a wide range of subjects Thursday at a House Judiciary Committee hearing dedicated to oversight of the Justice Department at a time when the agency is in the middle of several high-profile cases and controversies.

One main issue that Republicans seized on was Garland's recent memo to Justice Department employees about intervening in incidents of violence or intimidation targeting state and local school board officials. GOP lawmakers have criticized Garland for overstepping by getting involved in matters that should be handled by state and local law enforcement, and for issuing the memo days after the National School Boards Association asked the Biden administration to utilize tools, including the terrorism-related Patriot Act, to deal with these situations. The NSBA cited incidents of nonviolent disruption of school board meetings where parents voiced their concerns about issues such as the teaching of critical race theory, prompting Republicans to voice fears that federal involvement will influence conservatives to keep quiet instead of continuing to engage with officials.

Committee ranking member Rep. Jim Jordan, R-Ohio, attempted to show a video of parents at school board meetings during his opening remarks, but Chairman Rep. Jerry Nadler, D-N.Y., refused, claiming that Jordan did not provide 48 hours' notice. Jordan stated that there is no official rule requiring such notice, but Nadler did not allow the video to be shown.

Garland did not directly address the school board issue in his opening statement. He did make general comments about protecting Americans from threats, while also safeguarding people's freedoms.

"Every person living in this country expects and deserves that their government protect them against a wide range of threats – from international and domestic terrorism to cyber-attacks to violent crime and drug trafficking," Garland said in prepared remarks submitted to the committee. "As our country’s chief law enforcement officer, I am committed to supporting law enforcement at all levels as they work to protect our country from these threats, while also zealously guarding civil liberties and ensuring our own accountability to the American people."

Rep. Steve Chabot, R-Ohio, was the first of several Republicans to bring up the school board issue at the hearing, telling Garland that he "found it deeply disturbing that the National School Boards Association convinced the Biden administration to sic you and your Justice Department, the FBI … on involved parents as if they were domestic terrorists."

Chabot noted that he and Nadler were both on the committee when Congress passed the Patriot Act, and that at the time they both had concerns about how the law could be used or abused.

"I can tell you, not in a million years did we dream that one day we would see the Justice Department treat American parents as domestic terrorists," Chabot said.

"No one has the right to be violent or threaten violence" he added. He stated that violent actors can be dealt with by security or other officials, "but we don’t need the vast power of the federal government throwing its weight around."

In response, Garland noted that his memo did not mention domestic terrorism or the Patriot Act, and did not envision such issues coming into play regarding school board incidents.

"Like you, I can’t imagine any circumstance in which the Patriot Act would be used in the circumstances of parents complaining about their children nor can I imagine a circumstance where they would be labeled as domestic terrorists," he said. 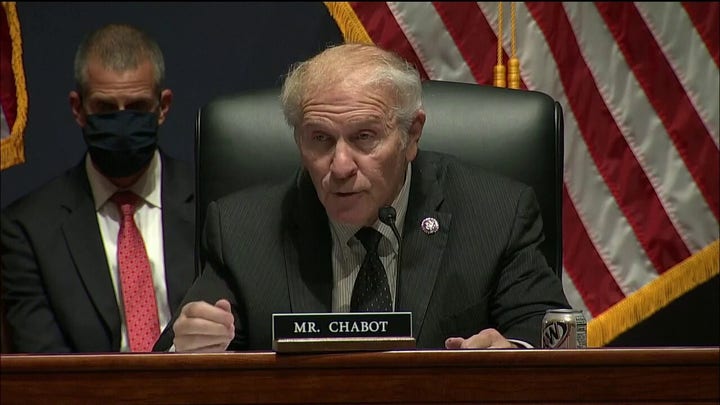 When asked who from the White House and DOJ had that conversation, Garland said he did not know.

In a tense exchange, Rep. Mike Johnson, R-La., mentioned how Garland's son-in-law works for a company that publishes materials on critical race theory, a main issue being raised by parents complaining to school boards. Johnson asked if Garland had any agency ethics official review the situation and issue guidance before issuing the memo.

Garland said that nothing in his memo has to do with financial interests or the substance of what is being taught in schools, but deals with "violence or threats of violence."

"There are no conflicts of interest that anyone could have," Garland said, adding that he is "exquisitely aware" of the relevant ethics requirements.

Rep. Jamie Raskin, D-Md., defended Garland's memo, arguing that there is nothing wrong with it, and that it addresses a real concern of right-wing violence throughout the country, including "a dramatic uptick" in violence against school officials. He cited news articles about incidents of violence and death threats against school officials, including one where a parent ripped the mask off a teacher's face and another where a teacher was hospitalized after a parent allegedly attacked them over a face mask rule.

"I’m limited by time here, but there are cases like this across the country," Raskin said.

Other Democrats focused on issues related to the Jan. 6 Capitol riot, former President Donald Trump, and Trump's associates. Early on, Nadler asked about former Trump adviser Steve Bannon's refusal to comply with a subpoena issued by a select committee investigating the riot, and whether the Justice Department would "expeditiously consider the referrals put forth by the select committee" if the full House approves them later in the day.

"The House of Representatives votes for the referral of a contempt charge. The Department of Justice will do what it always does in such circumstances. It will apply the facts and the law and make a decision consistent with the principles of prosecution," Garland replied.

Rep. Pramila Jayapal, D-Wash., questioned whether the DOJ was being too soft on those involved in the Jan. 6 riot, noting that no one had been sentenced to jail time for a misdemeanor charge until nine months after the incident.

Jayapal asked if DOJ headquarters approves all plea agreements in these cases. Garland said he would not go into specifics, but he did explain that there are guidelines that federal prosecutors follow when it comes to what sorts of pleas they can accept. He also disputed the notion that the cases have been delayed, arguing that "this is really not long at all" compared to other cases, especially given that many defendants had to be tracked down and brought to Washington, D.C.

Rep. Steve Cohen, D-Tenn., focused on several issues related to Trump. First, he referred to the Senate Judiciary Committee's recent report on efforts by the former president to have Justice Department officials contest November's election results. Cohen asked if any of the DOJ employees involved are still with agency.

Garland said that he was not certain, but that the main players involved were political appointees who are not part of the current administration.

Cohen also challenged Garland's decision to have the DOJ get involved in defending a defamation case against Trump brought by E. Jean Carroll, who claimed he raped her.

"Sometimes being the AG and sometimes being the judge means taking positions with respect to the law that are required by the law but which you would not take as a private citizen," Garland said, clarifying that the DOJ was not defending whether Trump’s words constituted defamation, but  was dealing with the application of the Tort Claims Act.

Cohen then asked about a potential investigation of Trump for possible campaign finance violations related to the payment made to Stormy Daniels in exchange for her silence regarding allegations of an affair between her and Trump. Former Trump attorney Michael Cohen pleaded guilty to various offenses, stating in court that "Individual 1," understood to be Trump, directed him to engage in criminal conduct.

Rep. Cohen noted that while Trump could not be indicted while in office as per DOJ policy, he is not longer a sitting president. He asked whether not investigating or prosecuting Trump for this is an abuse of equal protection. Garland replied that the norm of the DOJ is not to comment on whether they are investigating something or what the status is unless there is a charge, regardless of the people involved.

Rep. Scott Fitzgerald, R-Wis., meanwhile, asked about Special Counsel John Durham's investigation of the origins of the Russia probe. The congressman asked Garland if he could commit to allowing Durham to continue his work without outside political influence.

Garland said that normally he would not comment on an ongoing investigation, but pointed out that Durham's investigation remains active after the recent beginning of the new fiscal year, so it is safe to assume that his budget has been approved.

Other issues raised included the ongoing surge of migrants crossing the southern border. Rep. Tom McClintock, R-Calif., noted that a record 1.7 million people have been arrested for allegedly crossing illegally so far in 2021. When asked how many of these people are facing prosecution, Garland noted said he did not know the answer.

McClintock asked if the failure to prosecute migrants influenced people's decisions to cross the border into the U.S.

"I think there are a substantial number of issues driving migration to the United States," Garland said. 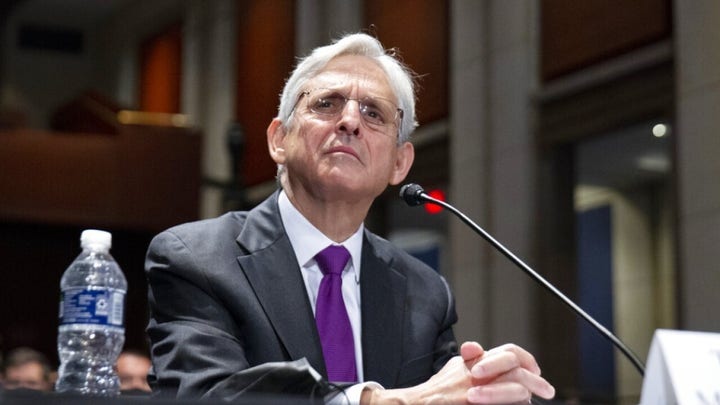 McClintock then asked if people who enter legally but overstay their visas should return to their countries. Garland said those people should respect American law, but that it was up to the Department of Homeland Security to handle those situations.

McClintock and Rep. Ken Buck, R-Colo., both asked about Hunter Biden and whether a special counsel should be appointed to investigate him and his finances. Buck brought up how a painting by Biden – not otherwise known for his artwork – was sold for $500,000. He argued that this was solely because of his family ties to the White House, and noted that the gallery that bought Hunter’s painting had their COVID relief loan "more than doubled by the Biden administration" and "received by far the largest SBA disaster loan"

McClintock referenced reports that the younger Biden's finances had been intermingled with President Biden's. Both Republicans asked about appointing a special counsel to investigate. Garland said he could not comment, offering a reminder that there is an ongoing federal investigation of Hunter Biden.