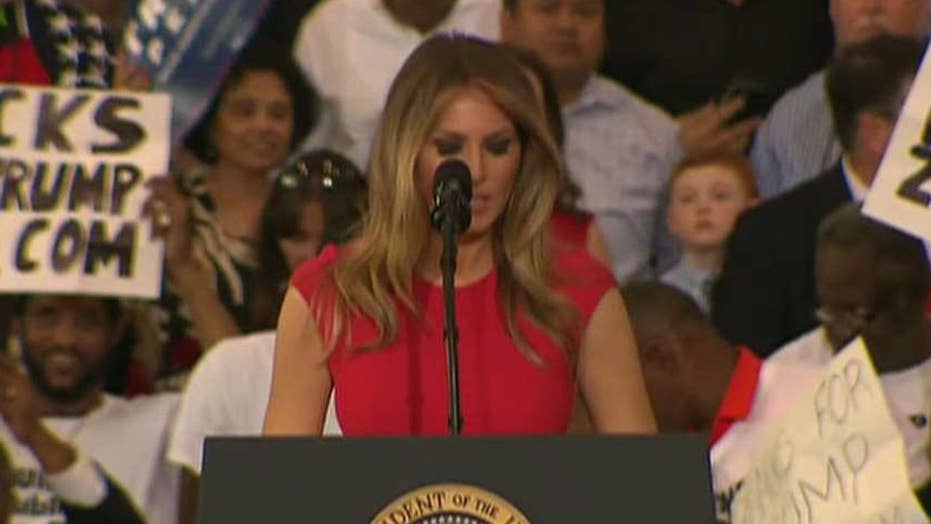 Leftists on social media tore into First Lady Melania Trump, mocking her accent and religion and branding her everything from a hostage to a whore – all for the secular offense of reciting “The Lord’s Prayer.”

Melania Trump began President Trump’s rally Saturday in Florida by delivering the prayer, which Christians – many of whom recite the prayer in church each week – believe was first said by Jesus Christ. The crowd at Orlando-Melbourne Airport received the prayer enthusiastically.

Left-leaning social media users were a different story, however.

“Melania starts the dictatorship rally with the Lord’s Prayer? NOT EVERY AMERICAN IS CHRISTIAN!!!! Country over party,” tweeted @JaimePrimak.

Melania starts the dictatorship rally with the Lord's Prayer? NOT EVERY AMERICAN IS CHRISTIAN!!!! Country over party. pic.twitter.com/CX9MxvP915

Several Twitter users harkened to the controversy over Melania Trump plagiarizing a section of her Republican National Convention speech from a previous speech given by former First Lady Michelle Obama.

“At least this time Melania plagerzed [sic] the Lord’s Prayer from the Bible instead of Michelle Obama. #TrumpRally,” @ParaComedian09 wrote.

At least this time Melania plagerized the Lord's Prayer from the Bible instead of Michelle Obama. #TrumpRally

Noticing that Melania appeared to read the prayer from a sheet, some questioned the degree of Trump’s religious devotion, with many deriding the Slovenian immigrant’s accent.

“With an hour’s practice I could probably say the Lord’s Prayer better in Slovene than Melania Trump does it in English,” @adrianshort wrote.

With an hour's practice I could probably say the Lord's Prayer better in Slovene than Melania Trump does it in English. https://t.co/Q4ofdqeGmz

@NicoleAngeleen tweeted: “I could recite the Our Father backwards, drugged with a gun to my head. If you need to read this prayer, you’re not Christian (re: Melania).”

“God Bless her, but listening to Melania do 'The Lord’s Prayer' sounds like someone getting cursed to become a 'Dracula,'@carnojoe wrote.

And a few Twitter users even attacked Melania personally.

“….plus Melania read the ‘our father’ like a whore in confession after a night of escorting,” @TrumpUriNation tweeted.

@MattDonnelly wrote: “The way Melania choked through that Our Father tells me she has not spoken aloud for weeks.”