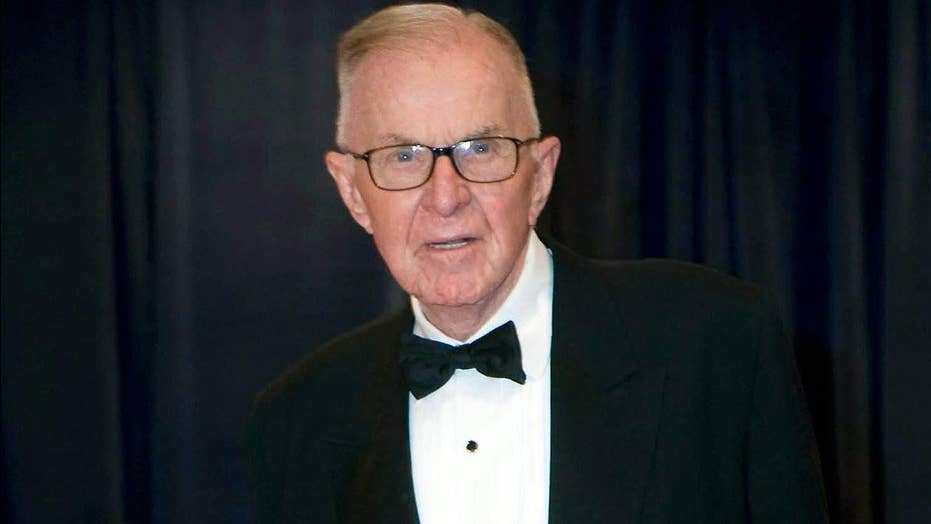 John McLaughlin, a Jesuit priest-turned-presidential speechwriter who was best-known as host of the long-running political discussion show "The McLaughlin Group", has died. He was 89.

McLaughlin's death was announced in a statement on the show's Facebook page Tuesday. Longtime "McLaughlin Group" panelist Eleanor Clift wrote that the cause of death was prostate cancer.

"For 34 years, The McLaughlin Group informed millions of Americans," the statement read, in part. "Now he has said bye bye for the last time, to rejoin his beloved dog, Oliver, in heaven."

McLaughlin missed Sunday's edition of "The McLaughlin Group", his first absence since the syndicated show debuted in April 1982. A note from McLaughlin informed viewers, "I am under the weather ... Yet my spirit is strong and my dedication to this show remains absolute!"

"The McLaughlin Group" featured the eponymous host moderating a panel of political pundits and journalists, typically two liberals and two conservatives, who quizzed, talked over and sometimes insulted each other. The show's raucous format upended the soft-spoken and non-confrontational style of shows such as "Firing Line," "Washington Week in Review" and "Agronsky & Company".

In recent years, the show billed itself as "The American Original" -- a nod to shows that copied the format.

"My feeling is talk shows have not kept pace with the breakthroughs and changes in format in television generally," McLaughlin told The Associated Press in 1986. "I began the group as a talk show of the `90s."

McLaughlin said informing an audience could be entertaining: "The acquisition of knowledge need not be like listening to the Gregorian chant."

McLaughlin himself was known for his booming voice, which cut through the babble of discussion to pronounce a panelist "WRONG!" or to announce the show was moving on to "ISSUE TWO." Every program concluded with the host's sing-song sign-off, "Bye-bye!"

At the peak of its popularity, the show was regularly lampooned on "Saturday Night Live", with Dana Carvey playing McLaughlin.

Critics said the show was more about show business and entertainment than journalism and politics. They said it celebrated nasty posturing, abhorred complexity and featured a group of mostly aging conservative white men spouting off on topics they knew little about.

"Whether it was the guerrilla strategy of Afghan mujahedeen or the next open-market operation by the Federal Reserve Board, the members of the group always seemed to have just gotten off the phone with the guy in charge," Eric Alterman charged in his 2000 book, "Sound and Fury: The Making of the Punditocracy."

But the format was hugely successful. As McLaughlin himself might have said, on a probability scale from zero to 10 -- zero meaning zero probability, 10 meaning metaphysical certitude -- in the show's heyday, the chances that the Washington establishment were faithfully tuning in each week was definitely a 10.

The show made stars of its panelists, who could go on to command high-priced speaking engagements and even played themselves in movies such as "Independence Day," "Mission: Impossible" and "Watchmen." McLaughlin also played himself on episodes of "ALF" and "Murphy Brown."

McLaughlin said his aggressive, rapid-fire questions on the show served a purpose.

"The intensity of the environment is such so that if people are hesitant to say something, they find themselves saying it anyway," he told Howard Kurtz for Kurtz's 1996 book "Hot Air: All Talk, All the Time."

"My theory is people say under pressure for the most part what they really mean," McLaughlin said. "In a confrontational situation, you'll get their gut. And I want their gut! And that's why people watch this show!"

The 1982 pilot featured syndicated columnists Jack Germond and Robert Novak as well as Chuck Stone of the Philadelphia Daily News and Judith Miller of The New York Times. Stone and Miller were quickly replaced by Buchanan and Morton Kondracke.

Fred Barnes and Clift were added in 1985, after Buchanan left to become Reagan's communications director, giving the show its first woman.

In July 1984 McLaughlin began hosting "John McLaughlin's One on One," an in-depth interview program. He also hosted a CNBC show, "McLaughlin," from April 1989 to January 1994.

McLaughlin could be a hard boss to work for. A 1990 article in The Washington Post Magazine by Alterman quoted former McLaughlin staffers Anne Rumsey, Kara Swisher and Tom Miller recalling instances of petty tyranny and McLaughlin leering at female employees.

His former office manager, Linda Dean, filed a $4 million lawsuit against McLaughlin in 1988, claiming she was fired after protesting his unwanted sexual advances. McLaughlin denied the allegations; the suit was settled out of court in December 1989.

In 1997, McLaughlin, then 70, married 36-year-old Cristina Vidal, the vice president of his production company. They divorced in 2010.

Born March 29, 1927, McLaughlin grew up in a middle class neighborhood of Providence, R.I., where his father was a furniture salesman. He trained for the priesthood at Shadowbrook, a small Jesuit seminary in western Massachusetts, and earned master's degrees in philosophy and English at Boston College and a doctorate in communications at Columbia University.

He worked as an editor at a Jesuit weekly and gave lectures on sex before shocking his friends in 1970 by switching parties to run unsuccessfully as a dovish, anti-war Republican against Rhode Island's hawkish incumbent Democratic U.S. senator.

He opened a consulting firm and gave up his Roman collar in 1975 to marry longtime friend Dore, who served as secretary of labor from December 1987 to January 1989. McLaughlin became a talk radio show host on a Washington station in 1980, but only lasted a year.

In 1982, he persuaded wealthy friend Robert Moore, a former aide in the Nixon White House, to underwrite a new form of public affairs television -- and a juggernaut was born.