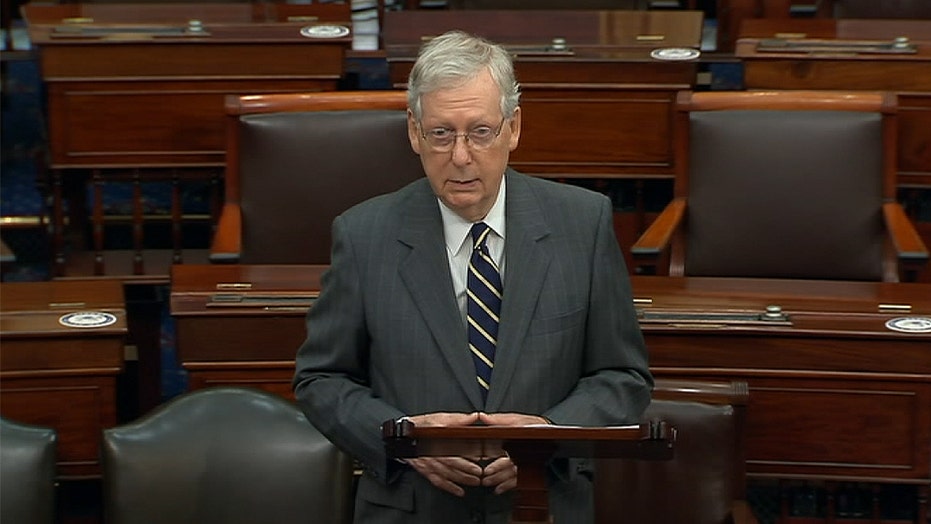 The majority leader's comments come as Congress seems far apart on a potential deal for coronavirus legislation, but as there is a heightened sense of urgency to pass a bill with boosted unemployment benefits set to expire at the end of the week.

McConnell, R-Ky., made the remarks just days before Americans will lose their boosted unemployment benefits from the federal government and, for many, their rent will come due. Democrats have said that the $1 trillion GOP proposal, which is controversial within even the Republican caucus and which President Trump called "semi-irrelevant" on Tuesday evening, does not do nearly enough. But McConnell accused Democrats of not stepping up to the table to negotiate over what he called a "serious" proposal in contrast with House Democrats $3 trillion bill that was passed in May.

"This is a more-than-fair, more-than-bipartisan framework for Democrats to engage with," McConnell said. "The only reason I can see that Speaker Pelosi and the Democratic leader would sabotage negotiations is if, as some concluded when they killed police reform in June, they actually think bipartisan progress for the country would hurt their own political chances."

On police reform, Senate Republicans put out a proposal but it never got enough support from Democrats in the Senate to clear a 60-vote hurdle to begin debate. They said it didn't go nearly far enough. House Democrats passed their own bill but the Senate never picked it up. Republicans said that bill went way too far.

The police reform issue now appears dead on Capitol Hill, with Democrats seeming happy to wait until the next term, when they perhaps will control the presidency, Senate and House of Representatives, to pass something.

That, of course, is not an option with the coronavirus bill, as increased unemployment benefits are set to run out at the end of the week and Americans' rent is going to come due with the start of the new month.

"Almost the instant we put out this proposal — which would send thousands of dollars in cash to families and even more cash to unemployed people — the Democratic Leader proclaimed, 'Those Republican hard-right money people … don’t want the federal government to help anybody,'" McConnell said. "Yesterday, after a meeting with the administration, the speaker of the House said this, quote, 'isn’t a negotiation.'"

Referencing the GOP police reform proposal spearheaded by Sen. Tim Scott, R-S.C., McConnell added: "Here we go again. It’s the script from police reform all over again. Weeks of talk from Democrats about the urgency of the issue. Weeks of Democrats thundering that people will be hurt if we don’t act. But then, when it’s time to actually make a law, Democrats would rather keep political issues alive than find bipartisan ways to resolve them."

But Democrats, chiefly Senate Minority Leader Chuck Schumer, D-N.Y., have accused Republicans of being the ones causing delays and said that the GOP proposal is too little, too late.

"Yesterday, after putting the Senate on 'pause' for three months, and after months of blocking nearly every Democratic attempt to pass legislation related to coronavirus, Senate Republicans finally revealed their long-overdue proposal for the next phase of COVID relief," Schumer said on the Senate floor Tuesday.

On the contents of the proposal, Schumer said Republicans were more focused on lobbyists than the American people.

"While the Republican proposal fails to provide crucial relief for families, workers, and the unemployed, it is littered with corporate giveaways, K Street handouts, and presidential pet projects. The Republican bill includes a $20 billion slush fund for large agribusinesses and tax breaks for three-martini lunches, but it doesn’t provide a dime in food assistance for hungry kids," Schumer said.

He continued: "It includes an unprecedented, sweeping provision to shield corporations from liability for the negligent treatment of workers and consumers [for five years], but there’s no new sweeping provision to shield Americans from evictions or foreclosures. It includes a $30 billion wish list for defense contractors but no funding to make sure Americans can vote safely in November."

And in comments on the Senate floor Wednesday, Schumer noted the significant Republican opposition to the McConnell proposal, saying, "It turns out that Senate Republicans are blocking the Republican proposal." He also said that it is "abundantly clear" the GOP bill is "not a useful starting point," invoking Trump's "semi-irrelevant" comment from Tuesday.

Despite the apparent impasse over the legislation, there remains optimism that something will get done by the end of the week.

“This won’t get done until the 11th hour,” said one senior administration source to Fox about the bill recently. That source, however, said that the bill will get done "because it has to."