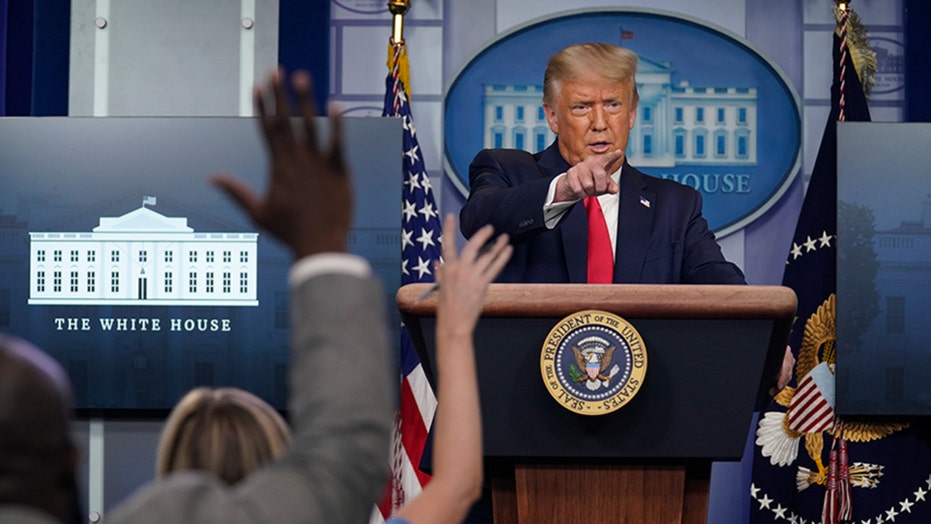 President Trump on Tuesday called the Senate Republicans' coronavirus relief package "semi-irrelevant" when asked whether he supported the legislation at a news conference, underscoring the deep divides between the White House, congressional Republicans and congressional Democrats as lawmakers scramble to pass something in the coming days.

At the end of this week, extra unemployment benefits approved in previous legislation will expire just as millions of Americans will need to pay their rent. Yet Senate Republicans are struggling to rally behind their own $1 trillion proposal, as negotiations with Senate Democrats are set to ramp up. Then the bill will have to clear the Democrat-controlled House, which passed its own $3 trillion billion bill in May.

Trump appeared to be attuned to that reality when asked whether there were any provisions in the GOP proposal that he doesn't support.

"Yeah, there are, actually," Trump said. "And we'll be talking about it. There are also things that I very much support. But we'll be negotiating. It's sort of semi-irrelevant because the Democrats come with their needs and asks and the Republicans go with theirs. So we'll be discussing that with [Senate Majority Leader] Mitch [McConnell] and all of the other people involved."

The Senate package certainly doesn't include all that Trump wants. Republicans refused to support a payroll tax cut, which Trump made clear was a priority. And Trump is right that the Senate GOP plan is almost certain to undergo a major overhaul before it reaches his desk.

“This won’t get done until the 11th hour,” said one senior administration source to Fox about the bill recently. "Because it has to."

Democrats have criticized the delays and the substance of the GOP plan.

"Republicans dithered for 3 months while Democrats pleaded for action on COVID," Sentate Minority Leader Chuck Schumer tweeted Tuesday. "And now that Republicans finally have a proposal, it’s corporate focused, doesn’t meet the needs of the American people, and half of their own caucus probably won’t support it anyway!"

Trump, however, expressed optimism that something would get done.