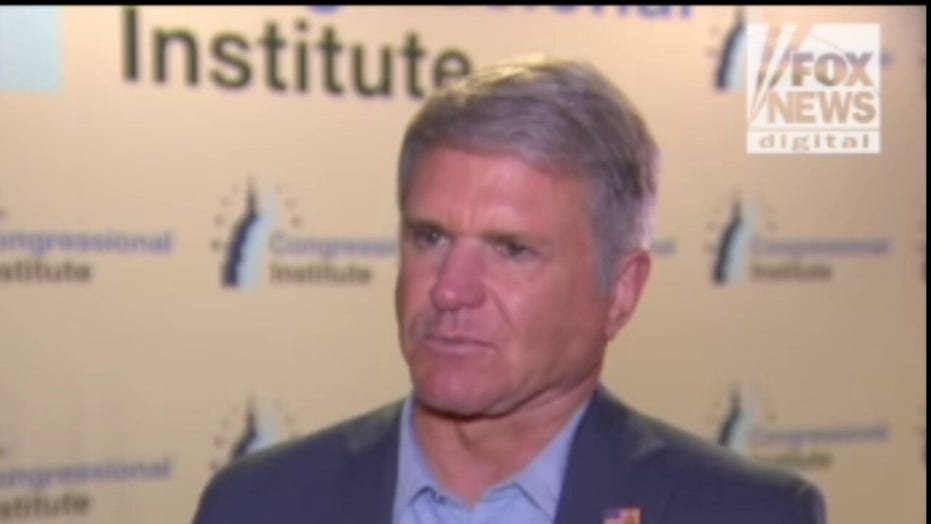 McCaul urges Biden to set 'red lines' with Russia, warns use of nuclear weapons would be 'nightmare scenario'

Rep. Michael McCaul, R-Texas, talks to Fox News Digital about Russia's war on Ukraine and what President Biden needs to do during his trip to Brussels to project American strength.

EXCLUSIVE: PONTE VEDRA, FLA.— Rep. Michael McCaul, the top Republican on the House Foreign Affairs Committee, told Fox News Wednesday that President Biden needs to set "red lines" with regard to weapons of mass destruction with Russia, warning that Moscow’s potential use of nuclear weapons "would be a nightmare scenario."

During an interview with Fox News on the sidelines of the House Republican Issues Conference Wednesday, McCaul, R-Texas, said he hopes Biden will "show American leadership" this week during his trip to Brussels for a NATO summit and later, to Poland.

"I think he has to reassure our allies that we’re with them, and also to get these Eastern flank countries, NATO countries, to put into Ukraine anti-aircraft missiles—they have them, and they haven’t agreed to send them into Ukraine yet," McCaul said. "If we could get those in, Zelenskyy would have his no-fly zone, in addition to lethal drones."

McCaul said that he feels the United States can provide Ukrainian President Volodymyr Zelenskyy with what he needs "by giving him the tools and the weapons so that he can create his own no-fly zone."

Zelenskyy has been pleading for the United States and western allies to implement a no-fly zone over Ukraine, as Russia continues to wage its multi-front war against the country.

The Biden administration, though, has warned that the creation of a no-fly zone would be seen as escalatory, and could lead to war between the United States and Russia.

"Putting NATO planes in Ukrainian airspace with Russian aircraft—you’re just asking for a collision course that will result in World War III," McCaul told Fox News. "We don’t want to escalate this conflict. It’s actually going better than we had anticipated for the Ukrainians. We just have to arm them better."

But McCaul said that this week while in Europe, he hops Biden will raise "red lines with respect to weapons of mass destruction."

"We certainly don’t want to see this escalate where Mr. Putin decides to use chemical weapons, like what happened in Syria, in the Aleppo region." McCaul said.

This week, Putin spokesman Dmitri Peskov refused to say Russia would not use nuclear weapons if it thought Russia could be destroyed. Peskov said the conditions were consistent with Russia’s national security concept.

"If there’s a threat to the very existence of our country, it can be used in accordance with this concept," Peskov stated in response to the question of whether Russia’s use of nuclear weapons could be completely ruled out, according to the Russian government-controlled news site TASS.

McCaul warned that those nuclear weapons, specifically the "short-range tactical nukes" are "of grave concern."

"The Russians are talking about that they could use these if provoked," he said. "That would be a nightmare scenario."

In order to prevent that from happening, McCaul said "American leadership is important."

"NATO has to say there are certain red lines here that are unacceptable, and that there will be severe consequences if they cross those lines," McCaul said. "That has not been done yet, but if they throw chemical weapons in or the tactical nukes, it really changes the dynamics."

McCaul told Fox News that he has spoken privately with Biden administration officials, warning them to "decide what are the red lines and what would the consequences be."

"If there are no consequences, bad behavior will continue," McCaul warned. "I don’t think we can sit back and watch weapons of mass destruction be thrown into Ukraine and it is already so horrific, the human suffering."

He added: "I think we need to send a clear signal to Putin that will not be acceptable."

Last week, White House National Security Advisor Jake Sullivan, last week, spoke with the secretary of the Russian Security Council, Gen. Nikolay Patrushev, and called for Russia to "stop attacking" Ukrainian cities and towns, while warning of "consequences" should Russia decide to use any chemical or biological weapons on Ukraine.

Sullivan's warnings about Russia's possible use of chemical weapons comes after the White House warned that Russia could use "chemical or biological weapons in Ukraine" or could create a "false flag operation" using them, after the Kremlin accused the U.S. of being involved in biological weapons research at Ukrainian labs.