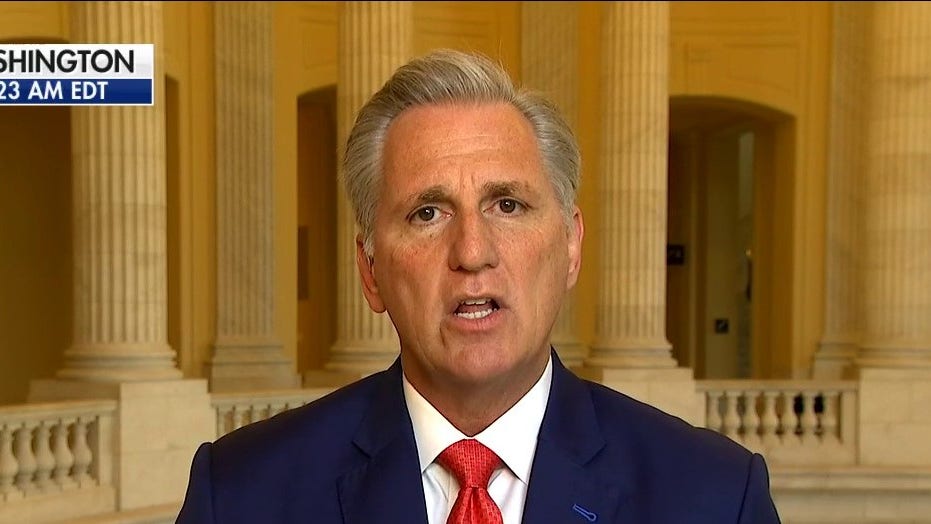 House Minority Leader Kevin McCarthy, R-Calif., threatened on Wednesday to introduce a motion to oust Speaker Nancy Pelosi, D-Calif., if she attempts to bring forth a second round of impeachment charges as a way to prevent the Senate from confirming President Trump’s Supreme Court nominee.

Pelosi has declined to rule out impeachment as an option to stop Trump’s court pick from being confirmed to the bench, arguning that Democrats will “use every arrow in our quiver” to block the eventual nominee.

“I will make you this one promise, listening to the speaker on television this weekend, if she tries to move for an impeachment based upon the president following the Constitution, I think there will be a move on the floor to no longer have the question of her being Speaker. She may think she has a quiver — we do too,” McCarthy told reporters Wednesday.

"If Pelosi and House Democrats try to impeach the president, “we will take the movement to remove her from speakership,” McCarthy said.

During an interview on ABC News’ “This Week” on Sunday, Pelosi was asked whether she and House Democrats would move to impeach the president or Attorney General Bill Barr in an effort to prevent the Senate from acting.

Even before the Supreme Court vacancy, members of the conservative House Freedom Caucus had called on McCarthy to introduce a motion to vacate, which would oust Pelosi from her role as speaker.

The potential of a motion to oust Pelosi was discussed at a closed-door meeting of House Republicans earlier Wednesday.

"Thanks to our efforts, House Republican leadership allowed us to bring this proposal for debate within our conference. I have spent many hours over the last few weeks, strategizing with my colleagues and talking to them about the necessity of taking this action," he said in a statement. "Most Republican Members of Congress wholeheartedly agree that Nancy Pelosi must be removed as Speaker of the House."

Democrats have embarked on a crusade to block Trump and Republicans from moving to fill the SCOTUS seat that was vacated following the death of Justice Ruth Bader Ginsburg.

Senate Majority Leader Mitch McConnell, R-Ky., has promised to move forward with a vote to confirm the president's nominee before the election, and Trump will announce his pick Saturday at 5 p.m. ET. Trump has said his choice will be a woman and that his list is down to five contenders.

They argue that circumstances are different now because the presidency and the Senate are controlled by the same party.