That's because the seven appointees House Speaker Nancy Pelosi, D-Calif., unveiled this week to the House Select Coronavirus Committee were all Democrats, including a fellow Californian, Rep. Maxine Waters.

No Republicans were on the list -- and McCarthy, R-Calif., said it may stay that way.

“I was clear with the speaker, I'm not convinced yet that we even participate," McCarthy told reporters Thursday, according to The Hill. "We are going to participate in everything that is fair in the process that has the Senate and has the House, it has an equal weighting."

“I'll make the decision whether we're going to participate probably next week," he added. "Because this is not viewed as something that's working for the accountability of the American public. It's viewed as purely a political operation that they chose at a time, they chose who the chair was to restructure before they even could lay out what the mission is, they voted on it without even giving the public what the mission of this will be.

"They voted on it without even giving the public what the mission of this will be." 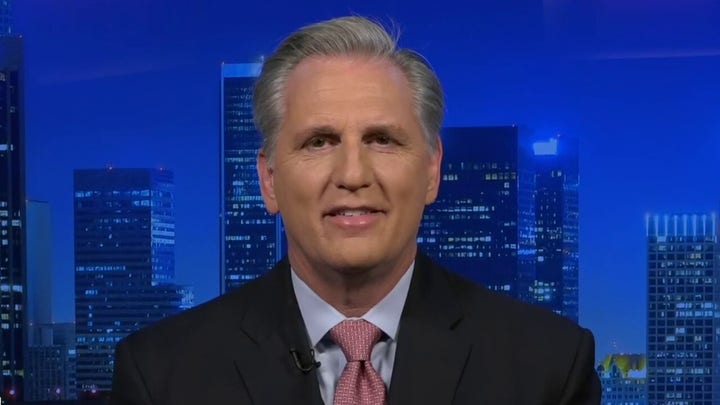 “They weighted it to be one-sided. They didn't allow the Senate in as well. She can argue anything she wants, but it's purely political, even from the people that she appointed. So I'll let you all know what my decision is next week.”

The committee is charged with overseeing how more than $2 trillion in funds from last month's CARES Act are allocated and checking in periodically with White House watchdogs to assure accountability.

“We must make sure that the historic investment of taxpayer dollars made in the CARES Act is being used wisely and efficiently to help those in need, not be exploited by profiteers and price-gougers," Pelosi wrote in a statement.

On Wednesday, Pelosi denied that politics played a role in her appointments.

“We are hoping the Republican Leader will name his members soon. We have been in communication. I told him a couple days ago who I was going to be appointing so he can make his own judgments about the committee,” Pelosi told reporters, according to The Hill.

“But we want it to be as nonpartisan as possible, and very much a part of doing the right thing for the American people," she added.

Pelosi previously appointed the No. 3 House Democrat, Majority Whip James Clyburn of South Carolina, to be the committee’s chairman.

Late last month, Waters posted a series of blistering Twitter messages criticizing the president and his administration for their response to the virus, which has now killed more than 60,000 Americans.

"Trump, stop congratulating yourself!" Waters wrote March 30. "You're a failure & you've mishandled this #COVID19 disaster! You're not knowledgeable & you don't know more than experts & generals. Your ignorance & incompetence are appalling & you continue to demonstrate that every time you open your mouth!"

On April 23, Waters revealed that her sister was dying from the coronavirus in a hospital in St. Louis.

McCarthy may appoint as many as five Republicans to the same committee but some members of the GOP, convinced the panel’s creation was politically motivated, have urged him against it, Politico reported.