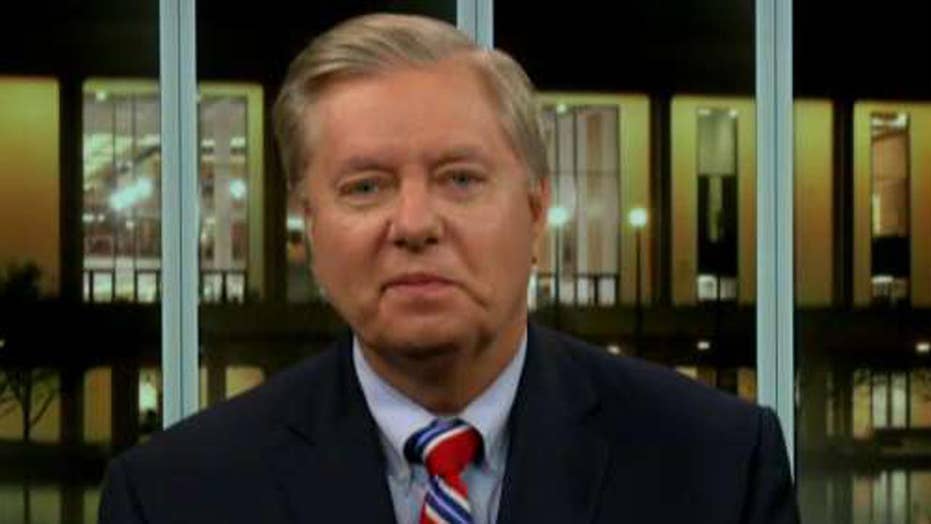 Graham: I am proud Trump made a national security decision

GOP Sens. John McCain and Lindsey Graham are among the biggest Capitol Hill supporters of President Trump’s new Afghanistan strategy but also say the plan should run through Congress.

McCain, a Navy war veteran and chairman of the Senate Armed Services Committee, said after Trump’s announcement Monday night that the president’s strategy was “long overdue,” considering the war in Afghanistan has dragged on for 16 years while Islamic terror groups continue to flourish there.

However, the Arizona lawmaker said his committee will hold a hearing on the plan in September, after Congress returns from the August recess.

“Congress must meet its responsibilities for overseeing the war in Afghanistan and providing the necessary resources for it,” McCain said. “Congress has a role to play in sending America's young men and women into harm's way, and we intend to exercise that responsibility.”

The president outlined his Afghanistan approach in an address to the American people Monday night. He declined to specify troop numbers, though a senior U.S. official told Fox News he’s signed off on a call for roughly 4,000 more troops. Trump made clear Monday that a swift withdrawal is not on the table right now, while also saying the U.S. commitment is not a “blank check” and upping the pressure on Pakistan to root out militants on its side of the border.

“The gloves are off inside of Afghanistan,” the South Carolina lawmaker told Fox News. “I can assure you a lot of people in Congress will be behind the president. … I’m very pleased with this plan. And I’m very proud of my president.”

But Trump saw some criticism from the Republican side – namely from Kentucky Republican Sen. Rand Paul, who opposes most U.S. foreign intervention. He said he “strongly disagrees” with Trump’s plan to extend the Afghanistan war -- citing the “enormous cost” to American families and taxpayers, including the 2,400 soldiers killed and the $1 trillion price tag over 16 years.

Paul is calling on Congress to vote on Trump’s plan and suggested he’ll even attempt to repeal the Authorization for the Use of Military Force that Congress approved after the 9/11 attacks.

“The Afghanistan war going beyond its original mission has an enormous cost,” Paul said in a Hill op-ed. “If the president and my colleagues want to continue the war in Afghanistan, then at the very least Congress should vote on it. I’ll insist they do this fall, and I’ll be leading the charge for 'no.'"

Graham, a member of the Senate Appropriations Committee, thinks Trump has the authority to increase troop levels. However, he suggested the president will have to go through Congress to at least get the money for additional soldiers.

“I will fight Senator Paul tooth and nail to make sure we don't lose in Afghanistan like we lost in Iraq,” Graham said.