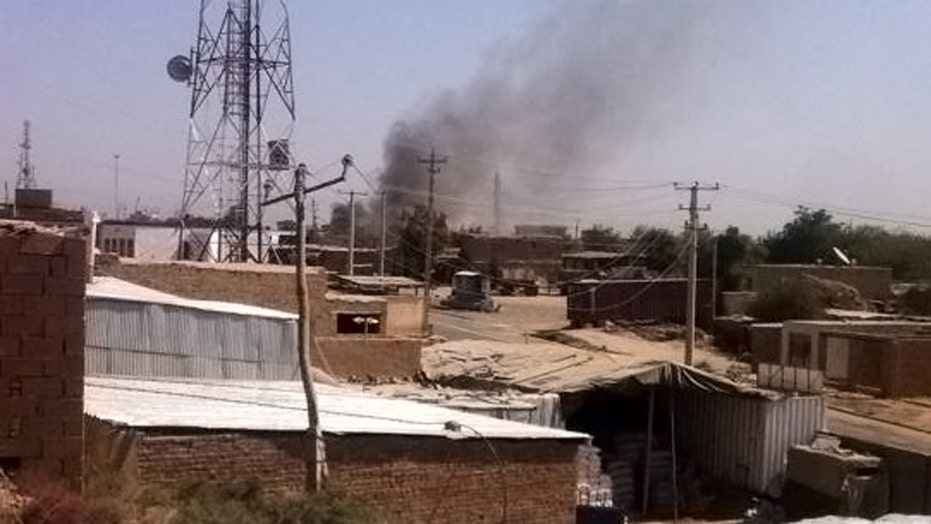 The Taliban takeover of the strategic city of Kunduz in northern Afghanistan has renewed concerns on Capitol Hill about the plan to withdraw all U.S. combat troops by the end of 2016.

The capture marked the first time a major Afghan city has fallen in 14 years.

"President Obama's calendar-based drawdown of U.S. forces in Afghanistan despite conditions on the ground has created an opening for the Taliban and placed at risk the hard-earned gains of the past decade," he said in a statement. "The Taliban's capture of the key city of Kunduz in northern Afghanistan is the latest manifestation of this dangerous reversal."

Noting that President Obama is "still on pace to withdraw all U.S. combat troops from Afghanistan by the end of 2016," McCain urged the president to "abandon this dangerous and arbitrary course and adopt a plan for U.S. troop presence based on conditions on the ground."

In the near-term, though, the U.S. military is joining the fight to try and retake the city.

As Afghan forces launched a counterattack, the U.S. military said it had carried out an airstrike on the city. A spokesman for the International Security Assistance Force said the strike was conducted to "eliminate a threat to coalition forces," adding that "limited coalition forces" in the Kunduz area are "advising and assisting" Afghan troops.

An Afghan government official in the city told Reuters there was heavy fighting in the city and said most residents were without electricity and phone service.

The debate over the pace of the U.S. withdrawal is hardly a new one.

Earlier this year, Ashraf Ghani personally voiced concerns with Obama about his country's security, on his first visit to the White House as Afghanistan's president,

After their meeting, Obama announced that the U.S. would keep nearly 10,000 troops in Afghanistan through the end of the year.

The change reflected a pause in the drawdown, though Obama stressed at the time that his goal of completing the drawdown by the end of his term had not changed. The pause also reflected a desire -- by both Kabul and Washington -- for Afghanistan not to go the way of Iraq, where the void left by U.S. troops was filled by Islamic State fighters. In Afghanistan, while there is an ISIS-affiliated presence, the Taliban still pose the biggest threat.

Obama stressed at the time that the "specific trajectory" of the drawdown for 2016 would be established later this year -- and he still wants to stick to the plan of reducing the force to a "Kabul-based embassy presence" by the time he leaves office.

Whether Obama might show more flexibility for 2016 and beyond at this stage remains unclear. Earlier this month, House Armed Services Committee Chairman Mac Thornberry, R-Texas, also warned against withdrawing too quickly.

The policy debate may hinge in part on what happens next in Kunduz.

The city fell Monday, after hundreds of Taliban gunmen launched a coordinated, multi-pronged attack at several points around the city. After a day of fierce fighting, they managed to overrun government buildings and hoisted their flag in the city square. The fast-moving assault took the military and intelligence authorities by surprise.

During the Taliban assault on the city on Monday, the insurgents had freed around 600 inmates -- including 144 members of the Taliban -- from Kunduz prison, officials said.

In Kabul, the National Security Council was to meet later Tuesday over the fall of Kunduz, a government official said, speaking on condition of anonymity to discuss government plans.