A lawyer for Andrew McCabe, the former FBI official facing the possibility of federal charges, is making a fresh attempt to pressure prosecutors to drop the case against him – citing supposed "rumors" that a grand jury has already declined to indict him.

Grand jury proceedings are highly secretive, and the status of McCabe's case remains unclear. Speculation was widespread earlier Thursday that he could soon be facing prosecution as U.S. Attorney Jessie Liu recommended moving forward with charges, and the DOJ rejected a last-ditch appeal from McCabe.

But in an unusual email sent Thursday night and obtained by Fox News, McCabe's legal team sought to pressure the Justice Department to show its cards, citing “rumors from reporters starting this morning that the grand jury considering charges against Mr. McCabe had declined to vote an indictment.”

Attorney Michael Bromwich said if this is the case, “the only fair and just result is for you to accept the grand jury’s decision and end these proceedings.” They urged the DOJ not to "resubmit" the case if "the evidence presented by your office was insufficient to convince 12 members of the grand jury to find probable cause to believe that Mr. McCabe had committed any crimes."

In another email, Bromwich wrote, "Please confirm that if this in fact occurred, you would advise us promptly."

McCabe, who was recently hired by CNN as a contributor, is the former deputy and acting director of the FBI, who spent 21 years at the bureau.

The potential charges relate to DOJ inspector general findings against him regarding misleading statements concerning a Hillary Clinton-related investigation. Last month, a source close to the process told Fox News that McCabe had a “target on his back” because of the Justice Department inspector general findings that said he misled investigators about his role in a leak to the Wall Street Journal in a story about the Clinton Foundation.

It is rare for a grand jury not to indict when presented evidence by prosecutors.

But Bromwich cited two news stories suggesting that could be the case. The letter was sent to U.S. Attorney Liu, as well as prosecutors in the Justice Department.

FEDS IN FINAL STAGES OF POSSIBLE PROSECUTION DECISION FOR MCCABE: 'TARGET ON HIS BACK’

“We do not know the specific basis for the rumors, but they were credible enough that both the NY Times and Washington Post published stories suggesting that the grand jury may have declined to vote in favor of charges,” Bromwich said. 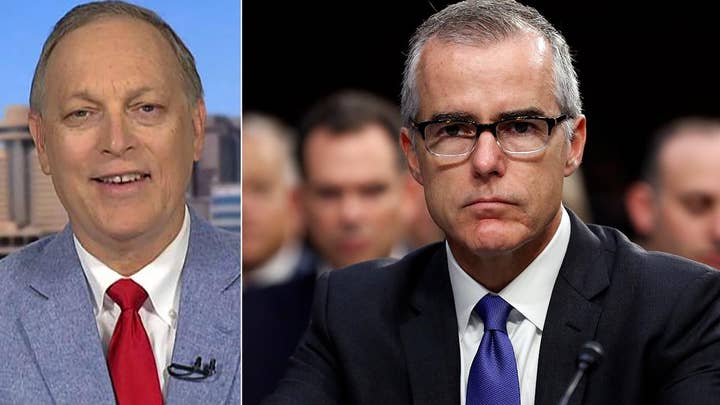 The Washington Post reported Thursday that a grand jury was recently “summoned back after a months-long hiatus to consider the case” but “came and went with no public charges being filed.” The New York Times on Thursday cited the Washington Post’s reporting.

Fox News reported Thursday that Liu recommended moving forward with charges against McCabe, and McCabe appealed the decision of the U.S. attorney for Washington all the way up to Jeffrey Rosen, the deputy attorney general under Bill Barr. But Rosen rejected that request, according to a person familiar with the situation.

McCabe’s legal team recently met with Liu in person to make an appeal not to move forward with any prosecution. They also met with Rosen, in person, for the same reason, according to a person familiar with the meetings.