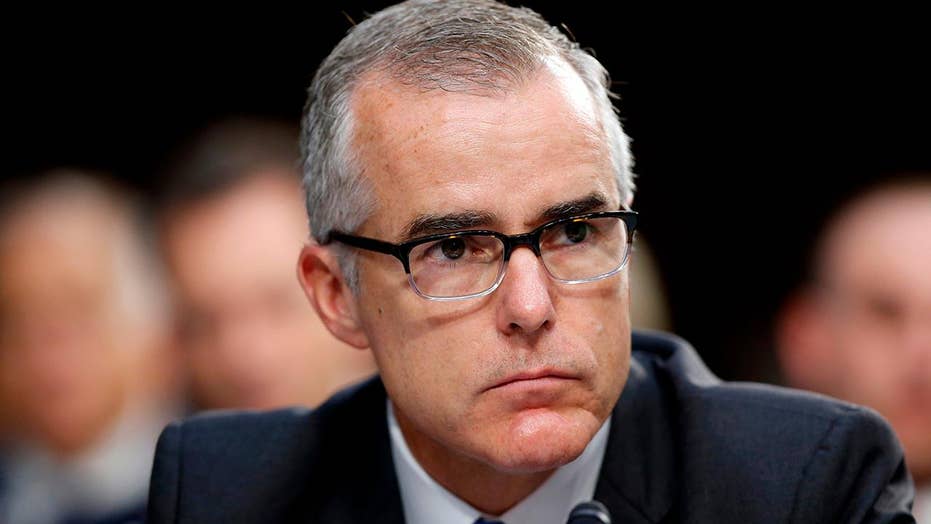 Former acting FBI director Andrew McCabe claimed he “made the decision” to remove Peter Strzok from Special Counsel Robert Mueller’s team in the summer of 2017 after a series of anti-Trump text messages surfaced between the former FBI special agent and another official with whom he was romantically involved.

It was long thought that Mueller had Strzok removed after the texts between him and Lisa Page were uncovered. But McCabe's apparent role was revealed in a newly released transcript from his House Judiciary Committee interview on Dec. 21, 2017.

Asked if he was directly involved in the firing of Strzok, McCabe replied: “Yes.”

Former acting FBI Director Andrew McCabe said he was the one who made the decision to remove Peter Strzok from the special counsel's office, following the revelations of anti-Trump text messages he sent. (AP)

“They said they had a very important matter for me to review and they needed me to come across the street and talk to them that day, which was unusual,” McCabe explained. “I made the decision to remove him from the investigation that evening.”

McCabe explained that after meeting with Horowitz, he “met with a very small group” of his “fellow leaders.”

“We discussed Peter’s reassignment, and we discussed where we would place him,” McCabe said.

“What I knew at that point was that the inspector general was investigating Mr. Strzok and Ms. Page for potential political bias,” McCabe said. “And simply the existence of that investigation I felt was –could place in jeopardy the work of the special counsel’s team, and I did not—I could not possibly take that risk.”

Horowitz uncovered a series of anti-Trump text messages between Strzok and former FBI counsel Page. Both were assigned to work on the special counsel’s team in 2017 to investigate Russian meddling and potential collusion with Trump campaign associates in the 2016 presidential election.

Page served on Mueller’s team on a short detail, returning to the FBI’s Office of General Counsel in July 2017. Strzok, though, was removed from the team and was reassigned to the FBI’s Human Resources Division. Prior to serving in the special counsel’s office, Strzok was a top agent in the bureau’s counterintelligence division.

Strzok is the FBI agent who, in July 2016, opened the FBI’s initial Russia investigation, which was nicknamed “Crossfire Hurricane” inside the bureau.

Page resigned from the bureau in May of 2018, and Strzok was eventually fired in August 2018.

Horowitz, who at the time was investigating the bureau’s handling of the investigation into Hillary Clinton’s use of a private email server while secretary of state, found that some bureau officials “appeared to mix political opinion with discussions about the MYE investigation.” MYE refers to Midyear Exam, which was the FBI’s code word for the Clinton probe.

Both Strzok and Page were on the MYE investigation as well. But Horowitz found no evidence that the political bias found impacted prosecutorial decisions.

At this point, Horowitz is investigating whether Strzok’s anti-Trump bias factored into the launch of the bureau’s Russia investigation in July 2016, among other aspects of the Russia probe.

During her interview with the House Judiciary Committee -- the transcript of which was previously released -- Page revealed that the FBI “knew so little” about whether Trump-Russia allegations were “true or not true” upon launching the probe. Page later said all they needed was an allegation and claimed it was “entirely common, particularly in a counterintelligence investigation, that you would only have—you would have a small amount of evidence” in launching a probe.

Meanwhile, McCabe, who served as FBI deputy director and then FBI acting director, was fired by former Attorney General Jeff Sessions in March 2018. The FBI’s Office of Professional Responsibility determined that McCabe “had made an unauthorized disclosure to the news media and lacked candor—including under oath—on multiple occasions.”

McCabe's testimony transcript was among several released by House Judiciary Committee Ranking Member Doug Collins, R-Ga. The transcripts pertained to numerous interviews with FBI and Justice Department officials as part of the committee's investigation during the last Congress into the handling of investigations.