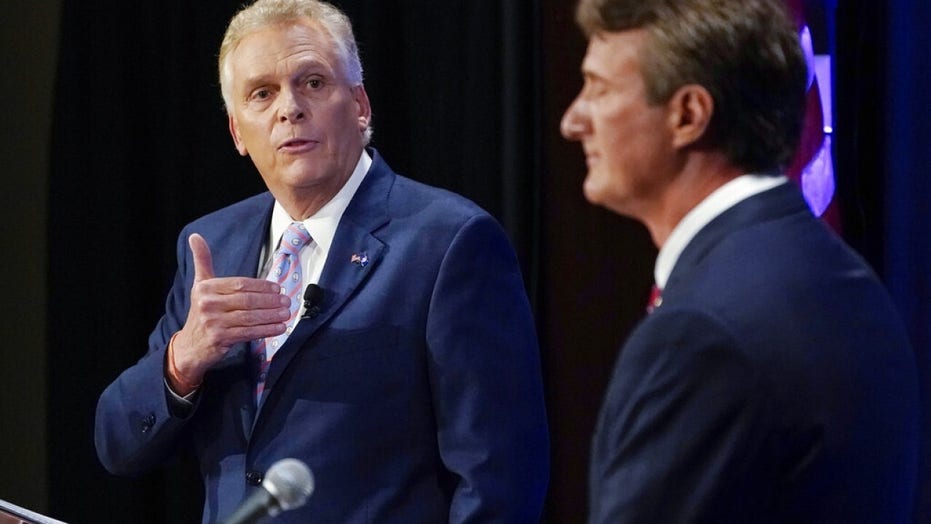 "Glenn Youngkin got caught on tape saying when he is governor he will go on the offense to defund Planned Parenthood and ban abortions," McAuliffe declared Thursday at a campaign event with Vice President Kamala Harris. "He wants to bring the Texas-style laws here to the Commonwealth of Virginia."

BIDEN TO CAMPAIGN WITH TERRY MCAULIFFE IN TOSS-UP VIRGINIA ELECTION

"Every woman, listen to me, you have got to get out and vote, because if Glenn Youngkin is elected, abortions will cease!" McAuliffe argued. "And as I was before, I will be a brick wall to protect women's rights here in the Commonwealth of Virginia."

Youngkin has not taken these stances on abortion, however.

In the first debate with McAuliffe back in September, Youngkin said he would not sign the Texas abortion bill.

"I would not sign the Texas bill today," Youngkin said. "As I've said through this entire campaign, I'm pro-life. I believe in exceptions in the case of rape and incest and when the life of the mother is in jeopardy. But the Texas bill also is unworkable and confusing. … What I have said is that I do believe that a pain threshold bill legislation would be appropriate."

Youngkin's campaign has opposed taxpayer funding for abortion and opposed Virginia Gov. Ralph Northam's comments about not extending care to unwanted babies who survive abortion. He has suggested he would sign a bill banning most abortions after 20 weeks gestation, when a baby can feel pain but he has not taken the kind of strong stances that McAuliffe suggested.

In July, a liberal activist released undercover video of the Republican candidate, aiming to expose him as a pro-life radical.

At a June meeting in Loudoun County, a questioner asked Youngkin whether he would defund Planned Parenthood or "take it to the abortionists."

Youngkin replied, "I’m going to be really honest with you. The short answer is, in this campaign I can’t. When I’m governor and I have a majority in the House we can start going on offense. But as a campaign topic, sadly, that in fact won’t win my independent votes that I have to get."

President Biden is seen with Terry McAuliffe, a former chairman of the Democratic National Committee who is seeking a return to the Virginia governor's office, which he held 2014-2018. (Reuters)

This fell far short of a pledge to defund Planned Parenthood or outlaw abortion, yet McAuliffe has repeatedly claimed that it was exactly that.

In September, The Washington Post's fact-checker gave McAuliffe "Two Pinocchios" for his claims that Youngkin would ban abortions.

"McAuliffe is twisting Youngkin’s secretly recorded comments into something Youngkin did not say — and it’s especially a stretch to claim he has repeatedly said he would ban abortion in Virginia," the Post's Glenn Kessler wrote.