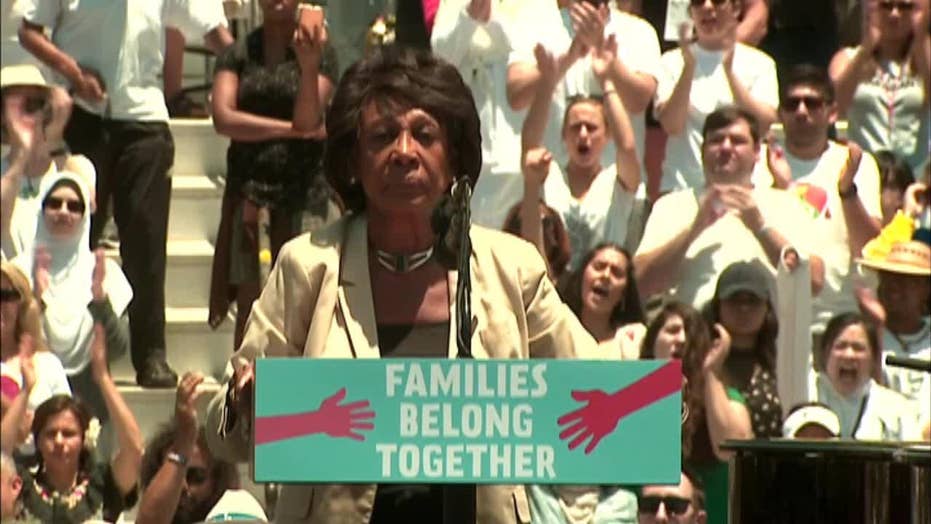 During a speech Saturday at an immigration rally in California, U.S. Rep. Maxine Waters reacted defiantly to alleged threats reportedly directed at her following her previous remarks about the Trump administration’s “zero tolerance” immigration policy.

Waters took the podium at the Families Belong Together rally in downtown Los Angeles, one of the many rallies staged across the country urging for the reunification of families who were separated at the U.S.-Mexico border.

She told the crowd that she has “no fear” and is “in this fight” after saying some congressional lawmakers felt “intimidated.”

Waters went on to say that she was willing “to make whatever sacrifices” were necessary, adding: “I am not about to let this country go by the way of Donald Trump.”

Her remarks came after she encouraged her supporters earlier this month to fight back against the White House amid a controversial immigration policy that ultimately led to the separation of migrant children from their parents after crossing the border.

Those earlier remarks prompted a reaction from President Donald Trump, in a Twitter message Wednesday:

"Congratulations to Maxine Waters, whose crazy rants have made her, together with Nancy Pelosi, the unhinged FACE of the Democrat Party," the president wrote. "Together, they will Make America Weak Again! But have no fear, America is now stronger than ever before, and I’m not going anywhere!"

Waters was also featured prominently in a campaign ad posted online by the Republican National Committee that criticized the political left as being "unhinged."

Speaking previously on MSNBC, Waters said that current administration officials who defend Trump “know what they’re doing is wrong,” and said they soon won’t be able to peacefully appear in public without being harassed.

She made similar comments at a Los Angeles rally, telling supporters that she wanted “history to record that we stood up that we pushed back that we fought that we did not consider ourselves victims of this president.”

Following the remarks, Waters had to call off scheduled appearances in Texas and Alabama after various threats were allegedly made at her, according to the Los Angeles Times. Waters reportedly told radio station KPFK-FM on Saturday that organizers of the events “didn’t have all of our security in order and organized for those two trips, but we’ve got it together now.”