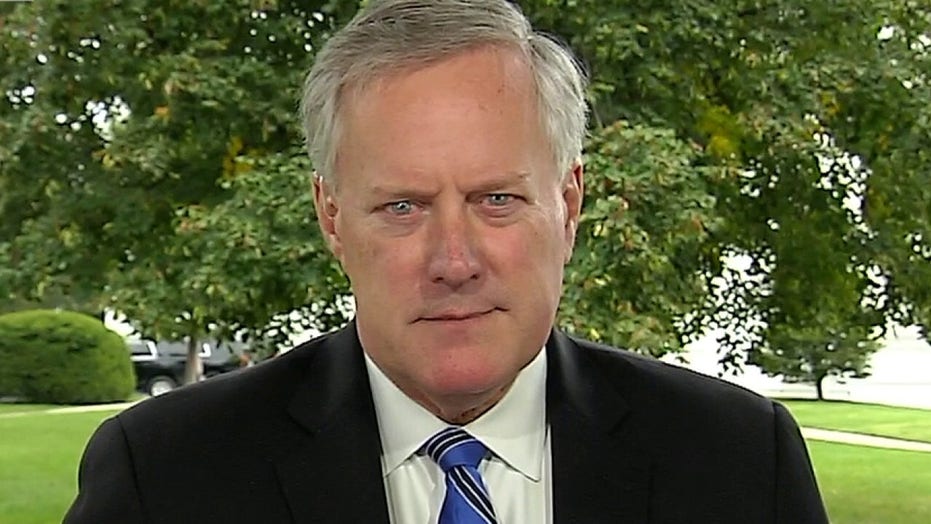 Mark Meadows on what Trump is seeking in SCOTUS nominee

White House chief of staff Mark Meadows says the president is looking for a justice who will 'uphold the Constitution' and 'doesn't legislate from the bench.'

White House chief of staff Mark Meadows joined Fox News’ "Outnumbered Overtime" Thursday to discuss what President Trump is looking for in his pick for the Supreme Court.

Meadows said the president wants a justice who will uphold the rule of law rather than having a part in the legislative process.

“He wants to make sure we have a justice that is willing to uphold the Constitution, that doesn’t legislate from the bench, and as we start to see a Supreme Court, one that goes back to the very foundation of our country on what we envision,” Meadows said. “And that’s upholding the rule of law, not creating laws in a marble building.”

President Trump said he has not made up his mind on who to fill the seat left vacant by the death of the late Justice Ruth Bader Ginsburg. During a Thursday morning appearance on the “Brian Kilmeade Show” on Fox News Radio, he said he is considering five women for the seat and will announce his pick on Saturday at 5 p.m.

Meadows said Trump has been “vetting all five candidates” and that his administration has “been working around the clock, late into the evening to try to make sure that the best nominee possible is put forth.”

SUPREME COURT CONFIRMATION WILL BE ‘THE SUPER BOWL OF POLITICS’: SEN. GRAHAM

Democrats have accused Republicans of hypocrisy for nominating a Supreme Court justice so close to the November election, pointing to their refusal to even hold hearings in 2016 on then-President Obama’s Supreme Court nominee Merrick Garland. Republicans have countered that circumstances now are different because the GOP Senate majority was elected in 2014 to counterbalance Obama and in 2018 to support Trump.

Asked to comment on the allegation, Meadows said Democrats have apparently made up their minds that they will vote “no” regardless of who Trump nominates.

“Maybe you can applaud them for being transparent and the fact that they’re going to be partisan and not judge this nominee based on the merits of her particular resume. And so, if it’s going to be a partisan event, I applaud them in saying that they’re not going to meet, go ahead and cast the no vote,” Meadows said. “But maybe, perhaps, let’s move it a little bit faster. If they already have their mind made up, let’s go ahead and make sure we get somebody confirmed.”