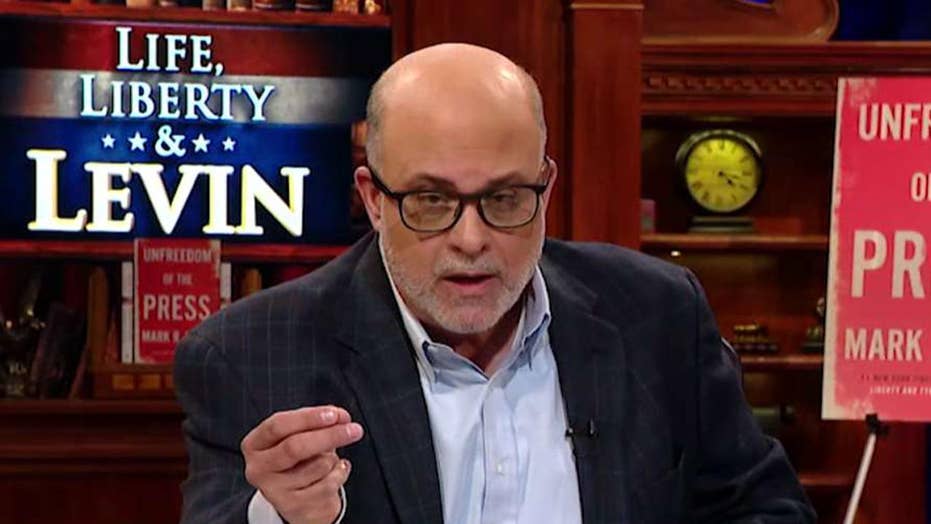 Mark Levin on the 'greatest scandal in American history'

The Mueller report is a 400-page, $35 million op-ed that amounts to an “impeachment report” for the liberal media and House Democrats, argued Mark Levin on his Sunday program, “Life, Liberty & Levin." '

The Special Counsel Robert Mueller’s nearly two-year investigation into Russian meddling in the 2016 presidential election found “no collusion” between President Trump and Russia. The Department of Justice released a redacted version of the report in two volumes on Thursday.

Levin called the result a "pathetic joke of a report" that established nothing the general public didn't already know and its findings didn't warrant a "special investigation."

“There’s no collusion, says the Special Counsel. That takes one sentence. It doesn’t take 200 damn pages. It doesn’t take $35 million dollars,” Levin said, referring to Vol. 2 of the report.

Despite the Democrats warning of a "Saturday Night Massacre" like President Nixon during Watergate, President Trump never asserted executive privilege to prevent documents or people around him from talking to Mueller. He was an open book," Levin argued.

But after the report found no evidence of collusion, the Democrats, who had been discussing impeachment since the day after Trump was elected, pivoted to pinning obstruction of justice charges on the president, Levin said.

"This is an abuse of power by a prosecutor. This is the only prosecutor in the entire country who writes a report under justice department regulations, a report that is only supposed to go to the Attorney General, who then makes decisions about whether to release any of it. Or all of it, because there’s no requirement for this to be released at all," Levin said.

The Mueller report is, essentially, Levin argued, "an impeachment report" that was written for the "media and the "Democrats in the House of Representatives."

Levin said the investigation "runs completely contrary to a civilized society" and a "constitutional system," yet there is not a single Democrat member of the House of Representatives or "so-called news person" at any major outlet that appears to be concerned.