Reaction and analysis to tensions with Iran from Fox News contributor Marc Thiessen on 'The Story.'

While many on the left are blaming President Trump for the escalating tension between the U.S. and Iran, Marc Thiessen believes the president is deescalating the situation.

Thiessen made the assessment during an appearance on "The Story" on Thursday night and added he was "appalled" over the accusations that president was responsible for the situation.

"I think the president is deescalating it if you look at what he said. He said that it could have been a mistake and could have been somebody who was not coming from the top. And so he's taking a very, very measured approach to this," Thiessen said.

Iran blasted a Navy high-altitude drone out of the sky over the Strait of Hormuz, with U.S. Central Command leaders on Thursday slamming the "unprovoked" strike and Tehran's subsequent "false" justifications for it. 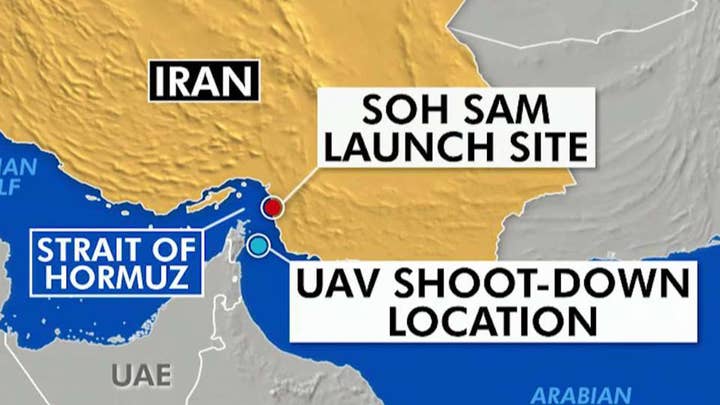 Thiessen blasted Trump's critics for blaming Trump for the actions of Iran.

"But what I'm really appalled by quite frankly Sandra is all the people in Washington who are spending so much time trying to blame Donald Trump for this escalation of tensions," Thiessen said.

Thiessen also went after Democratic presidential frontrunner Joe Biden who he said should "look into a mirror," saying the Obama administration's nuclear deal with Iran is responsible for Iran's actions.

"You had Joe Biden go out today and say that this is a completely self-inflicted wound. I mean Donald Trump didn't put a mine on a on a Japanese oil tanker. Donald Trump didn't shoot down a U.S. drone. Iran did those things. And the fact is the reason why Donald Trump has had to impose these sanctions is because of the Obama administration's nuclear deal."

The former speechwriter for President George W. Bush lauded Trump's dealing s with Iran over the past two years.

"They have never been more irresponsible and they had been in the last two years until Trump came in and cut off their funding," Thiessen said.