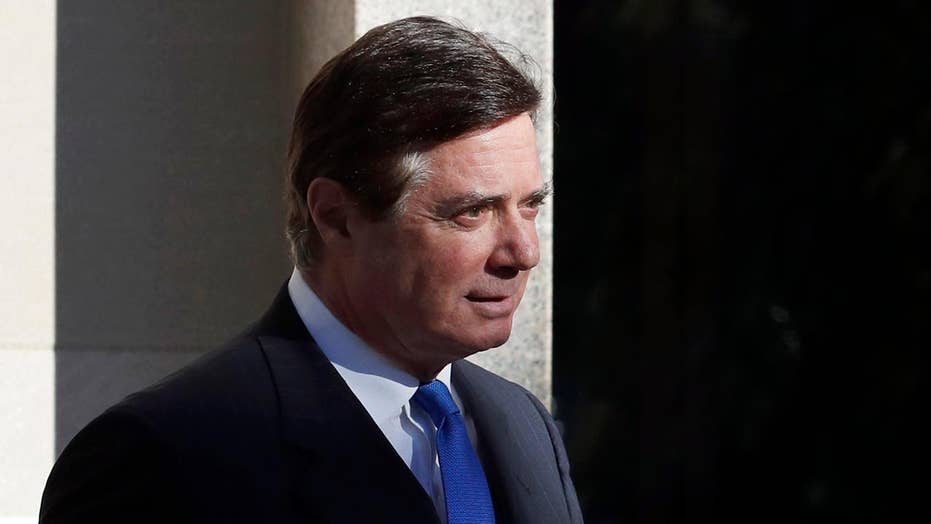 Manafort pleads not guilty to 12 counts of financial crimes

The indictment alleged that while lobbying for Ukrainian interests from 2006-2015, Manafort laundered $75 million through offshore companies and bank accounts; James Rosen goes in-depth for 'Special Report.'

Legal experts greeted the indictment of former Trump campaign chairman Paul Manafort and a business associate with studied interest, saying that it was far too early to predict the final outcome of special counsel Robert Mueller's investigation into alleged ties between the Trump campaign and Russian officials.

"It doesn't reflect well, but it doesn't impugn the [Trump] campaign, either," said Scott Greenfield, a New York-based criminal defense attorney who told Fox News his reaction to the indictment was "a huge yawn."

"For anyone who thought Mueller's opening salvo would bring down Trump, the indictment is a huge disappointment," Greenfield added.

Manafort and Rick Gates face 12 felony counts, including money laundering, conspiracy and acting as unregistered foreign agents. According to the indictment, which was unsealed Monday, the pair engaged in covert lobbying work for pro-Russian interests in Ukraine.

Andrew McCarthy, a former Assistant U.S. Attorney best known for prosecuting the 1993 World Trade Center bombing case, wrote on National Review Online Monday that the indictment was "much ado about nothing ... except as a vehicle to squeeze Manafort." In an addendum to his original article published Wednesday, McCarthy noted that the indictment does not accuse Manafort or Gates of tax law felonies or fraud.

"These omissions do not make sense to me. Again, my operating theory is that Mueller is trying to squeeze Manafort into becoming a cooperating witness," McCarthy wrote, later adding, "Assuming that is the goal, I think Mueller’s team could have improved the indictment’s credibility by toning down what is included and adding in what appears to have been left out."

However, Ken White, a Los Angeles-based defense lawyer who is also a former Assistant U.S Attorney, suggested that the indictment "would represent a failure" to convince Manafort to turn state's witness.

"I suspect they tried to flip him and [Manafort and Gates] wouldn't," said White, who characterized the indictments as "fairly typical."

On his Popehat blog, White described the allegations in the indictments as "[Manafort and Gates] acted as foreign agents, didn't register as they were required to, lied about it when asked, and brought the proceeds into the country to hide the proceeds, hide the agent activity, and evade taxes.

"This is Serious Business, no consolation-prize indictment," White added.

Greenfield said the guilty plea by another former Trump campaign adviser, George Papadopoulos, is "by far more significant" to the progress of the Mueller investigation than the Manafort indictment.

"I thought the handling of [Papadopoulos by Mueller] was tactically brilliant," Greenfield said. "There was a sigh of relief from the White House [after the Manafort indictment.] They thought they had a win for the day, and then they announced the guilty plea to say, 'Hey, this guy's talking about you.'"

However, Greenfield went on, "we don't know that Papadopoulos ... will be significant. I think it's fair to say we don't know anything about anything."