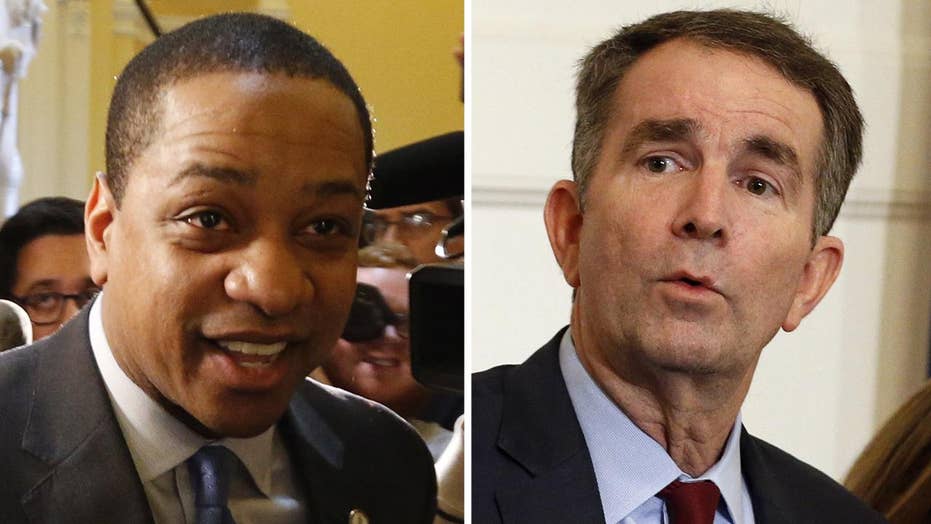 Virginia Democratic Lt. Gov. Justin Fairfax on Monday, when asked by a reporter, did not rule out the possibility that embattled Democratic Gov. Ralph Northam could be secretly pushing a newly revealed sexual assault allegation against Fairfax to derail his possible ascension to the governorship.

And in a separate, fiery statement late Sunday, Fairfax accused The Washington Post of "smearing an elected official," reiterated that the sexual assault allegation against him is "false," and seemingly threatened to sue the paper for rebuking his earlier characterization of the evidence surrounding the episode.

"This is what we meant when we said that people who continue to spread these false allegations will be sued," Fairfax said.

Fairfax's extraordinary comments came as Northam faces a torrent of pressure from both Democrats and Republicans to resign, after a now-infamous yearbook photo surfaced showing someone in blackface and someone in a KKK costume on Northam's 1984 medical school yearbook page.

In a post published on the right-wing website Big League Politics on Sunday night, a woman accused a politician fitting Fairfax's description of sexually assaulting her in a hotel room during the Democratic National Convention in Boston in 2004. In a statement Monday, Fairfax denied assaulting anyone, but acknowledged having a consensual encounter with the woman.

The Collective Political Action Committee (PAC), which says on its website that it "working to fix the challenge of African American underrepresentation in elected seats of power throughout our nation," issued a statement on Monday charging it had "learned through various sources that Governor Northam's team and advisors have now decided to start attacking Lt. Governor Justin Fairfax by spreading lies to reporters and state leaders in an attempt to quell support for the Lt. Governor as Governor Northam's impending successor should he resign."

Asked about the statement by the political action committee, which has supported Fairfax in the past, Fairfax did not dispute that Northam's team could be responsible.

"Collective PAC has made its statement -- you know, I don't know precisely where this is coming from, you know, we've heard different things," Fairfax said. "But here's the thing: Does anybody think it's any coincidence that on the eve of my potentially being elevated, that that's when this uncorroborated smear comes out - does anybody believe that's a coincidence? I don't think anybody believes that's a coincidence."

But on Monday, The Washington Post pushed back against Fairfax’s claim that the newspaper found serious problems with the original sexual misconduct accusation when it initially opted not to publish the account.

The Post said Monday that it was approached by the woman in 2017 and carefully investigated.

“The Post did not find ‘significant red flags and inconsistencies within the allegations,’ as the Fairfax statement incorrectly said,” the Washington Post said in a story published Monday, sharply disputing a separate statement by the lieutenant governor.

Fairfax had said that the accuser, a woman, “first approached the Washington Post” over a year ago, prior to Fairfax’s inauguration in 2018.

“The Post carefully investigated the claim for several months,” Fairfax’s office said in the statement. “After being presented with facts consistent with the Lt. Governor’s denial of the allegation, the absence of any evidence corroborating the allegation, and significant red flags and inconsistencies within the allegation, the Post made the considered decision not to publish the story.”

In its Monday story, the Washington Post acknowledged investigating the claims and deciding not to publish. But it said the Fairfax statement “incorrectly” claimed the paper found “significant red flags and inconsistencies within the allegations.”

“Fairfax and the woman told different versions of what happened in the hotel room with no one else present,” the paper said. “The Washington Post could not find anyone who could corroborate either version.”

Virginia Gov. Ralph Northam, left, gestures as his wife, Pam, listens during a news conference in the Governors Mansion at the Capitol in Richmond, Va., Saturday, Feb. 2, 2019. Northam is under fire for a racial photo the appeared in his college yearbook. (AP Photo/Steve Helber)

The Washington Post didn’t name the accuser. But the paper said Fairfax and the woman first met in Boston at the 2004 Democratic National Convention.

“The woman described a sexual encounter that began with consensual kissing and ended with a forced act that left her crying and shaken,” The Washington Post reported. “She said Fairfax guided her to the bed, where they continued kissing, and then at one point she realized she could not move her neck. She said Fairfax used his strength to force her to perform oral sex.”

The statement from Fairfax said that before Big League Politics posted about it, “not one other reputable media outlet has seen fit to air this false claim. Only now, at a time of intense media attention surrounding Virginia politics, has this false claim been raised again.”

The Big League Politics post that prompted Fairfax's denial published a purported Facebook post from the woman that read, “Imagine you were sexually assaulted during the DNC Convention in Boston in 2004 by a campaign staffer. You spend the next 13 years trying to forget it ever happened. Until one day you find out he’s the Democratic candidate for statewide office in a state some 3000 miles away, and he wins that election in November 2017. Then, by strange, horrible luck, it seems increasingly likely that he’ll get a VERY BIG promotion.”

She did not name Fairfax, but the report implied she was referring to the lieutenant governor.

Meanwhile, Democratic Virginia Sen. Mark Warner took a circuitous route on Capitol Hill to avoid reporters late Monday, before heading to a car which pulled up underneath the Senate Carriage Entrance.

Warner, in response to questions from Fox News, repeatedly referred back to his joint statement with fellow Virginia Demoratic Sen. Tim Kaine on Northam, which was issued Saturday.

When asked about Northam not heeding his calls to resign, Warner responded, "We have to find a way to move forward.”

Should Northam resign, Fairfax would have the unusual opportunity in 2021 to seek another term as governor since he was not elected in the first place. Under Virginia law, governors can serve more than one term, but not consecutively.

Late Monday, the Virginia Legislative Black Caucus said it was monitoring the situation.

“The Virginia Legislative Black Caucus takes all allegations of sexual assault or misconduct with the utmost seriousness," its members said in a statement. "Given the recent allegations regarding Lieutenant Governor Justin Fairfax, the VLBC will continue to assess this developing situation as more details become available.”