Loeffler: Warnock and the left-wing media want to drive the country to socialism

EXCLUSIVE: Sen. Kelly Loeffler, R-Ga., on Monday described reports of alleged abuse at a camp overseen by Democratic candidate Rev. Raphael Warnock as "disqualifying" -- after one of the victims described counselors allegedly throwing urine on him and locking him outside overnight.

"It's disgusting," Loeffler said in an interview with Fox News. "It's really alarming, and frankly it should be disqualifying."

Loeffler was reacting to a Washington Free Beacon report, in which 30-year-old Anthony Washington described the abuse he allegedly suffered as a 12-year-old at Camp Farthest Out -- a camp for inner-city children that Warnock oversaw in his role as the senior pastor of the Douglas Memorial Community Church in Maryland.

Washington told the outlet that a counselor forced him to spend the night sleeping outside in the cold by himself as a punishment for wetting the bed, and that counselors threw urine at him they used when there wasn’t a bathroom.

"I went through that experience myself. I don’t even like talking about this s---t. That s---t happened. … It was like in a bucket. They would keep that s---t in a bucket," he said.

Washington said he saw counselors "grab kids," but didn’t know the extent of abuse at the camp, or if others had similar experiences.

LOEFFLER, PERDUE BACK LENIENCE FOR US TEEN JAILED IN CAYMAN ISLANDS FOR BREACHING COVID REGS

Charges against him were later dropped, at a prosecutor's request, who blamed "miscommunication."

Loeffler has brought up the matter at debates and elsewhere, accusing Warnock of refusing to answer questions about it.

"I asked a question directly about the nature of the abuse, what was his knowledge of it," Loeffler told Fox News on Monday. "Raphael Warnock refused to answer questions about being arrested for obstructing that investigation into child abuse at his camp and that camp was later shut down and obviously there were issues." 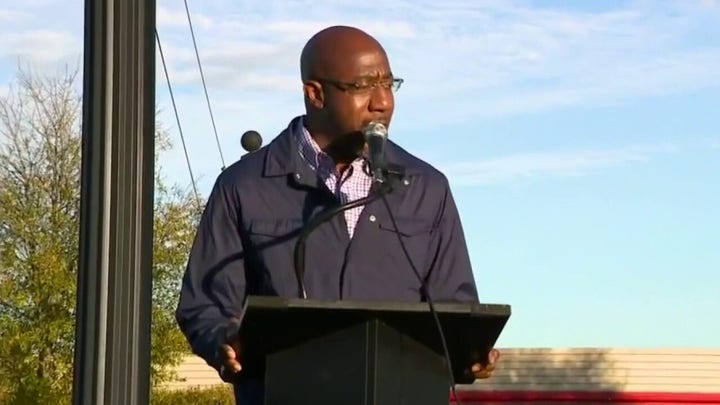 "He needs to answer to Georgians, he needs to know what the nature of the abuse was and now we've heard that from one of the victims today and it’s disgusting and very, very concerning," she said.

Warnock’s campaign did not respond to a request for comment from Fox News, but Warnock has previously accused Loeffler of lying about the controversy.

Warnock said he was "working at trying to make sure that young people who were being questioned by law enforcement had the benefit of counsel, a lawyer or a parent...The law enforcement officers actually later thanked me for my cooperation and for helping them."

"This is yet another one of Senator Loeffler’s lowest of the low attacks that independent fact checkers have said is 'mostly false,'  Michael Brewer, the Warnock campaign's rapid response director, told Fox News earlier this month.

"The truth is he was protecting the rights of young people to make sure they had a lawyer or a parent when being questioned. Law enforcement officials later praised him for his help in this investigation," he said.

The two are locked in a tight race for the Jan. 5 runoff which, along with a separate Senate runoff between Sen. David Perdue and Democrat Jon Ossoff, will determine which party controls the Senate next year. Early voting is now open in the state.

"In his own words, he's called police officers gangsters and thugs, he's said that you cant serve God and the military and yet he’s refused -- while condemning the military and police -- he’s refused to answer questions about his support of Marxism, child abuse investigations, domestic abuse allegations," she said. "Georgians want answers, of course they are concerned."