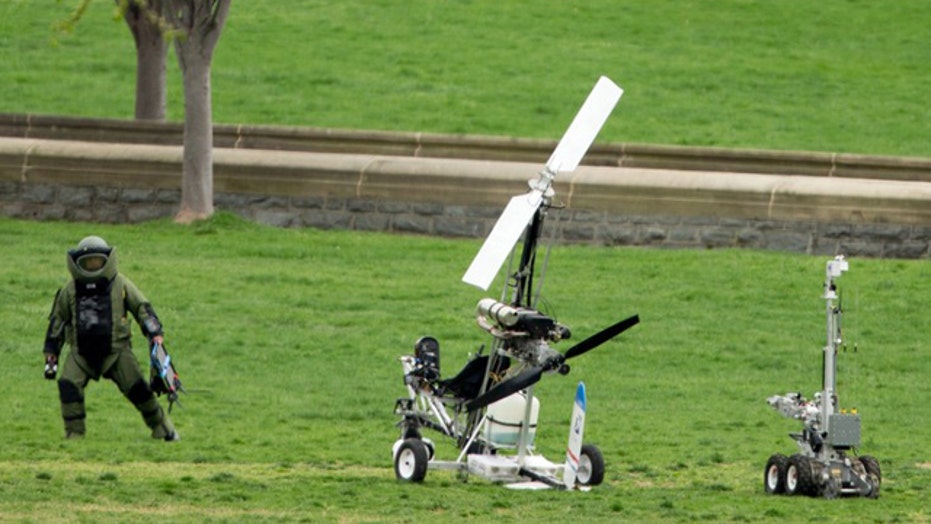 Why Doug Hughes says everyone is focusing on the wrong thing

No, this isn't eccentric, Florida mailman Doug Hughes, winging a squadron of gyrocopters toward America's seat of government -- armed with a payload of 535 protest letters. Instead, some 50, vintage, World War II bombers and fighters will pierce Washington's restricted airspace on May 8. The planes will fly by the Capitol, marking 70 years since the U.S. completed the conflict in Europe.

Federal authorities granted special dispensation to buzz the Capitol and National Mall at around 1,000 feet. Hughes guided his gyrocopter at an altitude of merely 300 feet before plopping down on the West Front of the Capitol. Organizers of the World War II flyover fretted that Hughes's publicity stunt might make officials think twice about the V-E Day event. But so far, the older craft are cleared for takeoff.

With advance warning, people will know what to expect as the flights honor those who fought, flew and sailed for the U.S. during World War II. But the sorties will serve as an unintentional reminder about vulnerabilities facing the United States Capitol via air -- underscored by Hughes' erratic adventure last week.

U.S. Capitol Police Chief Kim Dine -- on the ropes much like Clancy after a litany of episodes forced congressional officials to question his leadership -- was also on hand to brief lawmakers. But Chaffetz wanted to hear from the Federal Aviation Administration (FAA), the U.S. Park Service and NORAD. NORAD is the North American Aerospace Command. It's charged with detecting potential threats to U.S. airspace (though best known for tracking the flight of Santa Claus on Christmas Eve).

Representatives from those organizations failed to materialize for the briefing, aggravating Chaffetz.

"Speaks volumes," Chaffetz huffed. "But they didn't seem to show up at the event of the gyrocopter, either."

Translation: Each Christmas, NORAD bird-dogs a fictitious, elf in a red suit -- ferried around the globe by gravity-defying reindeer -- yet doesn't raise a finger when it comes to an actual bogey which lands just a few yards off the Speaker's Balcony at the Capitol

Chaffetz wants to know how Hughes flew for a half-hour, at low-speed, in the most-restricted airspace in North America -- yet no one did a thing. That's why he's conducting a hearing on the incursion next Wednesday.

The Utah Republican suggested that officials need to harden their defense posture around the Capitol against possible threats from above. And to be clear, NORAD and the FAA saw Hughes. In the end, they decided against taking any action.

"I want them to be taken down and taken down hard," said Chaffetz of potential airborne attackers.

"This is an extremely urgent situation," said Rep. Elijah Cummings, D-Md., the top Democrat on the oversight panel. "Lives depend upon it."

They don't have a lot of time to get this right. Come September, Pope Francis will visit the Capitol to speak to a Joint Meeting of Congress. Security precautions around the Capitol complex could be at a record-high.

"The Papal visit will be significant in planning and scope. Almost similar, literally, to an inauguration. Perhaps it will even surpass that," said Dine when testifying over the winter before the Senate Legislative Branch Appropriations Subcommittee. "We anticipate very, very large crowds each day. People coming to the Capitol, lining the streets. It's a huge and very significant event."

Senate Sergeant at Arms Frank Larkin, a former Secret Service agent, concurred with Dine during his testimony to lawmakers.

"I've been involved in a number of Papal events and have protected a number of popes and it is unlike any other. The closest comparison would be an inaugural," said Larkin. "But this would go over and above an inaugural."

Larkin said he expected "a mass of humanity" at the Capitol for the Pope.

Pope John Paul II visited the Capitol in 1979 but did not speak to a Joint Meeting of Congress as Francis is scheduled to do. It's also unclear if the Pope will celebrate Mass on the National Mall (John Paul did in '79). There's speculation Pope Francis could do a "wave" or perhaps materialize on the aforementioned Speaker's Balcony -- much like the window in the Papal Apartments above St. Peter's Square -- and offer a blessing to the throng below.

"There's no reason to do anything less than everything that is necessary to make sure that everybody including the Pope is safe," said Sen. Brian Schatz, D-Hawaii, the top Democrat on the Senate Legislative Branch spending panel.

Of course, officials regularly handle major events weekly at the Capitol. Israeli Prime Minister Benjamin Netanyahu spoke to a Joint Meeting of Congress recently. Japanese leader Shinzo Abe is scheduled to do the same next Wednesday -- the same day as Chaffetz's inquest on the gyrocopter fiasco. Major leaders, Cabinet officials and celebrities drop by the Capitol complex constantly. In fact, it's routine and goes off like clockwork without so much as a hiccup. That's to say nothing of the general, daily protection of 535 members of Congress and tens of thousands of congressional staff.

But the Papal visit is different. Security officials will have all systems at high-alert for that event.

The World War II flights over Washington in early May hearken back to America's efforts in the air in Europe seven decades ago. London faced 71 separate attacks from the German Luftwaffe during The Blitz. Those American planes on display engaged the Germans, in Europe, not here in the States. The fear since 9/11 is that the U.S. is vulnerable on its own soil. Doug Hughes' quixotic flight pierced many illusions that things are safer after 9/11 at the Capitol. Security officials face a major test in September with the Pope. But the bigger test is just keeping the Capitol safe from incidents on a daily basis.