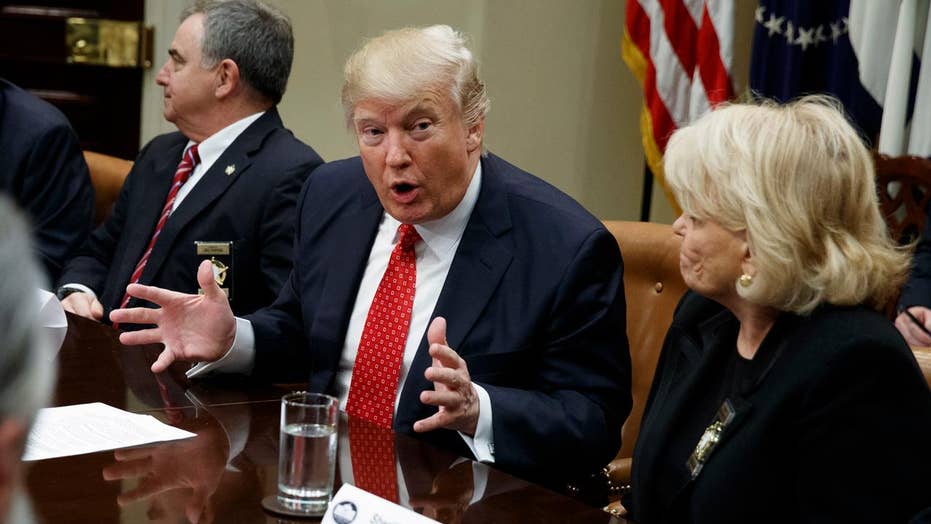 The White House has riled the country's civil libertarian wing after President Trump enthusiastically voiced support for a controversial law enforcement tool that allows an individual’s property or assets to be seized without a guilty verdict.

The president weighed in on what's known as "civil asset forfeiture" during an Oval Office meeting last week with sheriffs. The president, who ran on a law-and-order message, said he shared their desire to strengthen the practice and even said he would “destroy” the career of a Texas politician trying to end it.

The comments revived tensions with libertarians who have been fighting the practice under both Democratic and Republican administrations. Already piqued by the selection of former Alabama Sen. Jeff Sessions, a vocal supporter of asset forfeiture, to lead the Justice Department, the Libertarian Party itself condemned the comments.

“It was really disappointing to hear those words. He campaigned on the idea of helping people who are on the low end of the economic spectrum and this [law] disproportionately affects minorities and those who do not have the means to hire an attorney,” Libertarian National Committee Chair Nicholas Sarwark told Fox News.

Sarwark called the practice "immoral," adding that it is simply “government theft of individual property that flips the nation’s legal system on its head.”

While laws differ across the country, most states allow law enforcement to seize an individual’s assets or property on the suspicion they have been involved in criminal activity. Even if a person is found to be not guilty, some jurisdictions allow the government to keep their property.

Sheriff John Aubrey of Louisville, Ky., said he was heartened by his meeting with Trump because he, unlike the last administration, will give them a "fair hearing" on asset forfeiture.

He also believes there is a misconception that police just take property but stressed that they cannot do so before getting a court order.

Trump signaled he would fight reform efforts in Congress, saying politicians could “get beat up really badly by the voters” if they pursue laws to limit police authority.

The comments could signal an abrupt halt to efforts to curb the practice under the Obama administration, which also had faced heavy criticism from civil libertarians and criminal justice reform advocates.

Brittany Hunter of the free-market Foundation for Economic Education wrote that the president’s “egregious comments” effectively destroy “any hope that his administration will be better on this issue than President Obama. In fact, the situation may very well become worse.”

According to the Institute for Justice, a civil liberties law firm, the Department of Justice’s Assets Forfeiture Fund generated $93.7 million in revenue in 1986. By 2014, the annual figure had reached $4.5 billion -- a 4,667 percent increase. The practice surged for years under the Obama administration.

While critics believe the policy creates a profit incentive for law enforcement, police organizations say it is an important tool and charges of abuse have been blown out of proportion.

“There are those who see an incident of one and want to apply the rule of many, but we have found the annual number of incidents [of abuse] is miniscule,” Jonathan Thompson of the National Sheriffs Association told Fox News.

Thompson said the issue was addressed in a conversation with Sessions, who views it as a priority, and he believes the Trump administration will be more supportive than the Obama administration in lifting “the burden on local law enforcement.”

He added that law enforcement are not opposed to reforms and that he plans to keep his focus on increasing independent judicial review and transparency.

Candidates running on the Libertarian ticket in the midterm elections are likely to make Trump’s record on criminal justice reform and the Sessions selection an issue, in a bid to peel off voters from across the political spectrum.

“Our candidates will make [asset forfeiture] an issue for Republicans and Democrats on the state and federal level in 2018. We will make them answer to voters on these issues,” Sarwark warned.

Many of the states key to Trump’s victory have passed reforms.

Largely an uncontroversial issue for decades, the government’s war on drugs in the 1980s led to its rapid expansion, but media coverage of abuses has led to a public blowback.

A 2015 report by the American Civil Liberties Union (ACLU), found that of those Philadelphia residents who had their assets taken, nearly one-third were never convicted of a crime and that almost 60 percent of cash seizures were for amounts less than $250.