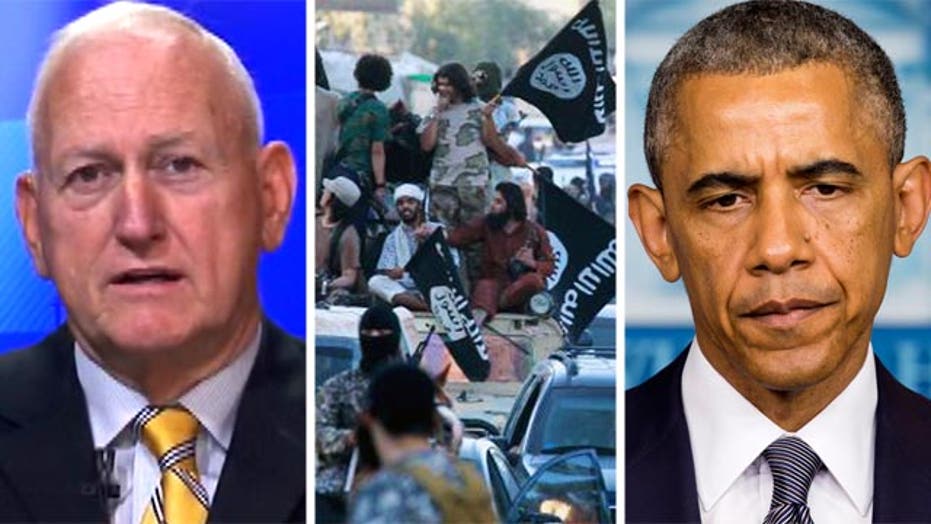 What is terror group trying to accomplish?

Congressional lawmakers urged the Obama administration to crank up the offensive against the Islamic State after another video surfaced purporting to show the graphic execution of an American journalist.

The White House and State Department said intelligence officials are working quickly to determine the video’s authenticity. If it is genuine, State Department spokeswoman Jen Psaki said, “We are sickened by this brutal act.”

But U.S. lawmakers on both sides of the aisle urged tough and swift action in response.

“Let there be no doubt, we must go after ISIS right away because the U.S. is the only one that can put together a coalition to stop this group that’s intent on barbaric cruelty,” Sen. Bill Nelson, D-Fla., said in a statement.

Nelson added that he plans on filing legislation next week that would give President Obama authority to order airstrikes against ISIS in Syria.

Sotloff had been held since last year by Islamic State militants. As before, the executioner in the video claimed the act was a message to the United States in response to airstrikes.

“I am back Obama, and I am back because of your arrogant foreign policy towards the Islamic State,” the person in the video said.

The administration, while launching another humanitarian mission in northern Iraq in recent days and sustaining a campaign of airstrikes around the Mosul Dam and elsewhere, continues to deliberate over the next steps – and whether to expand airstrikes across the border into Syria, where the Islamic State has a stronghold.

The president, drawing criticism from some GOP lawmakers, acknowledged last week that his team does not have a strategy yet for confronting ISIS in Syria.

With the president en route to Europe for meetings with allies and a NATO summit, it’s unclear whether the latest video might change, or accelerate, the administration’s planning.

Without commenting specifically on whether the U.S. military should go into Syria, House Foreign Affairs Committee Chairman Ed Royce, R-Calif., said Tuesday that the U.S. needs to be “acting urgently” to arm the Kurds in northern Iraq and target the Islamic State with drone strikes.

“Sadly, ISIS is bringing this barbarity across the region – beheading and crucifying those who don’t share their dark ideology,” he said. “The threat from this group seems to grow by the day.”

Rep. Mike Pompeo, R-Kan., a member of the House intelligence committee, also said in a statement that “we cannot afford to allow these terrorists to continue their march.”

Asked Tuesday about the terror group, Pentagon spokesman Rear Adm. John Kirby said the U.S. “absolutely” has a strategy for the Middle East and a “clear” mission in Iraq.

“We are there to support Iraqi and Kurdish forces as they take the fight to ISIL.  We are there to provide humanitarian assistance where and when we can,” he said.

Psaki said the U.S. wants to see the group “destroyed” but it won’t be “an overnight effort.”

Analysts and others, though, said some elements of the approach will have to change.

Former U.N. ambassador Bill Richardson, speaking with Fox News, called for a “kitchen sink approach” and – like in Iraq years ago – a “coalition of the willing” to increase training, military aid and airstrikes.

Michael O’Hanlon, with the Brookings Institution, said the Obama administration made the right decision to launch airstrikes in northern Iraq, but said more might be needed.

He urged the government to consider sending up to several thousand special forces and “mentor teams” into Iraq to help the Iraqi army in its fight against the Islamic State.

And he suggested the latest brutal act might spur more countries in the region to align with Baghdad and Washington.

“I think this will shake some sense into countries that wanted to have it both ways up until now,” he told Fox News.