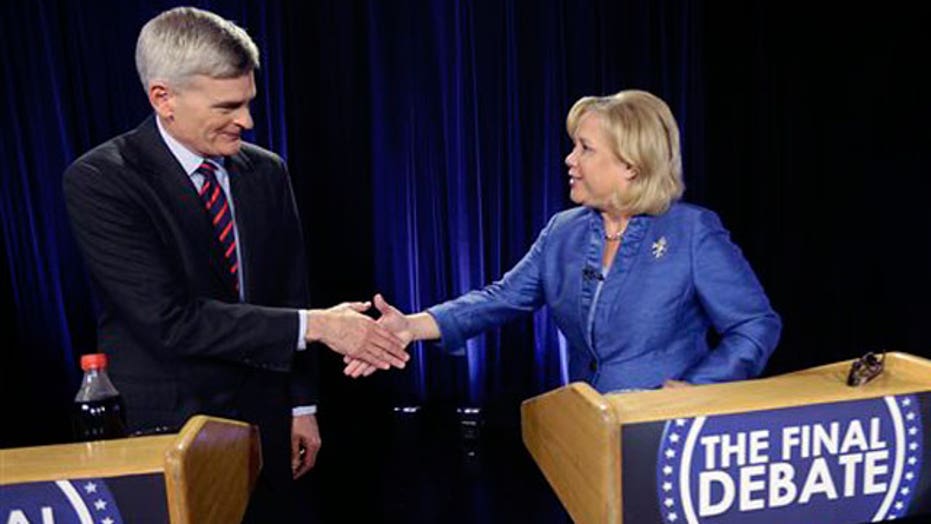 Louisiana Democratic Sen. Mary Landrieu has pulled off overtime election heroics before -- winning runoffs in 1996 and 2002. But her streak could be coming to an end this week in her runoff race with Republican challenger Rep. Bill Cassidy.

“This is definitely going to be a tough one for Senator Landrieu,” Richard Fowler, a liberal political commentator, told FoxNews.com. “But she is Louisiana’s comeback kid.”

Landrieu trails Cassidy by 15 percentage points going into Saturday’s runoff, according to an averaging of polls by the non-partisan website RealClearPolitic.com.

Though pulling off a win after trailing by double digits so late in the race is possible, most telltale signs shows Landrieu facing long odds.

Beyond her trailing Cassidy in available cash, $3.1 million to $782,000, the Democratic machine has largely abandoned her with a few exceptions.

Fellow Democratic Sens. Joe Donnelly, Indiana, and Cory Booker, New Jersey, have campaigned for the three-term incumbent in hopes of getting out the moderate and black vote, which she will need to win.

And on Monday, Hillary Clinton, a potential 2016 White House candidate and arguably the most influential Democrat in the country, is holding a private fundraiser in New York City for the Louisiana Democratic Party and Landrieu's political action committee.

However, liberal outside groups have given less money to Landrieu, compared to conservative groups for Cassidy, roughly $13 million to $11 million, based on the most recent OpenSecrets.org report. And the Democratic Senatorial Campaign Committee has pulled its TV ad money.

Last month, Senate Majority Leader Harry Reid finally allowed a vote on her bipartisan legislation to build the Keystone XL pipeline, popular among voters in oil-rich Louisiana. However, the measure failed by one vote, with Senate Democrats apparently afraid to help Landrieu for fear support for the GOP-championed legislation could haunt them in their next election.

“The bells are tolling again and again,” conservative political strategist Matt Keelen told FoxNews.com. “The Democratic Party has abandoned her. … They couldn’t even muster (that) on the vote.”

Fowler argued that Landrieu’s best strategy now is to localize the race by highlighting her successful efforts to help the state recover from the 2010 Gulf of Mexico oil spill and Hurricane Katrina in 2005.

Landrieu beat Cassidy on Nov. 4, 42-to-41 percent, but the race went to a two-person runoff because neither could get 50 percent of the vote.

A third candidate, Republican Rob Maness, got 17 percent of the vote. Maness has since endorsed Cassidy, and most of his votes are expected to stay Republican.

A Cassidy win would give the GOP a net total of nine Senate seats this year.

Cassidy and Landrieu met Monday night in New Orleans for their final Senate debate, a testy affair in which Landrieu accused Cassidy of bilking taxpayers in his medical teaching work at the LSU hospital system. She suggested Cassidy collected a $20,000, taxpayer-funded annual salary for little or no work, describing gaps in his timesheets.

Cassidy said he did nothing improper and provided care to the poor and uninsured. He stuck to his message of tying the Democratic senator to unpopular President Obama, saying Landrieu's support for Obama's agenda damaged the state.

Landrieu is also facing the same political headwind that resulted in defeat for several other Senate Democrats and gave Republicans control of the upper chamber.

Republicans hammered away that Landrieu dutifully voted in support of the legislative agenda of President Obama, who has record-low approval ratings. And she is also part of dwindling breed -- elected Democrats in the South.

A loss would make her the last Democratic senator in the Deep South.

Neither campaign nor the DSCC returned calls seeking comment.

In the closing days of the campaign, Democrats have alleged that Cassidy, a medical doctor, was paid for teaching work at the LSU Health Sciences Center that he failed to perform and that he did medical work while Congress was holding hearings and votes.

Cassidy has disputed the reports and is bringing in some of his party’s biggest names to help him close the deal.