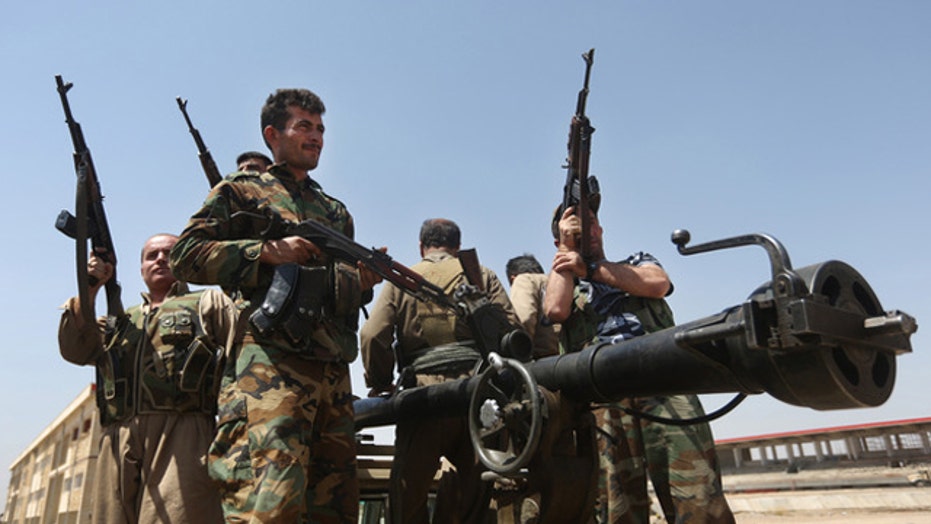 Kurdish fighters and leaders are intent on carving an independent state out of Northern Iraq after they wrest back vital territory from the Islamic State "whether the U.S. likes it or not," according to American and international security forces on the ground.

Kurdish forces, whose commanders say they aren't getting enough help from the U.S. and other allies, have been making headway against ISIS. But while re-taking Mosul from ISIS was seen as a key achievement by the U.S., the new focus is squarely on holding Kirkuk, a northern Iraqi city claimed by many to be the cultural Kurdish capital.

"They are pushing hard in Kirkuk to hold Kirkuk and keep ISIS out and once that is done, they will move forward with plans for their country," one operator on the ground with direct connections to Kurdish leaders told Fox News. Another source, who is directly advising Kurdish leaders, said "they have only one goal, whether the U.S. likes it or not."

Lahur Talabani, head of the Kurdistan Intelligence Agency, acknowledged his interest in making an independent nation a reality. "Everybody's dream, every single Kurd, wants to have a free independent Kurdistan." At the same time, he said surrounding nations that have Kurdish immigrants "will do everything within their power to stop us."

"Of course we want to be free. It will be difficult, but we would love for it to happen right now," he said.

For years, many within the autonomous region inside Iraq have lobbied for the establishment of an independent Kurdistan. But with a raging battle against ISIS, some Kurds are intent on making it happen.

A Kurdish nation would deal a blow to ongoing Western efforts to keep Iraq united, and also increase pressure on Turkey, which has a sizeable Kurdish population that might try and unite with a neighboring new nation. There are also significant Kurdish populations in two other neighboring countries, Syria and Iran.

In Syrian cities along the Turkish border, like Tal Abyad and Koabni, Kurds have fought ISIS forces for control, raising concerns in Turkey that Syrian Kurds would try to link up with the independence movement in Iraq.

There is also the issue of oil in and around Kirkuk, which would take much-needed money directly from Baghdad.

The Obama administration continues to oppose the creation of a new state. "The policy of this Administration has been clear and consistent in support of a unified Iraq," a State Department spokesman said. "A unified Iraq is a stronger Iraq and is important to the stability of the region as well."

But the spokesman stressed the U.S. and the coalition have been "very supportive" of Kurdish forces. He pointed to more than 95 airlift missions conducted in coordination with the Iraqi government, as well as shipments of 1,000 AT-4 anti-tank systems and dozens of MRAPs, with more shipments on the way.

The Kurds dispute those numbers, insisting a lot of those weapons were never transferred to them after being given to Baghdad.

"They are going to form their own country," said one international agent on the ground in the region. "They see this as the only way to save themselves."

Many within the American Special Forces community seem to agree, with one telling Fox News that they are "pissed off" because since last year most, if not all, members of the U.S. military have to stop in Baghdad before going to Kurdish territory to provide training and support. Sources say Special Forces are not allowed to take heavy weapons such as the shoulder-carried AT-4 rocket launchers and belt-fed machine guns, and are being told to leave them in Baghdad. Also, even with DELTA and other U.S. special forces currently on the ground, they are not allowed to participate in the war against ISIS and fight with the Kurds.

Kurdish leaders and international intelligence officers also told Fox News they are surrounded by people who don't like them, or don't want them to be their own country -- they equate their situation with that of Israel. And they complain that the son of former Iraqi Prime Minister Nouri al-Maliki was arrested last year in Lebanon with more than $1 million -- money they insist is part of the tranche that is not being transferred to the north. "The Kurds knew nothing was going to happen. They knew it," one operator said. "They knew they would get no American support or money from Baghdad."

Besides wide reports of ISIS atrocities in the region, a fighter on the ground in Northern Iraq tells Fox News women are already being circumcised by ISIS, and there is a strong belief the West is underestimating ISIS and its military tactics.

"ISIS enforces law by fear -- burying children alive. And their training is impressive, they also shoot their trainees if they aren't fast enough. ISIS is standing and fighting and they are attacking and they are graduate students compared to Al Qaeda. Their propaganda machine is very strong and they clearly have people behind them giving them the right guidance and military tactics," said one international security expert on the ground, who is currently advising Kurdish leadership on the fight against ISIS.

Meanwhile, the White House has taken credit for some of the Kurdish advances against ISIS, with White House Press Secretary Josh Earnest saying the reason why Syrian Kurds were able to re-take the town of Tal Abyad was directly due to U.S. support. "It's actually a direct consequence of an earlier military operation that President Obama ordered," he said.

Talabani suggested an independent Kurdistan would be good for the West.

"We're not Arabs, were not Persians, we're not Turks. ... We're Kurds. We have suffered for years," Talabani said. "Gassed by Saddam. Mass Graves. We have suffered like the Jews at the hands of these surrounding countries, and we are very pro-West. You don't find any other countries like that in this region."