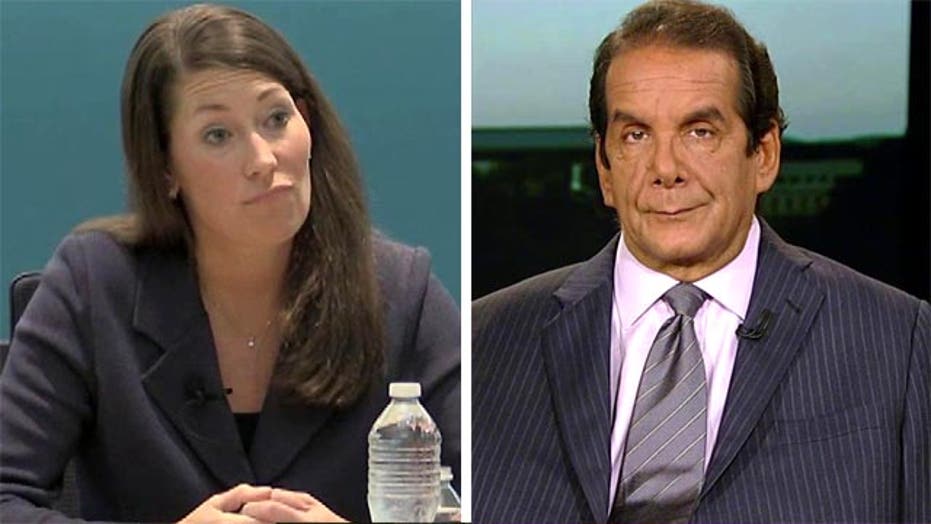 Charles Krauthammer told viewers Friday on “Special Report with Bret Baier”that for Democrats in tight midterm races, like Alison Lundergan Grimes in Kentucky,it’s not “just being tied to the president but being pushed to a position where she looks ridiculous, where she will not answer a question like who did you vote for, it's obvious she voted for the president. She's simply had to say I did.”

President Obama currently is in the middle of a three-day trip to California filled with fundraising and other events, including a Thursday evening appearance at the home of actress Gywneth Paltrow. But what is notable is where Obama is not -- on the campaign trail stumping for Democratic candidates.

In Kentucky, where the president has an approval rating of just 35 percent according to the latest Fox News Poll, Grimes refused to acknowledge whether or not she had voted for Obama. Instead she said, “You know this election isn't about the president. It's about making sure we put Kentuckians back to work.”

New Hampshire Senator Jeanne Shaheen, fighting for re-election against Republican Scott Brown, said when asked if she’d like the president to come campaign for her, “well the president is dealing with a lot of crisis in the world right now and I think it’s important for him to address what’s happening with ISIS. To continue to address the Ebola scare and so I expect him to be in Washington."

Krauthammer , a syndicated columnist and Fox News contributor, said that the refusal of some Democrats in key races to be seen with the president is clearly linked to his own poor ratings. “Obama is now under 40 percent, 39, much lower in these states of course,” Krauthammer said. “And I think what happened is he got a bit of a bump when he made the speech on ISIS, he finally showed, he showed some signs of life, he was actually doing something.

“But now that that's worn off, I think that he resumes the slide that he was in before, that it's worn off because we can see that nothing real is happening on the ground in Syria and Iraq and we are actually losing…So I think that yes, he had a temporary halt of the slide, and the slide continues and the more it continues, the more it weighs down on the Democrats.”