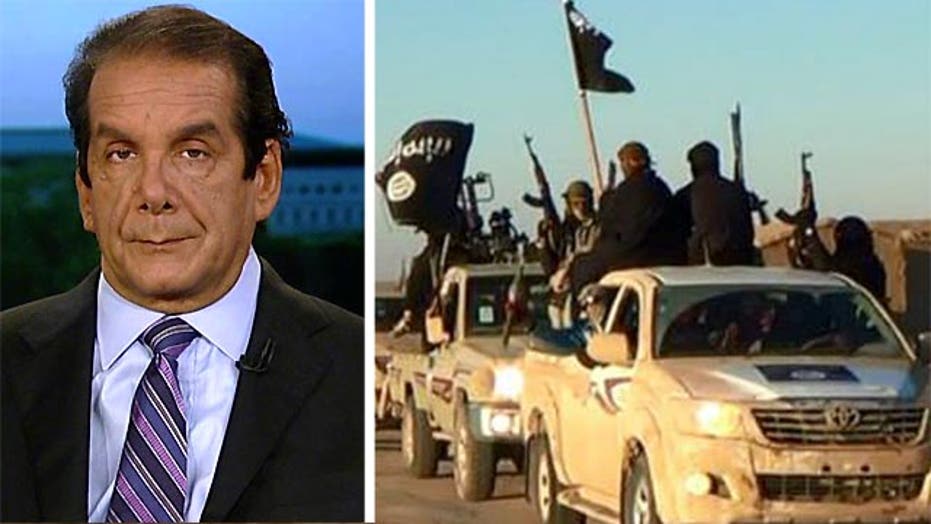 Krauthammer: ISIS 'declared war' on US

Charles Krauthammer said Thursday any military exertion against ISIS will be serious, costly and long.

Charles Krauthammer said Thursday on "Special Report with Bret Baier" that when the Islamic State released videos showing the beheading of two American journalists they “declared war on us” and, in return, President Obama’s address to the nation Wednesday night was declaring war on the militant group.

Krauthammer, a syndicated columnist and a Fox News contributor, said there was no question that Obama was committing to "serious military exertion" by announcing a drastically expanded campaign against the militants.

"Clearly, what the president was doing yesterday was to declare war on (the Islamic State)," he said. "They want to play with words? Okay, but the problem is if you want to commit the nation to a serious military exertion it will be a serious one, it will be a costly one and it will be a long one."

However, Krauthammer said he was concerned because he felt Obama's tone after the address seemed to minimize the expanded military campaign.

"You can't play around with language and pretend it is something else and that disturbs me," he said, "and the tone of the president last night and in the follow-up tone today which is all about minimizing what's really going on here. You really lose confidence in their seriousness about carrying it out and being open with the American people."