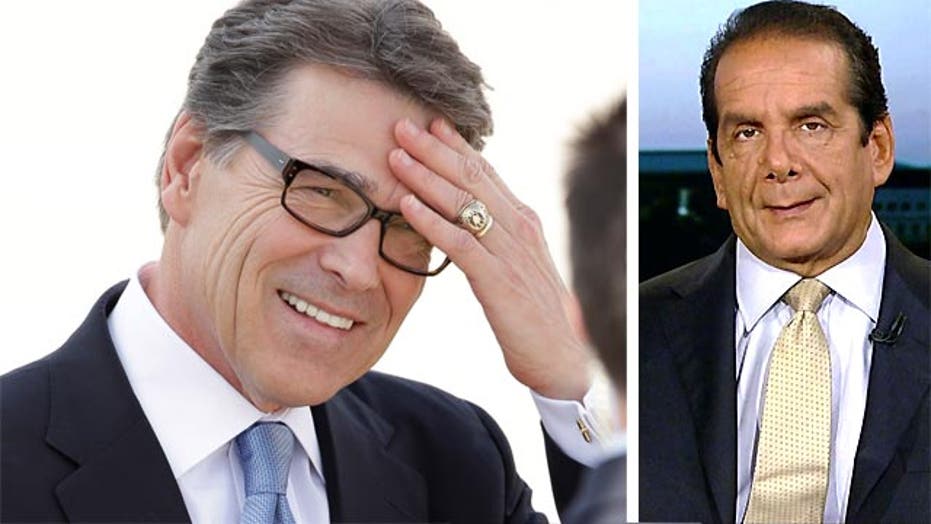 Krauthammer: Rick Perry a possibility in 2016

Governor Rick Perry (R-TX)could be a major GOP candidate in the 2016 presidential election, especially after his dogged criticism of Obama’s poor handling of the immigration crisis along the southern border.

Charles Krauthammer said Thursday on "Special Report with Bret Baier" that Texas Gov. Rick Perry could possibly be a major GOP candidate in the 2016 presidential election, especially after his dogged criticism of President Obama’s handling of the immigration crisis along the southern border.

Perry ran for the GOP nomination in the 2012 presidential election. However, his campaign faltered after he blanked during a debate when attempting to name the third of three departments in the federal government that he would eliminate.

Krauthammer said Perry's presidential bid should not be remembered only for that gaffe.

“I do think that what we don’t quite remember is that towards the end of the primaries after the implosion in that debate where he couldn’t remember the three points, he did fairly well when the spotlight came off him and was no longer the front runner,” said Krauthammer. “He conducted himself fairly well in the subsequent debates and he came out not bad."

Krauthammer said Perry's outspoken work to attempt to fix the border crisis has helped his image as a leader, and could position him to become a strong presidential candidate in 2016.

"I think he is positioned right now, at least being visually out there, in the kind of photo op toe-to-toe on immigration and defending the border," he said. "I think that’s helped him a bit and if he wants he can be one of the major candidates."