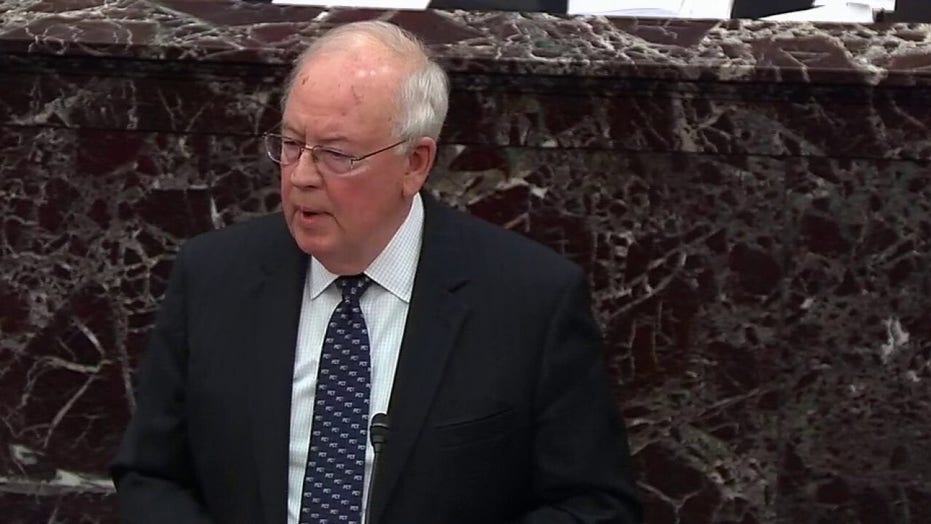 Ken Starr: You didn't follow the rules, you should have

Ken Starr, a member of President Trump's defense team in the Senate impeachment trial, referenced two recent sports cheating scandals in his defense of the president on Monday.

"And at the foundation of those authentic forms of justice is fundamental fairness," Starr said. "It's playing by the rules. It's why we don't allow deflated footballs or stealing signs from the field. Rules are rules. They're there to be followed."

AS JOE BIDEN COMPETES FOR A WIN IN IOWA, ONE GOP SENATOR US ALREADY TALKING ABOUT IMPEACHING HIM

Starr continued: "And so I submit that a key question to be asked as you begin your deliberations: Were the rules here faithfully followed?"

Last month it came to light that MLB's Houston Astros and Boston Red Sox had each used video replay technology to steal opposing teams' signs, which communicated what pitch the pitcher was about to throw, during their World Series seasons in 2017 and 2018, respectively.

Deflategate is the name given to a scandal involving the NFL's New England Patriots, who used underinflated footballs during the 2015 AFC Championship Game. It was alleged the Patriots underinflated their footballs in order to make it easier for quarterback Tom Brady and his receivers to handle the footballs in the cold weather.

ASTROS, RED SOX LOOK AHEAD IN WAKE OF SIGN-STEALING SCANDAL

Republicans have accused Democrats of rushing Trump's impeachment through the House of Representatives; not giving the House GOP time to make its case during impeachment proceedings; delaying the hand-off of the impeachment articles to the Senate for political reasons; not using all the resources available to them to secure witness testimony in the House and expecting the Senate to do so instead; dismissing potential witnesses in Trump's defense as "irrelevant"; and leaving important details out of their case to the Senate.

"Have the facts as presented to you, as a court, as the high court of impeachment, proven trustworthy?" Starr asked senators as he made his case. "Has there been full and fair disclosure in the course of these proceedings? Fundamental fairness. I recall these words from the podium last week. A point would be made by one of the president's lawyers, and then this would follow: The House managers didn't tell you that. Why not?"

Republicans have also alleged that obstruction of Congress and abuse of power, the two counts on which Trump was impeached, are not impeachable offenses.

In his portion of the arguments, Starr was not defending President Trump on the substance of the allegations against him, but rather making a procedural argument that Democrats' impeachment effort is partisan, breaks with precedent, and is flawed to the point that what they are accusing Trump of does not even rise to the level of impeachment.

Democrats have argued that such arguments deflect from the facts of the case and that the House did the best it could investigating Trump despite the administration ignoring every request for documents and witnesses associated with impeachment.

Multiple Senate Republicans have appeared open to Starr's particular line of argument as Trump's defense team cruises toward what is a near-certain acquittal on Wednesday.

"Assume for a moment that John Bolton would say what's in the New York Times article," Sen. Lindsay Graham, R-S.C., told Fox News' Martha McCallum. "You can still acquit the president. Dershowitz says you can assume all the facts most favorable to the government -- to the house managers -- and it falls well short of impeachment."

Graham was referring to a report that Bolton wrote in his book manuscript that Trump connected military aid to Ukraine with investigations into the Bidens -- the allegation at the heart of his impeachment.

Not to be outdone by the defense's contemporary references, however, impeachment manager Rep. Jason Crow, D-Colo., cited Professor Albus Dumbledore of Harry Potter fame during his closing remarks in the impeachment trial. Crow said that Dumbledore told his students that you are defined more by your choices than by your talent.