Once upon a time, Supreme Court nominees stood a good chance of garnering broad bipartisan support.

Those days are gone.

As Brett Kavanaugh, President Trump’s nominee for the Supreme Court, prepares for hearings on Capitol Hill, he can expect a far more polarized and partisan confirmation process than even the grueling nomination fights of recent administrations.

Dating back to Gerald Ford’s presidency, most Supreme Court nominees – even when facing ardent opposition – eventually won some bipartisan support during a final confirmation vote.

Kavanaugh, if confirmed, is facing the possibility of an airtight party-line vote. This, after Justice Neil Gorsuch won confirmation on a relatively narrow 54-45 vote.

To be sure, Senate Republican Leader Mitch McConnell shares responsibility for setting the intensely partisan tone over court nominees, by refusing to consider then-President Barack Obama’s nomination of Judge Merrick Garland in 2016.

But the Trump era has witnessed perhaps the most consistently polarized judicial confirmation process for Supreme Court nominees in modern times.

Before Kavanaugh was even announced, some Democratic senators made clear they would not consider voting for him.

“He’s a deeply, deeply conservative justice, way out of the mainstream,” Senate Democratic leader Chuck Schumer, D-N.Y., said on the Senate floor after it was made official.

Conservatives have pushed back, suggesting Democrats are against anyone Trump nominates. To make that point, they pounced on a mistake by the Women’s March, an organization that sent out a press release slamming Trump’s nominee as “extremist” but forgot to replace the placeholder “XX” in the text with Kavanaugh’s name.

“This was in some cases quite literally a fill-in-the-blank opposition,” Senate Majority Leader Mitch McConnell said in a floor speech. “They wrote statements of opposition only to fill in the name later.”

But uncompromising opposition to high court nominees may be the new norm under the Trump administration.

PENCE 'VERY ENCOURAGED' BY REACTION ON CAPITOL HILL TO KAVANAUGH 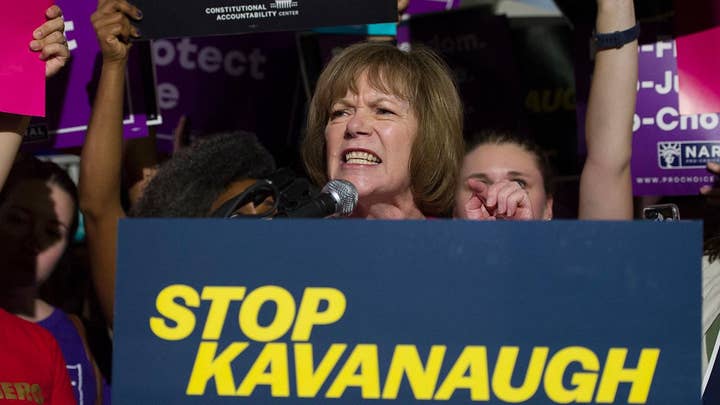 Of course, during that time period, there were a few high-profile examples of polarizing picks who faced ardent opposition, including those barely confirmed or who never made it out of the confirmation process.

Aside from Garland, Robert Bork’s nomination was famously rejected by the Senate in 1987. Clarence Thomas squeaked by in 1991 by in a 52-48 vote.

Harriet Miers withdrew her 2005 nomination amid questions about her qualifications.