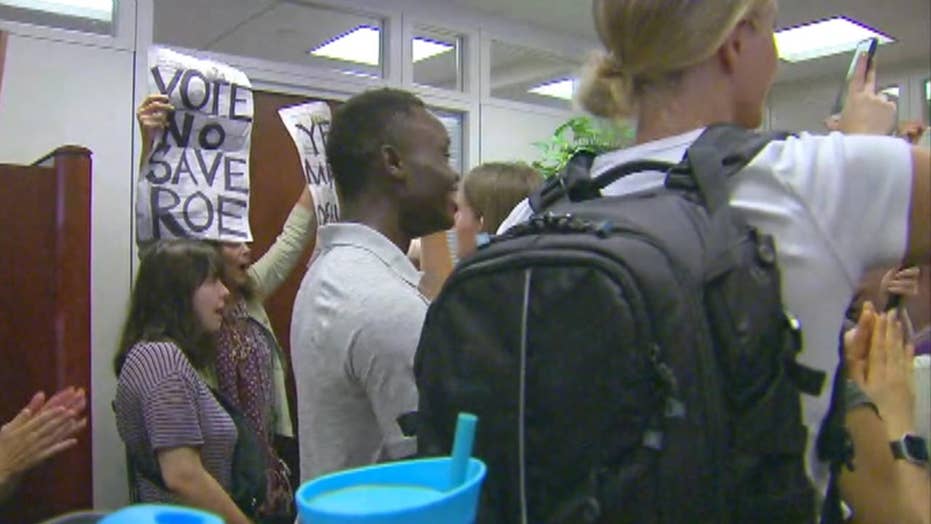 Protesters took over Senate Judiciary Committee Chairman Chuck Grassley's office as the committee entered its third day of Supreme Court hearings to — once again — call on lawmakers to deny the confirmation of nominee Brett Kavanaugh.

“Chuck Grassley, come out, we’ve got some things to talk about," the protesters repeated.

Capitol Police are aware of the protesters and are "standing by" to remove them if necessary, Fox News confirmed Thursday morning.

The protesters said they wouldn't leave Grassley's office until he agreed to delay the hearings.

“Shut Brett Kavanaugh down," some commented.

Michael Zona, communications director for Grassley, told Fox News he offered to speak with demonstrators Thursday morning but they declined.

Kavanaugh's opening remarks were delayed 77 minutes Tuesday after Democrats banded together to call for a delay as they reviewed the last-minute release of 42,000 documents. They also complained about a lack of documents related to Kavanaugh’s service in the Bush White House.

Harris and Sen. Richard Blumenthal, D-Conn., moved to adjourn and postpone the hearings until they were able to review all of the newly-submitted materials — a request that received wild praise from protesters in the audience.

But Grassley swiftly denied their demand.

“Can I ask my colleagues on the other side of the aisle how long you want to go on with this because I’m not going to entertain any of the motions you’re making, we’re not in executive session and I think we ought to level with the American people -- do you want this to go on all day?” he asked.