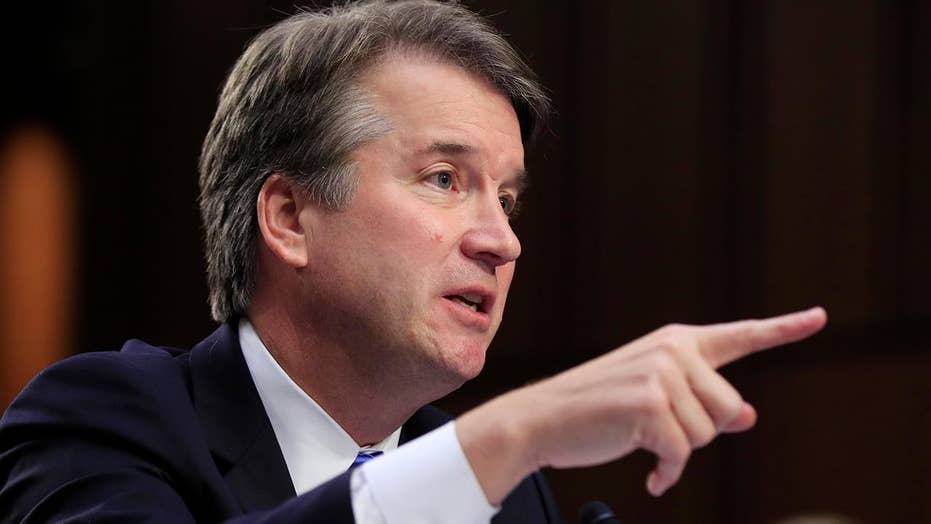 Judge Brett Kavanaugh explains why he cannot discuss cases or issues that may become before him during his Supreme Court confirmation hearing.

Kavanaugh said he studied past hearings of Supreme Court nominees, including those of the eight current justices, and how they reacted when asked about specific cases. He pointed specifically to Justice Ruth Bader Ginsburg, who during her 1993 confirmation hearing said it would be wrong for her to “preview in this legislative chamber how I would cast my vote on questions the Supreme Court may be called upon to decide" – a move that has since been dubbed the “Ginsburg rule.”

Kavanaugh told lawmakers that, keeping in line with that “nominee precedent,” he will give “no hints, no forecasts, no previews” during the hearings – with a possible exception of questions about older cases.

He also cited Justice Elena Kagan, saying she was opposed to giving a “thumbs up or thumbs down on a case.”

KAVANAUGH GRILLED BY DEMOCRATS ON ABORTION AND GUNS, AS PROTESTERS DISRUPT HEARING

During questioning by Sen. Dianne Feinstein, D-Calif., Kavanaugh declined to answer a question about whether a president should be required to respond to a subpoena.

“So that’s a hypothetical question about what would be an elaboration or difference from US v. Nixon’s precise holding, and I think going with the Justice Ginsburg principle – which is really not the Justice Ginsburg alone principle; it’s everyone’s principle on the current Supreme Court – and as a matter of the canons of judicial independence, I can’t give you an answer on that hypothetical question,” Kavanaugh said.

Kavanaugh has often praised US v. Nixon, the landmark Supreme Court decision which required then-President Richard Nixon to comply with a subpoena from a special prosecutor who sought tapes and documents pertaining to the Watergate scandal.

Kavanaugh has maintained he was not asked about how he would rule on certain cases, specifically Roe v. Wade, before his nomination.