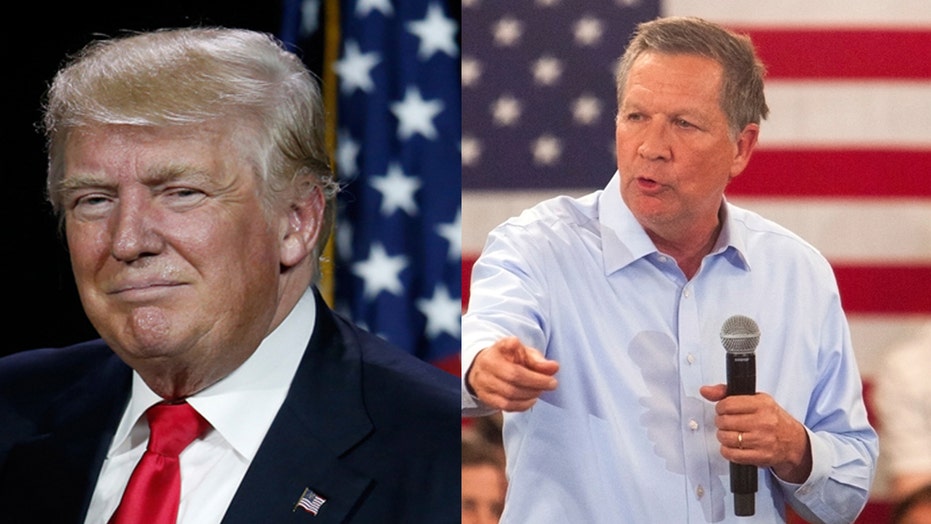 Bias Bash: Every previous Republican candidate that has gone on to win the presidency won Ohio. Ellen Ratner on how Trump is doing well in Ohio and how the conventions will help his Ohio votes

Ohio Gov. John Kasich is long gone from the Republican presidential primary but on Sunday left the door open to finally endorsing Donald Trump while also predicting Trump winning his home state will be “really difficult."

Kasich, a bitter primary rival, addressed the possibility of an endorsement, with less than 100 days remaining before Election Day.

"We still have time. That's something I think about a little bit but not a lot," he told CNN.

Kasich, whose only primary win was in Ohio, has created problems for the Trump campaign, despite conceding in May to the GOP presidential nominee -- refusing to endorse Trump or attend official events during the party’s nominating convention last month in Cleveland.

Such actions appear to have so far hurt efforts to create state party unity and Trump’s chances of winning Ohio, considering no GOP presidential nominee has been elected to the White House without winning the state.

“He's going to win parts of Ohio where people are really hurting," Kasich told CNN's "State of the Union." “But I still think it's difficult if you are dividing to be able to win Ohio. I think it's really, really difficult."

And the campaigns for Trump and Democratic presidential nominee Hillary Clinton have already made several stops in Ohio since their respective party’s nominating conventions concluded a couple of weeks ago.

Winning Ohio and other so-called Rust Belt states, whose populations and economies have dwindled over recent decades with the decline of U.S. manufacturing, appears essentially in what would or could be Trump’s narrow path to victory.

"There will be sections he will win because people are angry, frustrated and haven't heard any answers,” Kasich also said Sunday. “But I still think it's difficult if you are dividing to be able to win Ohio."

Polls show Clinton and Trump deadlocked in the state.

Kasich also attempted to explain his decision not to attend the convention, saying, "If I weren't prepared to get up there and endorse the nominee, I thought it was inappropriate to go.”