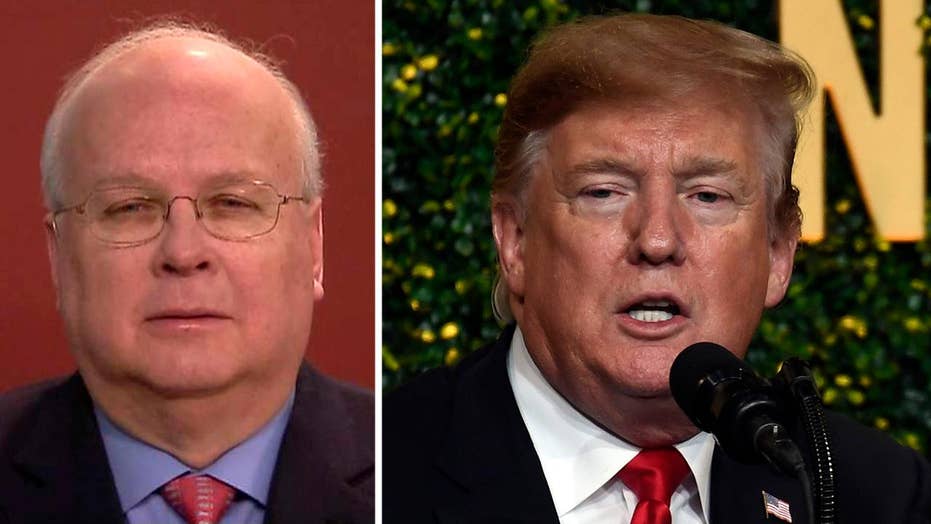 After President Trump warned that the GOP needs to take up health care reform or risk getting "clobbered," Karl Rove agreed Wednesday, adding that Republicans need to do all they can to diminish the advantage Democrats now hold on health care ahead of the 2020 election.

"He's right that the party has to have an answer on health care," the former White House Deputy Chief of Staff to President George W. Bush told "America's Newsroom."

TRUMP DOUBLES DOWN ON THREAT TO CLOSE BORDER: 'THIS IS A NATIONAL EMERGENCY!'

The Fox News contributor pointed out that health care is the number two issue for voters, with jobs and the economy being first.

"I've long argued the Republican Party needs to do a better job on health care," Rove said. "However, you have to have a plan and the problem is the administration went out and said let's vote on it without having a plan. Health care is complicated and you better have thought this thing through...otherwise you're not able to move forward."

Trump doubled down Wednesday morning, saying he believes health care "will be a great campaign issue" for Republicans.

Leading up to the election, Rove said, Republicans need to have "incremental improvements in the health care system...that make sense to ordinary Americans."

Sen. John Thune, R-S.D., told Fox News earlier in the day the president would like to pass health care now but has one big hurdle.

SEN. THUNE: REPUBLICANS MUST WIN HOUSE IN 2020 TO GET HEALTHCARE REFORM

"The challenge he has right now is he's running into the political obstacle of a Democrat-controlled House whose idea for health care reform is a $36 trillion one-size-fits-all government-run plan that would take health insurance coverage away from 180 million Americans," Thune said.

Rove believes Republicans need to do a better job attacking Democrats on "Medicare for all," adding it was really "single-payer, government-run health care" that will end in "delays, rationing, long waits getting in to see your doctor for a procedure."

But, he said, they need to couple it with Republican ideas of how to put the patient in charge and how to improve the health care system.

"The battle for 2020 is going to depend, not by taking this issue away from Democrats -- never going to be able to do that -- but diminishing their advantage on this issue...Democrats have a big advantage on health care. It is useful to reduce that advantage as we go into the 2020 election."