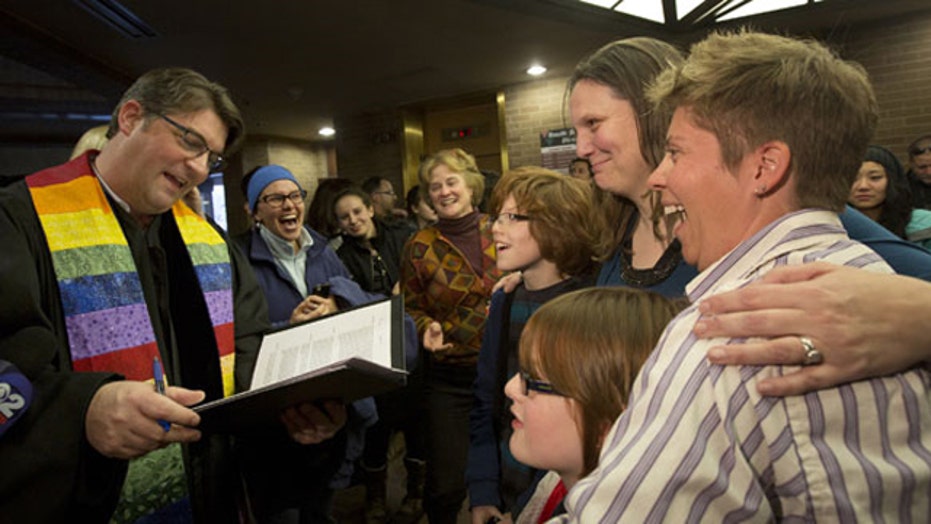 Federal benefits would be granted to legally married same-sex couples

Attorney General Eric Holder announced Saturday evening that the Justice Department will now follow a landmark Supreme Court ruling on same-sex spouses, which means they will no longer be compelled to testify against each other in civil and criminal cases.

The policy changes mean same-sex spouses also should be eligible to file jointly for bankruptcy and have the same rights and privileges in federal prison as inmates in heterosexual marriages.

Prosecutors have used various legal challenges against the spousal privilege. But Holder made clear the federal government will no longer make such challenges, even in states where same-sex marriages are not recognized.

The changes will officially be made through a policy memorandum to be issued Monday.

“This means that, in every courthouse, in every proceeding, and in every place where a member of the Department of Justice stands on behalf of the United States -- they will strive to ensure that same-sex marriages receive the same privileges, protections and rights as opposite-sex marriages under federal law,” Holder said at the Human Rights Campaign’s Greater New York Gala.

Among the agencies under the Justice Department that will be impacted by the changes are the FBI, the Bureau of Prisons and the Bureau of Alcohol, Tobacco, Firearms and Explosives.

“This landmark announcement will change the lives of countless committed gay and lesbian couples for the better,” said campaign President Chad Griffin. "While the immediate effect of these policy decisions is that all married gay couples will be treated equally under the law, the long-term effects are more profound. Today, our nation moves closer toward its ideals of equality and fairness for all."

Holder's speech was criticized by the conservative National Organization for Marriage.

"This is just the latest in a series of moves by the Obama administration, and in particular the Department of Justice, to undermine the authority and sovereignty of the states to make their own determinations regulating the institution of marriage," said Brian Brown, the group's president. "The changes being proposed here to a process as universally relevant as the criminal justice system serve as a potent reminder of why it is simply a lie to say that redefining marriage doesn't affect everyone in society."

Holder compared this generation’s efforts to achieve same-sex marriage rights to those in the 1960s for achieving civil rights and said the stakes “could not be higher.”

"The Justice Department's role in confronting discrimination must be as aggressive today as it was in Robert Kennedy's time," Holder said of the attorney general who played a leadership role in advancing civil rights.

The changes are the most recent application of a Supreme Court ruling that struck down a provision in the Defense of Marriage Act defining marriage as the union of one man and one woman. The decision applies to legally married same-sex couples seeking federal benefits.

After the Supreme Court decision last June, the Treasury Department and the IRS said that all legally married gay couples may file joint federal tax returns, even if they reside in states that do not recognize same-sex marriages.

The Defense Department said it would grant military spousal benefits to same-sex couples. The Health and Human Services Department said the Defense of Marriage Act is no longer a bar to states recognizing same-sex marriages under state Medicaid and Children's Health Insurance Programs. The U.S. Office of Personnel Management said it is now able to extend benefits to legally married same-sex spouses of federal employees and annuitants.

--The Justice Department will recognize that same-sex spouses of individuals involved in civil and criminal cases should have the same legal rights as all other married couples, including the right to decline to give testimony that might incriminate their spouse.

--The U.S. Trustee Program will take the position that same-sex married couples should be eligible to file for bankruptcy jointly and that domestic support obligations should include debts such as alimony owed to a former same-sex spouse.

-- Federal prisoners in same-sex marriages will be entitled to visitation by a spouse, inmate furloughs during a crisis involving a spouse, escorted trips to attend a spouse's funeral, correspondence with a spouse and compassionate release or reduction in sentence based on an inmate's spouse being incapacitated.