The Department of Justice has tapped an outside prosecutor to review the case of former National Security Adviser Michael Flynn, Fox News has learned.

A senior Justice Department official told Fox News on Friday that Jeff Jensen, the U.S. Attorney for the Eastern District of Missouri, has been assigned to Flynn’s case.

Jensen will be working hand-in-hand with the lead prosecutor of Flynn case, Brandon Van Grack, according to the official.

The case against the former US Army lieutenant general has gone through years of twists and turns, with sentencing postponed repeatedly over the last two years. Flynn's supporters have insisted he is innocent but was forced to plead guilty when his son was threatened with prosecution and he exhausted his financial resources.

The announcement of the review of Flynn’s case comes amid a tumultuous week at the Justice Department.

On Monday, federal prosecutors recommended a sentence of between 87 and 108 months in prison for Trump associate and GOP operative Roger Stone, after he was convicted on seven counts of obstruction, witness tampering and making false statements to Congress on charges that stemmed from former Special Counsel Robert Mueller’s investigation.

But in a stunning reversal, as Fox News first reported, leadership at the Justice Department overruled the prosecutors on the case, scaling back the proposed sentence for Stone, which immediately led Democrats to accuse President Trump of interfering in the process by tweeting about his displeasure with the Justice Department. Trump denies it, and the case has been complicated further by questions over possible juror bias. 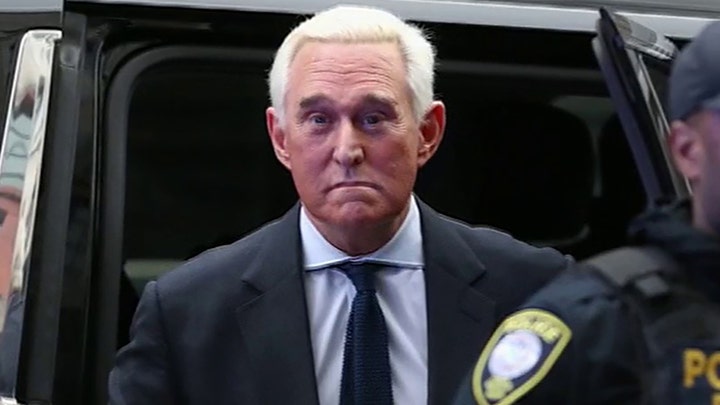 The probe into Flynn’s case, though, comes as the timeline for the former national security adviser’s sentencing remains at a standstill.

Last month, Flynn and his attorney Sidney Powell moved to withdraw his guilty plea for making false statements to the FBI about his communications and conversations with former Russian ambassador Sergey Kislyak—which stemmed from Mueller’s probe as well.

Powell, in the filing, said the move to withdraw his guilty plea was “because of the government’s bad faith, vindictiveness and breach of the plea agreement.”

“The prosecution has shown abject bad faith in pure retaliation against Mr. Flynn since he retained new counsel,” she wrote. “This can only be because, with new, unconflicted counsel, Mr. Flynn refused to lie for the prosecution.”

DOJ SEEKS UP TO SIX-MONTH PRISON SENTENCE FOR MICHAEL FLYNN

The filing added: “Justice is not a game, and there should be no room for such gamesmanship in the Department of Justice.”

"Michael T. Flynn is innocent. Mr. Flynn has cooperated with the government in good faith for two years. He gave the prosecution his full cooperation," the attorneys added

Flynn’s move to request a withdrawal of his guilty plea came just days after the Justice Department reversed course to recommend up to six months of prison time for him, alleging he was not fully cooperating or accepting responsibility for his actions.

The timeline of Jensen’s new investigation is unclear at this point.