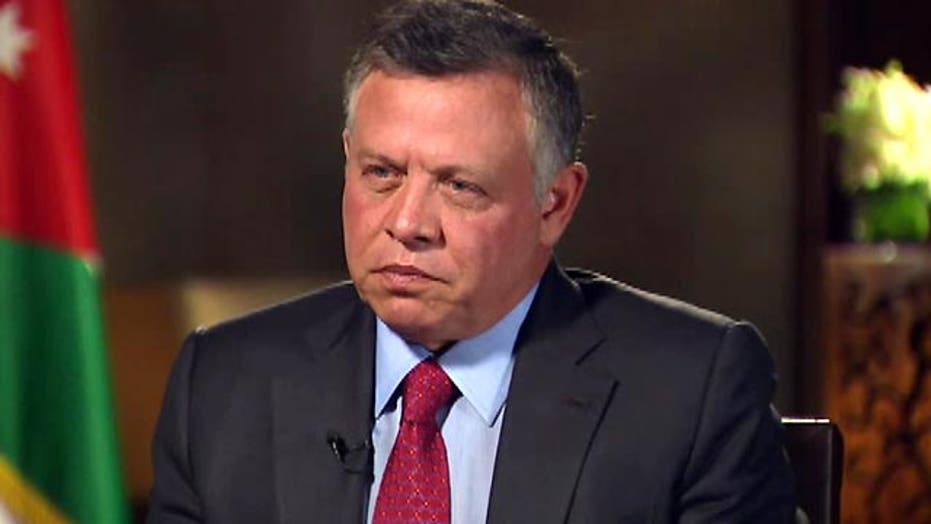 King Abdullah II: We're at war with 'outlaws of Islam'

Bret Baier sits down with king of Jordan

Jordan’s King Abdullah II said Monday that airstrikes have increased inside Syria and Iraq following the murder of a Jordanian pilot burned to death earlier this year by Islamic State terrorists.

Abdullah, who was interviewed on “Special Report with Bret Baier,” said he has not ruled out using ground troops inside Iraq. He also talked about the possibility of taking out ISIS fighters one stronghold at a time.

In the wide-ranging interview, Abdullah also said the Middle East's relationship with the West is undergoing an evolution.

"I think the relationships have changed. I think Arab spring was a lesson for all of us in the region on how we deal with our friends. We express our views to our Western allies. I think the difference is now is that we express them quite strongly."

He also said that America’s role in the Middle East has changed and for him has been “a wakeup call.”

"We need to stand more on our two feet and make our own decisions and be more bullish and straightforward about it. At the end of the day, I think I know what's best for the country and for the region."

Beyond security, Abdullah told Baier, one of his biggest worries is the economy. Jordan’s economy has been fairly resilient in the past but new political pressures are testing its strength.

Energy security has been hit hard by volatility in the region as well as a growing unemployment rate that currently sits at 13 percent.

"There are 1.5 million Syrian refugees in our country, that's almost 20 to 21 percent of our population," Abdullah said. "This year only 28 to 29 percent of the refugee budget is being covered by the whole international community and the rest we have to cover. That's pretty depressing quite honestly."