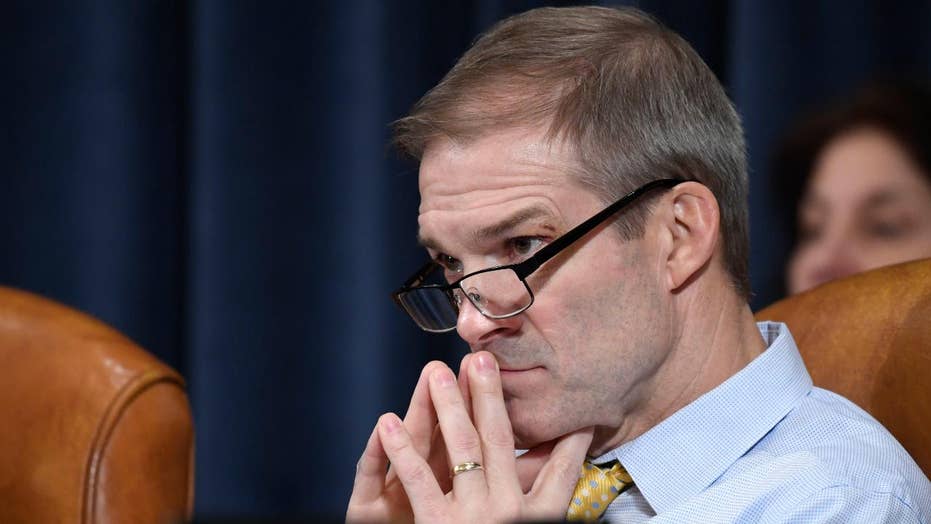 Republican Rep. Jim Jordan blasted Ambassador to the European Union Gordon Sondland for omitting President Trump’s apparent claim that he wanted “no quid pro quo” with Ukraine from his opening statement, during his testimony at Wednesday's impeachment hearing.

The story of the Trump-Sondland exchange emerged as a key moment for Republicans defending Trump's role in the Ukraine issue. While not mentioning it in his opening statement, Sondland eventually said under questioning that Trump told him "I want nothing, I want no quid pro quo" -- apparently concerning whether military aid and more was tied to his requests for politically advantageous investigations from Ukraine.

Jordan came out firing at Sondland for not including that key quote in his lengthy opening statement, as he read it back to the witness.

"You can't find the time to fit that in a 23-page opening statement," Jordan fumed.

Sondland said he did not mean to omit it from his opener and that he had limited space.

The Ohio Republican went on to press Sondland about a proposed White House meeting between Trump and Ukrainian President Volodymyr Zelensky that was allegedly tied to Ukraine announcing an investigation related to a natural gas company where former Vice President Joe Biden’s son was on the board.

“When the chairman asked you about security assistance dollars, you said there had to be a public announcement from Zelensky,” Jordan said. “So I’m asking you a simple question, when did that happen?”

“They got the call on July 25th,” Jordan continued, referencing the infamous phone call between Trump and Zelensky that sparked a whistleblower complaint. “They got the meeting, not at the White House but in New York on September 25th, they got the money on September 11th.”

Sondland’s comment that Trump said “no quid pro quo” has been seized upon by both the president and GOP lawmakers as proof of his innocence in the House impeachment inquiry.

Earlier on Wednesday, Trump argued Sondland’s testimony should exonerate him of any claims of wrongdoing in the ongoing impeachment inquiry into him.

Speaking to reporters before departing on a scheduled trip to Texas, Trump claimed that Sondland’s testimony means “it’s all over” for the proceedings and that the House inquiry into Trump should come to a halt.

“I just noticed one thing and that would mean it’s all over,” Trump said on the White House lawn before reading from handwritten notes taken during Sondland’s testimony.

Sondland testified about a conversation with Trump where he asked the president what he wanted from Ukraine.

Sondland, though, said he understood that the aid was in fact linked to the investigations.