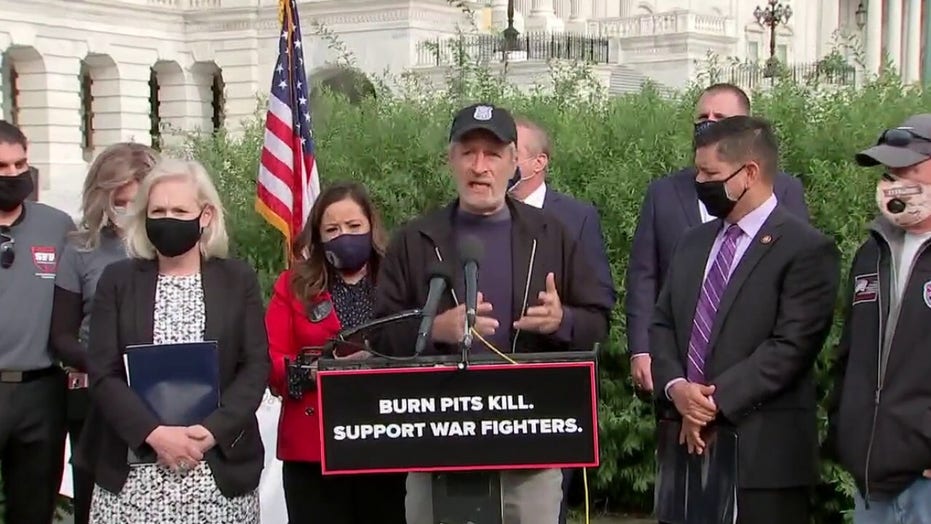 Jon Stewart joined Sen. Kirsten Gillibrand, D-N.Y., and others Tuesday morning in calling on Congress to provide financial assistance to veterans suffering from ailments as a result of toxic exposure from burn pits the military used to dispose of waste in Iraq and Afghanistan.

Gillibrand announced a new bill that would establish presumptive coverage for service members, who presently are often denied benefits due to claims that there is insufficient evidence linking their illnesses to the burn pits.

“This is the same battle Vietnam veterans had to bring to fight for coverage because of Agent Orange,” Gillibrand said at a Tuesday news conference. She noted that in 1991 Congress finally took action and established a presumptive coverage for Vietnam veterans.

“We have to do the same for the veterans of the war on terror,” she said, while explaining her bill, which would do just that.

“To put it simply, the bill says that if you were there you are covered. Plain and simple,” she said. "This bill applies common sense and common decency to a very broken process.”

The bill includes a list of diseases resulting from a veteran's service that would receive coverage. Under the proposed law, some of the medical conditions included on the list include asthma, chronic obstructive pulmonary disease and cancers of any type.

Stewart noted that it was last year when he appeared before Congress to successfully lobby for funding for 9/11 first responders who became ill due to conditions at Ground Zero, after previous failed attempts by sick patients to get lawmakers’ attention.

“When it was done, we thought it was done. But it turns out that the warfighters that were sent to prosecute the battle based on the attack on 9/11 now suffer the same injuries and illnesses that the first responders suffer from, and they’re getting the same cold shoulder from Congress that they received,” Stewart said. “And so the fight starts again.”

Stewart claimed that members of Congress simply do not want to spend the money to help.

“They don’t want to do this for these veterans because they think it’s too expensive,” he said. “We always have money for war. We never have money for the warfighter.”

The former host of “The Daily Show” argued that the money is there, it just needs to be used for this purpose. He claimed that 5% of the Pentagon’s $80 billion contingency operations fund would cover it. He also said that $400 billion goes from the Pentagon to defense contractors, and a 2% tax on those contractors would cover it as well.

“This is an eminently fixable problem,” Stewart said. “The money is already in the system, we’re just not allocating it to the right people.”

Stewart and Gillibrand were joined by Rep. Raul Ruiz, D-Calif., who is also sponsoring legislation, as well as family members of veterans who became ill after their service.