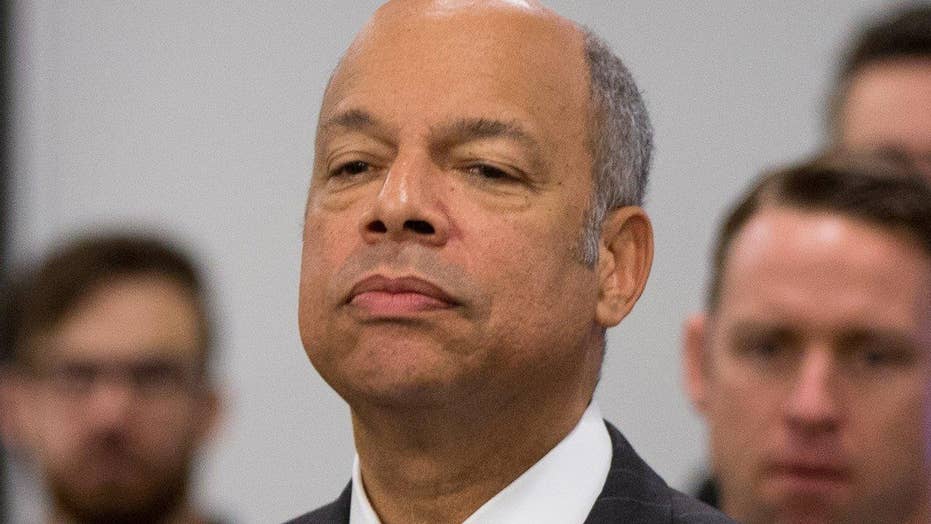 DHS Secretary Jeh Johnson says there is credible intel that ISIS wants to infiltrate the US refugee system. What does this mean for Pres. Obama's plans to bring Syrian refugees into the US? Rep. Adam Kinzinger goes 'On the Record'

Homeland Security Secretary Jeh Johnson acknowledged this week that terrorists could in fact try to infiltrate the country’s refugee system, giving a nod to congressional concerns that have mounted for weeks about potential gaps in the programs.

“We do have to be concerned about the possibility that a terrorist organization may seek to exploit our refugee resettlement process,” he said Wednesday. “This is true of this country, that’s true of every other country that accepts refugees.”

In saying so, Johnson stressed that the Obama administration is continuing to reevaluate the program, and has done so with refugees from Iraq and Syria. He made the comments while officially updating the DHS terrorism alert system -- issuing a bulletin reminding Americans about the ongoing concerns regarding an attack on U.S. soil. “As we saw in the recent attacks in San Bernardino and Paris, terrorists will consider a diverse and wide selection of targets for attacks,” the bulletin said.

The comments are likely to fuel the Capitol Hill push for changes to the refugee vetting system.

In response to Johnson’s acknowledgement that terrorists could try to exploit the program, Republican Rep. Adam Kinzinger, R-Ill., suggested the DHS boss was behind the curve.

“I mean this respectfully to the secretary, but, duh,” Rep. Adam Kinzinger, R-Ill., told Fox News on Wednesday. “I mean, this is obvious that they can infiltrate this way. They have said it in social media posts, they obviously want to attack us here at home. This is quite obvious.”

On Wednesday, Johnson reiterated that the government has no knowledge of a specific or credible terrorist threat against the United States but remains concerned about terrorist-inspired extremists.

His announcement marked the first change to the National Terrorism Advisory, as the system is officially known, since 2011 when the color-code system was replaced.

The system was put in place following the 9/11 attacks, when terrorists killed nearly 3,000 people in separate incidents in New York, Washington and Pennsylvania.

The bulletin issued Wednesday outlines much of what Johnson and other officials have said since the attacks in Paris last month and in San Bernardino, Calif., earlier this month. It will remain in effect until June 2016.

But he said there are “legal limits to what we can do.”