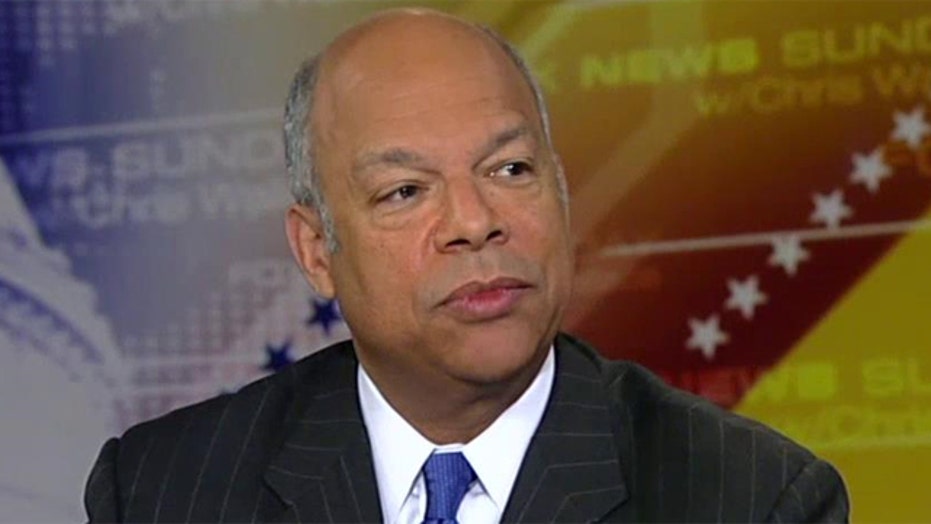 A top Obama administration official warned several times Sunday about the potential, far-reaching perils of Congress allowing the Department of Homeland Security to run out of funding in several days and got some Republican support in the Capitol Hill stalemate.

Congressional Democrats and Republicans are in a standoff over legislation that will fund the agency through late September but also roll back President Obama's executive action on immigration.

Homeland Security Secretary Jeh Johnson said allowing the agency to lose its federal funding after Friday could jeopardize the U.S efforts to thwart a domestic terror attack by the Islamic State and will result in 30,000 employees being furloughed.

“It including people I depend on every day to stay one step ahead of" the Islamic State, he told NBC’s “Meet the Press.”

He also appeared on “Fox News Sunday” and the three other major Sunday shows, arguing that failing to reach a deal would go beyond cutting off funding for the president’s efforts to defer deportation for millions of illegal immigrants to include cuts to the Federal Emergency Management Agency while parts of the country are still dealing with severe winter weather.

The legislation has already been passed by the GOP-controlled House but is stalled in the Senate.

Johnson disagreed with the argument that Senate Democrats have blocked the bill by filibustering, saying the problem is the legislation should be presented “clean” of any immigration language.

“I’m talking to every member of Congress who will listen,” Johnson told NBC. "It's absurd that we're even having this conversation about Congress' inability to fund Homeland Security in these challenging times."

Senate Majority Leader Mitch McConnell has suggested that the House pass a bill on which Senate Democrats can agree.

However, the leaders of the lower chamber have been steadfast for weeks about having already done their job.

Kevin Smith, a spokesman for House Speaker John Boehner, repeated that message Sunday by saying in an email: "The House has acted to fund the Homeland Security Department. Now it's time for Senate Democrats to stop blocking legislation that would do the same."

Graham told ABC’s “This Week” that he was “willing and ready” to pass a funding bill, then let the immigration issue play out in court.

Last week, a federal district court judge in Texas temporarily blocked the administration's plans to protect immigrant parents of U.S. citizens or legal permanent residents from deportation. The decision came as part of a lawsuit filed by 26 states claiming Obama had overstepping his authority in taking the executive action.

Johnson repeated Sunday that the administration will appeal the ruling.

Even if Congress fails to fund their agency, the remain roughly 200,000 Homeland Security employees would continue to work.

However, they would receive no pay until Congress authorizes funding.

It's a reality that was on display during the 16-day government-wide shutdown in the fall of 2013, when national parks and monuments closed but essential government functions kept running, albeit sometimes on reduced staff.

Johnson on Sunday also linked the purported Mall of America warning from the Africa-based al-Shabaab terror group and other recent terror alerts to what he described as a "new phase" of challenges by extremist groups abroad that have used alarming Internet videos and social media to gain adherents in the U.S. and potentially prod some to action.