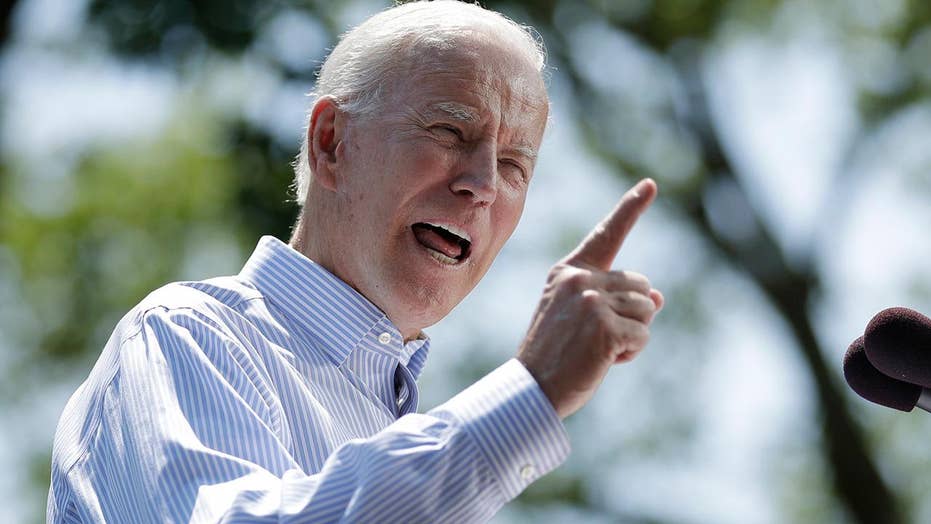 The 2020 hopeful says the president is benefiting from the policies of the Obama administration. Former CKE Restaurants CEO Andy Puzder explains why Biden is wrong

Former Vice President Joe Biden pledged on Tuesday to "defeat the National Rifle Association" as part of his 2020 campaign promise to fight for school safety.

"As President, he will secure passage of gun legislation to make our students safer, and he knows he can do it because he’s defeated the National Rifle Association twice before," Biden's plan, released on Tuesday, read.

It stated part of the plan to "defeat" the NRA included supporting legislation that banned "assault weapons" and high-capacity magazines.

His plan came after a slew of school shootings that prompted Democrats to call for gun control laws. Biden's planned seemed more moderate than other 2020 candidates' -- specifically Sens. Cory Booker, D-N.J., and Kamala Harris, D-Calif., -- in that he focused on working through Congress rather than substantially expanding executive authority in the ways others proposed doing.

The NRA did not immediately respond to Fox News' request for comment. Biden and the NRA, however, found common ground in a 1986 law that, overturned multiple gun regulations. Biden supported the law which, according to the NRA, was "the law that saved gun rights" in the U.S.

The NRA has become a major target in the periods following school shootings -- that included during the 2020 election cycle. While New York fought to pressure banks into severing ties with the organization, 2020 Democrats said they would take on the gun rights organization.

Booker, in particular, vowed to “bring a fight to the NRA like they have never ever seen before.” His gun control plan endorsed progressive measures like universal background checks but caught special attention for pushing a requirement that gun owners obtain licenses from the federal government.

Harris, in April, threatened to sign a series of executive orders -- including universal background checks -- if Congress didn't address the issue in her first 100 days as president.

Amid criticism of the NRA, Trump decried New York state's "siege" on the organization. "The NRA is under siege by Cuomo and the New York State A.G., who are illegally using the State’s legal apparatus to take down and destroy this very important organization, & others," he said.

"It must get its act together quickly, stop the internal fighting, & get back to GREATNESS - FAST!"