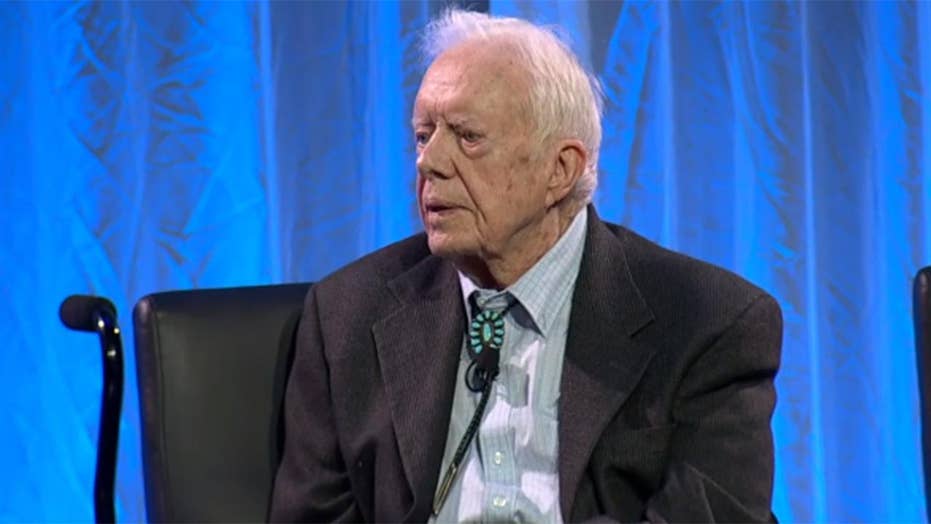 Raw video: Former President Jimmy Carter says that he believes Donald Trump lost the election and was put into office because Russia interfered on his behalf.

Former President Jimmy Carter questioned Friday whether President Trump legitimately won the 2016 election over Hillary Clinton, arguing Trump is only in office because "the Russians interfered."

The 94-year-old Democrat was speaking at a Virginia forum moderated by presidential biographer Jon Meacham, who asked how the U.S. should "deal with Russia" interfering in the country's ability to have "free and fair elections."

"I think a full investigation would show that Trump didn’t actually win the election in 2016. He lost the election, and he was put into office because the Russians interfered on his behalf," he said at the Carter Center event.

Meacham followed up by asking Carter if he was characterizing Trump as an "illegitimate president." Carter sat silently for a few seconds as the crowd laughed before responding: "Basically, what I just said, which I can’t retract.”

Carter's comments came on the heels of Trump meeting face-to-face with Russian President Vladimir Putin at the G-20 Summit in Japan, where he was criticized for jokingly telling Putin not to "meddle" in the upcoming election.

Trump, who was seated next to Putin, was asked by a reporter if he would tell "the Russian president to not meddle in the election." There was some cross talk in the room at the time.

Trump's tone and delivery were immediately called out. The AP ran a headline, "Trump Jokes to Putin: Don't Meddle in the Election."

The report said his tone was "open to interpretation but would seem to do little to silence questions about Trump's relationship with Russia in the aftermath of special counsel Robert Mueller's conclusion that his campaign did not collude with Russia in 2016."