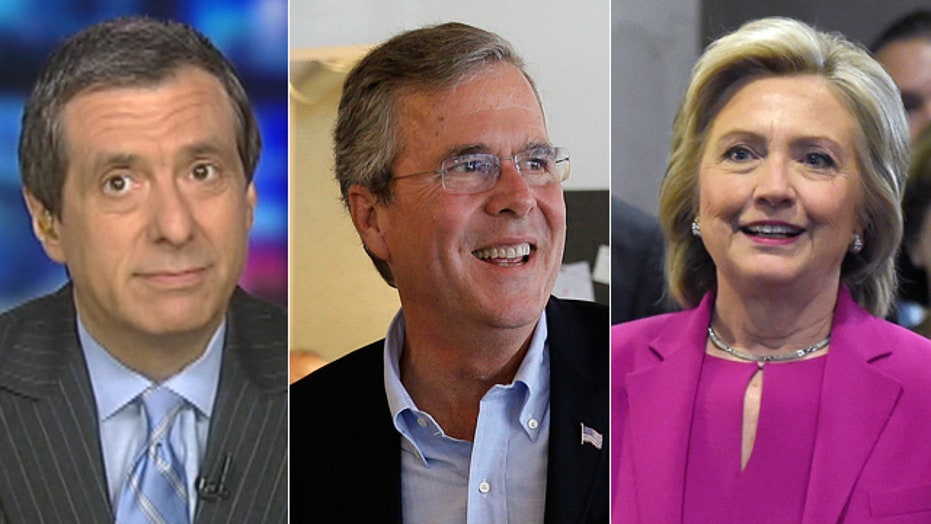 America may well get another Bush-Clinton race once this whole presidential thing shakes out, with predictable groans about royal families and political retreads.

But in looking at the coverage this past week, I was struck by this thought: This is one weak pair of front-runners.

Jeb is losing to a guy who’s never run for public office and is in hot water over comments about Mexican immigrants. In short, he’s been Trumped. (Though maybe The Donald has trumped himself by making light of John McCain’s Vietnam captivity, not that the media were in love with him before.)

Hillary is way ahead in her race, but a socialist senator is generating most of the excitement. A majority of voters have doubts about her honesty. And she’s long been at odds with the press.

As the New York Times has noted, Hillary may have raised $47.5 million, but less than one-fifth has come in contributions of $200 or less. That means big-money donors, many of whom have maxed out at $2,700, are powering her campaign. Bernie Sanders, by contrast, has gotten four-fifths of his $15 million in small donations. (Hillary has also spent a chunk of her haul, stirring concerns about another bloated, consultant-heavy campaign.)

Equally worrisome, the latest Fox News poll confirms the findings of several other surveys that Hillary has a trust problem. Some 58 percent of respondents say Clinton’s natural instincts lean more toward “hiding the truth” than “telling the truth.”

It’s hardly shocking that Hillary isn’t firing up the grass roots. She’s been in public life for a quarter century, as first lady, senator, presidential candidate, secretary of State and global celebrity. She’s a Democrat running to succeed another Democrat. And the lack of a major opponent is draining much of the drama from her race. That’s why Elizabeth Warren, not HRC, is on the cover of Time.

At the same time, even Hillary’s team is said to be concerned that Sanders, a 73-year-old who isn’t even a Democrat and who’s been a bit player in the Senate, could knock her off in Iowa. Or worse.

Yet in a New York Times Magazine piece that’s in part about the press staff micromanaging Mark Leibovich (no tweeting from her headquarters!), campaign manager Robby Mook said: “I take issue with the excitement question.”’

Jeb has problems that go beyond Donald Trump. He’s at odds with conservative Republican voters over illegal immigration and Common Core education standards. He’s raised $114 million, but he’s had to talk repeatedly about his brother and why his last name isn’t a liability.

And while Bush has been solid and substantive in his campaign, aside from his initial Iraq stumble, he has not been a dominating presence. He regularly talks to the press, in stark contrast to Hillary, but makes little news.

And Trump is looming as an obstacle for Bush, particularly with the Fox debate coming up next month.

“During one recent phone call with a political ally,” Politico says, “Bush pointedly asked about the surging real estate mogul. What, the friend recalled the former governor wondering out loud, was behind Trump’s antics, and what was he trying to accomplish?”

Jeb is trying to be the grownup in the room. He told the Los Angeles Times: "I think candidates ought to lay out proposals to solve problems rather than basically prey on legitimate fears and concerns.”

The eventual nominees often seem lackluster during the preseason. I remember lots of political and media grumbling over Mitt Romney, John McCain, John Kerry and Al Gore, whereas the likes of Howard Dean and Newt Gingrich generated more excitement. Those who win their party’s nod have to be acceptable to a broad coalition, which usually means they can’t be fire-breathing insurgents.