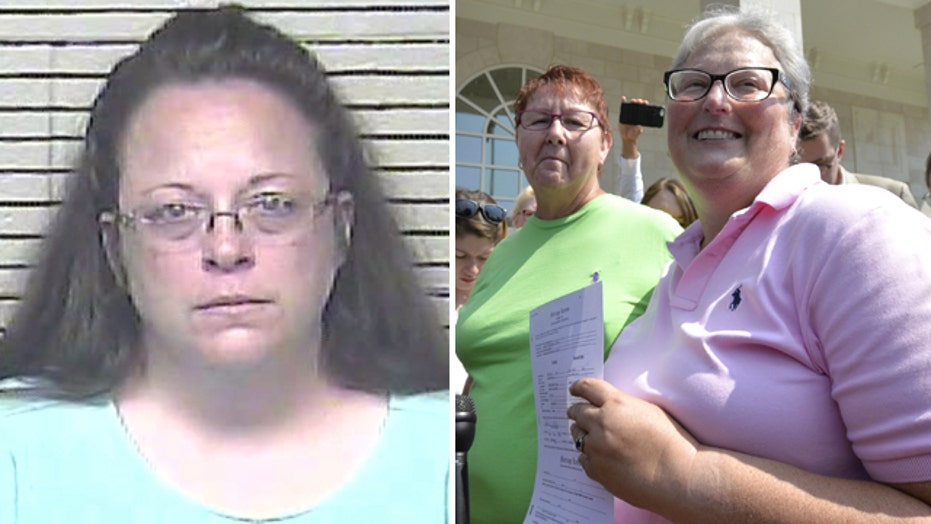 Will Carr reports on Kim Davis

A Kentucky clerk jailed for refusing to issue marriage licenses asserted that any ones that are issued without her authority Friday to gay couples in Rowan County are void and “not worth the paper they are written on” because she didn’t approve them, her attorney said.

Kim Davis “has already been doing Bible studies with herself” in jail, her attorney Mat Staver of Liberty Counsel told reporters after meeting her behind bars. He said Davis is in very good spirits and is fully prepared to stay as long it takes to defend her religious freedoms.

"She's not going to resign, she's not going to sacrifice her conscience, so she's doing what Martin Luther King Jr. wrote about in his Letter from the Birmingham Jail, which is to pay the consequences for her decision," Staver said.

At least three gay couples received marriage licenses on Friday from one of Davis’ deputies, embracing and celebrating after repeatedly being denied before Davis was imprisoned on Thursday. Their attorneys, along with Rowan County Attorney Cecil Watkins, insist the licenses are valid.

Marriage licenses in Kentucky usually have the elected clerk’s signature on them, those handed out on Friday didn’t have any signature. The Rowan County attorney and the lawyers for the gay couples insist they are valid anyway. When the judge was asked if the licenses will be considered valid without Davis' authorization, he said it was up to the gay couples to take that chance.

William Smith Jr. and James Yates, a couple for nearly a decade, were the first through the door. Deputy clerk Brian Mason congratulated the couple, shook their hands and accepted their fee of $35.50. Yates then rushed across the courthouse steps to hug his mom.

"Civil rights are civil rights and they are not subject to belief," said Yates, who had been denied a license five times previously.

Supporters cheered and a street preacher rained down words of condemnation as they left. Yates and Smith are currently planning their wedding.

Davis had refused to issue any marriage licenses after the Supreme Court’s landmark ruling in June legalizing gay marriage nationwide. After ordering her to jail, the judge told her six deputy clerks that they too faced fines and jail time if they similarly refused. Only Davis’ son, Nathan, didn’t comply.

A second couple, Timothy and Michael Long, got their license later Friday, enduring a taunt of "More sodomites getting married?" from a man inside the office. The Longs did not respond, and a worker told the man to leave.

A third couple, April Miller and Karen Roberts, got their license around midday.

"Now we can breathe. I'm still ecstatic and happy. I just can't wait to get married now," Roberts said.

The judge offered to release Davis if she promises not to interfere with her employees issuing the licenses, but she refused.

He said his wife was in good spirits after her first night in jail. Asked if she would resign, he said, "Oh, God no. She's not going to resign at all. It's a matter of telling Bunning he ain't the boss."

Davis' son, who said he supports his mother, was warned by the judge Thursday not to interfere with his fellow employees. The judge said he did not want "any shenanigans," such as closing the office for computer upgrades as they did briefly last week.

"That would show a level of disrespect for the court's order," Bunning said. "I'm hoping that cooler heads will prevail."

The judge indicated Kim Davis would remain in jail at least a week, saying he would revisit his decision after the deputy clerks have had time to comply with his order.

Staver called on the judge as well as Democratic Gov. Steve Beshear to make "reasonable accommodations" so that Davis can keep her job without violating her beliefs as an Apostolic Christian. He suggested that with an executive order, he could change all the forms in Kentucky so that none require a clerk's signature or say that they've been issued under a clerk's authority.

Kentucky lawmakers won't meet until January, unless the governor calls a costly special session, and when they do, they say they will have many changes to make to adapt the state's civil code to the Supreme Court's ruling.