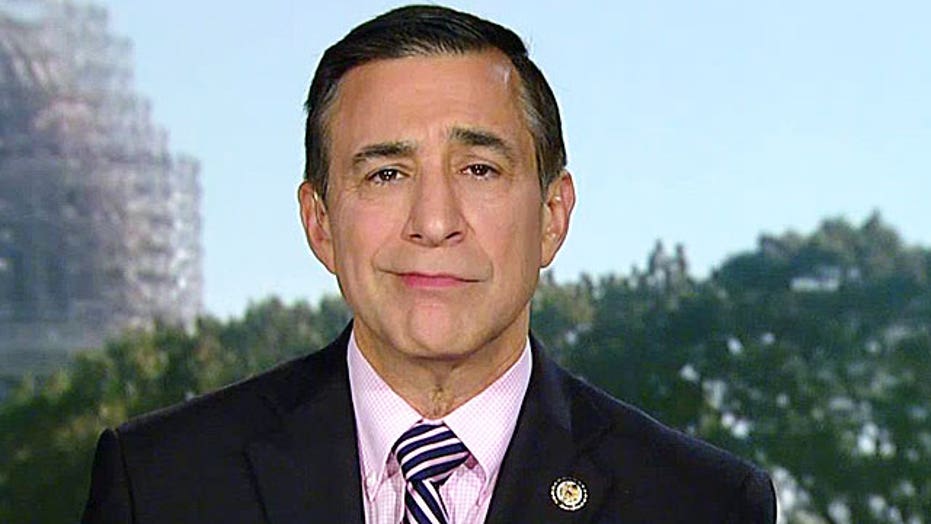 Issa reacts to Holder attacking him in Fast and Furious docs

House oversight committee Chairman Darrell Issa told Fox News on Thursday that a massive trove of emails handed to his office on the eve of the elections indicates Attorney General Eric Holder was “at the heart” of deliberations over the Operation Fast and Furious scandal.

More than 64,000 pages of documents were given to the committee Monday night, a move Issa, R-Calif., said was a ploy to make sure they didn’t sway the election. But he said his staff is starting to go through them – already, one email exchange has surfaced in which Holder in 2011 blasted Issa “and his idiot cronies” looking into the botched anti-gun trafficking operation.

In that email, published by The Wall Street Journal, Holder claimed Issa and others “never gave a damn about” the program “when all that was happening was that thousands of Mexicans were being killed with guns from our country.” He accused them of trying only to “cripple ATF and suck up to the gun lobby.”

Issa rejected the charges, saying on Fox News the culpability lies with higher-ups, not the ATF, anyway.

“This was an undercover activity that specifically cut out our allies in Mexico … so if there’s culpability, I think it really belongs with the attorney general,” he said.

The now-halted operation allowed firearms to be trafficked into Mexico so U.S. agents could track them. But many guns ended up in the hands of criminals and at multiple crime scenes, including the murder of U.S. border agent Brian Terry.

Issa said that while Holder has suggested before Congress that he didn’t know much about the program, “it looks very much like he’s CC’d on everything.”

“This is an example of where the attorney general is at the heart of this,” he said.

The documents were released to the committee in response to a court order. Issa’s office claimed the turn-over is proof the department never had grounds to withhold them in the first place through so-called executive privilege.

Justice Department spokesman Brian Fallon, though, said the department has been willing to cooperate.

“We have long been willing to provide many of these materials voluntarily in order to resolve this matter outside of court, and believe that producing them now should bring us a big step closer to concluding this litigation once and for all,” he said.

According to the department, the latest delivery includes about 10,000 documents, bringing the total provided so far to 18,000. Some documents still withheld were deemed “deliberative,” and exempt.

A DOJ official said nothing in the materials contradicts what the department has said before about the “flawed” operation, and said they affirm the finding that Holder was not aware of the tactics until February 2011.