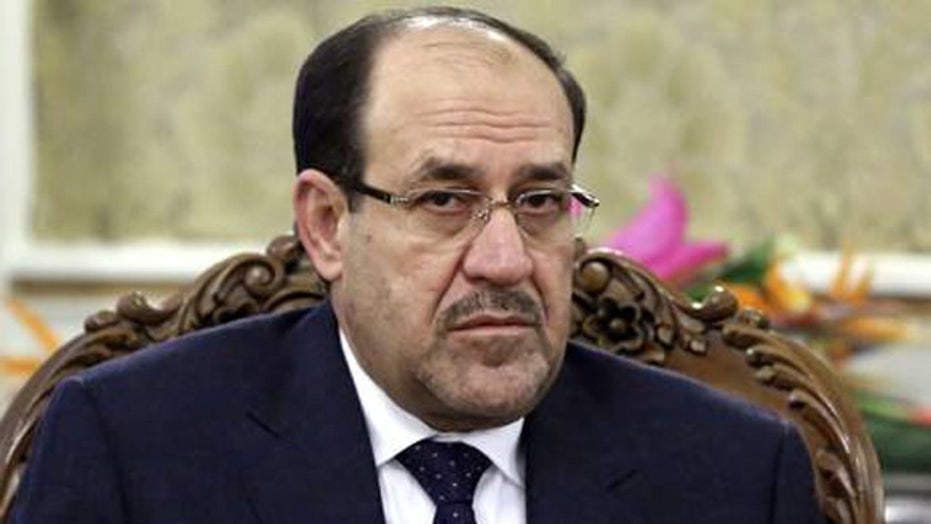 Who is Iraq P.M. Nouri al-Maliki?

BAGHDAD – Choppering into Baghdad for his first visit to Iraq since an army of Sunni insurgents began seizing major cities in an advance toward the capital, Secretary of State John Kerry began a series of critical meetings with key Iraqi politicians, in an effort to prod them towards the swift formation of a new central government.

With tensions in Iraq running high, security for the secretary's visit was extremely tight, with journalists accompanying him forbidden from reporting his trip to Baghdad until the C-17 military plane that transported the traveling party from Amman, Jordan touched down at the airport outside the capital.

Kerry met with Prime Minister Nouri al-Maliki at the latter's residence, with the Iraqi foreign minister and other senior officials present, for an hour and 40 minutes. "That was good!" Kerry could be heard exclaiming, as he and his delegation exited. Hours earlier, however, fighters from ISIS, the Islamic State of Iraq and Syria, had recently captured new territory at border crossings near Syria and Jordan.

A senior State Department official, briefing the reporters traveling with Kerry via a background conference call conducted from Iraq, described al-Maliki, a Shiite, and other senior figures in the Iraqi government – regardless of religious affiliation – as deeply unnerved by the ISIS offensive. ISIS is designated by the State Department as a terrorist organization.

"They're also very fearful of their situation," the official said. "A lot of people they've known, on the Sunni and the Shia side, over the last ten days have been killed ... Prominent leaders, their houses are gone ... And the limitations of the Iraqi security forces is [sic] very apparent ... They're very limited in the air. They have two Cessna planes that can fire Hellfire missiles. That's it, and they can't be everywhere at once. They have a limited number of helicopters. So their ability to respond to events when they are getting frantic calls from people who might be stranded or might be – it definitely takes a toll."

Even on the American side, officials displayed a degree of uncertainty as to how to conceptualize the enemy fighters. Where senior aides traveling with Kerry on this trip had previously termed ISIS "a highly capable and sophisticated terrorist organization [that] is also essentially a criminal syndicate," the official briefing reporters from Baghdad, betraying the benefit of a more informed, ground-level view of the crisis, pointedly instructed reporters to take a different view.

"It's really important to understand that it's an army," the briefer said. "There are political grievances in this country and that's a serious problem and we need to address them in order to mobilize the population to really stand up to these guys. But it's an army."

In support of that view, the briefer cited the ISIS seizure of al-Qaim, the border crossing near Syria that is situated along the Euphrates River, less than 250 miles from Baghdad.

"The al-Qaim battle lasted three days and started with artillery barrages every morning and then kind of three-pronged, very [militarily] proficient attacks," the official said. "And they eventually overtook that border crossing. And then today they turned south and took a small – few of those small dusty towns that don't have much security presence. And that's what happens if thirty trucks with 50-caliber machine guns show up."

Kerry's meetings were intended to nudge al-Maliki and his Sunni and Kurdish peers to move more quickly to establish a new parliament and cabinet, following the certification last week of the April 30 election results. While al-Maliki did not capture an outright majority, his party won the plurality of seats and in ordinary circumstances would be favored to retain control of the prime minister's seat.

Sunni and Kurdish parties, and the U.S., have been critical of what they see as an exclusionary approach to governance by al-Maliki, who has been prime minister since 2006. The question now confronting the Iraqi leaders, with ISIS growing in troop strength and funding, is whether they can overcome their longstanding sectarian differences to form a new central government in time to counter the insurgent push toward Baghdad.

American officials have said that the last week has seen the U.S. dramatically improving its intelligence capabilities in and around – and over the skies of – the Iraqi theater, as well as the establishment of joint command centers where teams of U.S. military advisers have begun counseling their Iraqi counterparts on the most effective ways to counter the ISIS threat.

But the State Department briefer portrayed the central Iraqi government as desperate for the Americans to solve the problem for them. "All of them look to us for answers and solutions and like a magic wand," the briefer said. "There's a lot of that."

At the same time, the briefer depicted the Kurdish minority, which has established a fairly stable and autonomous region in northern Iraq, as likely to benefit from the chaos. Soon after ISIS overran Mosul, Iraq's second-largest city, the Kurdish military force known as the Peshmerga swiftly moved to seize control of Kirkuk, the strategically important city with enormous reserves of oil that the Kurds have long viewed as their historic capital in their quest for full autonomy.

While U.S. officials said they would continue to encourage the Kurds to participate in the formation of a new central government in Baghdad, there was also an acknowledgment that the seizure of Kirkuk may not be reversed.

"Just look at where the Peshmerga is now compared to where they were two weeks ago," the State Department briefer instructed reporters. "Not so much out of a deliberate move but out of just the exigency of the situation. Some facts on the ground can be created that might not be reversed."