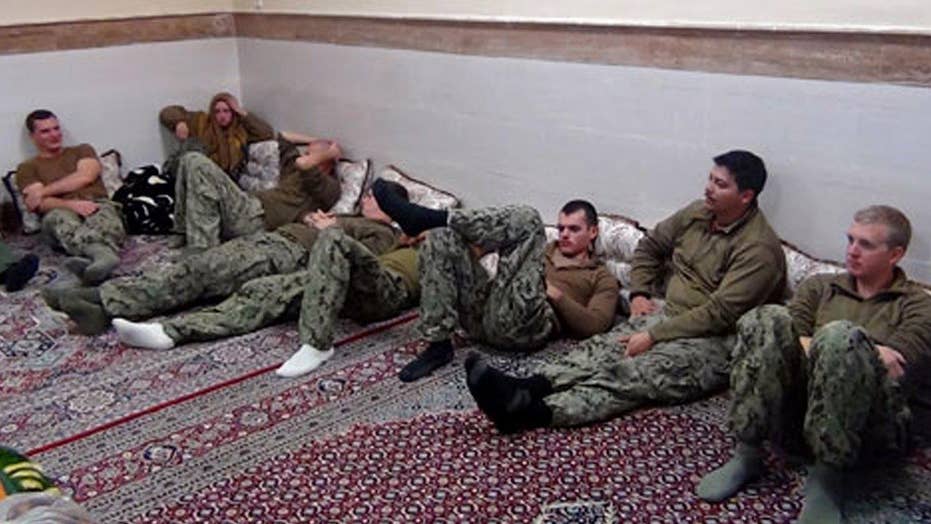 US Navy working to learn why sailors were captured by Iran

A statement said that the sailors and the boats left the Iranian naval base where they had been held shortly before 9 a.m. GMT (4 a.m. EST). The nine men and one woman were later transferred ashore by Navy aircraft, while the boats continued toward Bahrain, their intended destination. There was no indication the sailors had been harmed.

In a written statement, Secretary of State John Kerry thanked Iranian authorities “for their cooperation ‎in swiftly resolving this matter.”

A senior State Department official, though, told Fox News that there was “no apology from Kerry” to the Iranians.

A U.S. official told Fox News that the sailors were initially taken to the guided-missile cruiser USS Anzio before flying to the aircraft carrier USS Harry S. Truman for additional debriefing.

"The first concern is the safety and well being of the crew and then we will investigate the incident," the official said. The Pentagon statement also promised the Navy would "investigate the circumstances that led to the Sailors' presence in Iran."

Officials are still uncertain of how Iranian forces managed to commandeer the two boats. The U.S. official told Fox News that a mechanical problem on at least one of the boats could not be ruled out, but could not explain how both boats were able to get underway in such a short time if one did have a propulsion issue, which would have caused it to stop running and drift into Iranian territorial waters.

It was not immediately clear whether the U.S. and Iran had made a specific arrangement to secure the sailors’ release. The Iran Revolutionary Guard’s naval chief said earlier Wednesday that Iran’s foreign minister had demanded an apology from the U.S. for entering Iranian waters.

"Certainly U.S. presence in Persian Gulf and their passage has never been innocent and we do not deem their passage as innocent," Fadavi said, adding that Iran Foreign Minister Javad Zarif "had a firm stance (during a telephone conversation with U.S. Secretary of State John Kerry) on their presence in our territorial waters and said they should not have come and should apologize."

The incident came amid heightened tensions with Iran, and only hours before President Barack Obama gave his final State of the Union address to Congress and the public. Obama did not mention the sailors in his speech, which lasted approximately one hour.

After the address, Sen. Ben Cardin, D-Md., the ranking member on the Senate Foreign Relations Committee, expressed his hope for a quick resolution.

"It's a very serious issue," Cardin said. "I hope this is resolved in hours. If not, I think it escalates."

GOP presidential candidate Ted Cruz said the detention of the sailor's was a "manifestation of the weakness of Obama's foreign policy."

"Our enemies don't fear us," Cruz said before adding that his prayers were with the sailors and their families.

The Guard’s Navy confiscated the sailors’ GPS equipment to “prove that American ships were ‘snooping’ around in Iranian waters,” according to The New York Times.

The boats were moving between Kuwait and Bahrain at the time, and the Pentagon briefly lost contact with the crew. Officials said the sailors were part of the Riverine Squadron 1 based in San Diego and were deployed to the U.S. Navy’s 5th Fleet in Bahrain.

The Riverine boats are not considered high-tech and don't contain any sensitive equipment, so there were no concerns about the Iranians gaining access to the crafts.

The incident came on the heels of an incident in late December when Iran launched a rocket test near U.S. warships and boats passing through the Strait of Hormuz.

Meanwhile, Iran was expected to satisfy the terms of last summer's nuclear deal in just days. Once the U.N. nuclear agency confirms Iran's actions to roll back its program, the United States and other Western powers are obliged to suspend wide-ranging oil, trade and financial sanctions on Tehran. Kerry recently said the deal's implementation was "days away."